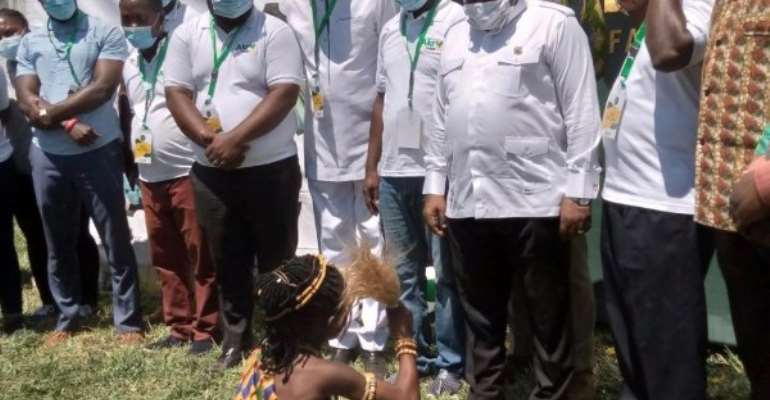 President Akufo-Addo on Tuesday cut sod for the construction of a 16-million-cedi basin drainage Improvement at Nsukwao, a suburb of Koforidua in the Eastern Region.

The project scheduled to be completed in eight months is under the Ghana Secondary Cities Support Programme.

Since 2016, Nsukwao and its environs had experienced severe flooding, leading to loss of properties and displacing many from their homes

The Ghana Secondary Cities Support Programme is being implemented in 25 municipalities and districts across 14 regions to improve urban management and services.

President Akufo-Addo, who cut the sod as part of a three-day working visit to the Eastern Region, said his government was committed to enhancing the living conditions of all Ghanaians.

She indicated that apart from the Nsukwao Basin Drainage Improvement, the Koforidua Jackson Park would be developed into a modern park with amenities including a restaurant.

He also inspected the 20.5 km newly constructed Tinkon-Amanfro road in the Okere district.

The President is billed to inaugurate the Somanya campus of the University of Environment and Sustainable Development and visit Akwamufie on Wednesday.