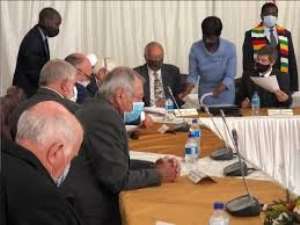 Today is a very sad day for Africa because colonial oppression has succeeded in using sanctions to force the oppressed and dispossessed to compensate the oppressor for vandalizing our land. More critically, today, a nail was also put into South Africa’s fight for land without compensation.

Many Zimbabweans do not appreciate our fight against sanctions, but that fight is about ensuring that our governments remain sovereign to make decisions that benefit the people and not foreign interests. So, while we were fighting against corruption, the Zimbabwean government was forced by sanctions to compensate white farmers. Now, the nation will take high interest debt which we will repay for the next 30-50 years.

The debt won’t build schools, hospitals or infrastructure, and when we fail to pay, it will multiply just like the $800mil Rhodesian debt we are still repaying today.

The more I think (and feel) about developments in Zimbabwe, the more I am drawn to an analysis of the psychological implications of the recent take-over by Zimbabwe's new president, Emmerson Mnangagwa and his actions in relation to white farmers and the land question.

In the very early days of "the coup", British Prime Minister, Theresa May, declared her country's support of the incoming leadership of Zimbabwe, referring to her country as Zimbabwe's "old friend".

We know that the "old" relationship between Britain and Zimbabwe, as with South Africa, is a colonial one. It is a relationship of imperialism, extraction and occupation of the richest and biggest chunks of land in the country by white settlers. So when a prime minister of a colonial imperialist power refers to an African country as an old friend, one cannot help the flashes in the mind of a reoccupation and recapture of Zimbabwean land and economy - because conquest and exploitation are definitive of the relationship between Britain and Zimbabwe.

Mnangagwa's own enthusiasm for "international investors" and their promise of "jobs" for the people of Zimbabwe is unsettling. On a recent trip to South Africa, Mnangagwa embarked on a recruitment drive for Zimbabweans to return home to rebuild their country. Note that the securing of labour for the economy was the gist of his message, not investment by other African countries into Zimbabwe; not an opportunity for Zimbabweans to own the economy, but rather to participate mainly as labour in the rebuilding of their country.

In Mnangagwa's mind, it would seem "investors ", read: legitimate owners and beneficiaries of the economy, must be British/European, and workers black Africans/Zimbabweans. The legitimation of white power over black servitude observed in Mnangagwa is internalized racism that plagues South Africa's oldest liberation movement - the African National Congress (ANC).

Back in the early 1900's, leaders of the movement traveled to Britain to petition the Queen against the subjugation of blacks by white rule. Bear in mind, it is impossible to appeal to an authority one doesn't recognize and respect as legitimate. In fact, a closer look at their mission reveals an elitist pursuit of a qualified franchise for a particular caliber of black men (with royal heritage, educated and urban).

Again, the recognition of white British authority over African territory by Africans speaks to the early psychological defeat of black leaders right at the beginning of the organized struggle. Mnangagwa is simply following the long line of African leaders who genuinely believe in the superiority of whites, and their "god-given right " to rule over us. This is not just a Southern African problem - remember the appeal Thomas Sankara made in 1984 to countries formerly colonized by France to desist from paying tax and blindly accepting aid; but rather use all their means to develop self-reliant countries and continent.

Granted, many African leaders are in the business of securing self interests that come guaranteed with selling their country's economy to "foreign investment ". But one has to wonder if there isn't another way of making a quick big buck without surrendering an entire country's riches and generational wealth to foreigners. A way that secures individual and collective interests at the same time would have to start with the belief that Africans can handle their own economies.

Mnangagwa has every opportunity to experiment with economic models that secure more ownership of the land, its resources and means of production by the people of Zimbabwe.

Europe is out looking to get back in. Zimbabwe has endured almost two decades of divestment and economic downturn. In the interest of long term sustainable empowerment of natives, the whole country can afford to take their time in negotiating a new and genuinely beneficial approach to the economy.

Mnangagwa is not taking his time. He is tripping over himself trying to reverse every gain of the land revolution in that country as quickly as possible. In fact, it seems he is too eager to make a clean break from the recent past, and return Zimbabwe to white hands as swiftly as he can. The return of white farmers, and their reoccupation of farms without compensation to the black farmers is evidence not just of an extension of goodwill to Europeans, but rather a clear message to Zimbabweans that they cannot exercise legitimate control over their land and economy. It is a message of defeat and incapacity for the people of Zimbabwe. It says blacks need whites to survive in their own country.

It is the same message being communicated to South Africa by rating agencies; that our own decisions cannot yield success unless sanctioned by Western powers. More importantly, it is not the message from the rating agencies, but our very own political and business leaders that have internalized the dictatorship of rating agencies, foreign investors and Western government sentiments over our own ideas of what we need to do with our own affairs.

In the current state, we don't have ideas of our own. We have no leadership, no land or economy nor agency outside of what the global capitalist system allows us. What we have seen so far from Mnangagwa's leadership is that once afforded some kind of leeway to make independent choices, the African leader runs to surrender to the Queen.