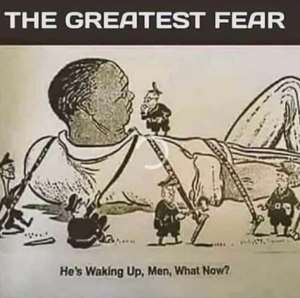 During slavery slave masters would take a Strong Black Man and execute him in front of everyone. This strategy was used to spread fear and it is still being used today.

The reason why Zimbabwe will never have a stable economy is not because white people left. There are many countries with few white people and they are doing well. You can look at China. You can look at Japan. Zimbabwe is the Strong Black Man. Zimbabwe is being executed in front of everyone to discourage other African countries from standing up to White Supremacy and discourage you from taking your land.

As punishment for creating the first free republic in the Americas (when 13 percent of the people living in the United States were slaves), the new Republic of Haiti was met with a global economic embargo imposed by the United States and Europe . The embargo was strengthened by a further demand from France for financial reparations of roughly $21 billion (2004 dollars) as compensation from the newly freed slaves for denying France the further benefit of owning them. It would be the first time in history that reparations would be imposed by a defeated nation on the nation that had defeated it.

American economic sanctions against Haiti would not end until the Emancipation Proclamation in 1863, nearly sixty years after the founding of the free Haitian republic.

In 1825, twenty-two years after L’Ouverture’s death, the Haitian army was no longer the feared fighting force it had once been. France, threatening to reenslave Haitians, imposed an ordinance requiring from Haiti a payment of 150 million francs and a 50 percent tariff reduction for all French ships docking in Haiti. To meet the first payment of 30 million francs under the terms of the ordinance, the government of Haiti was constrained to borrow the full amount from a private French bank, MM Ch Ternaux Grandolphe it Cie.

As late as 1915, 111 years after the successful slave revolt, some 80 percent of the Haitian government’s resources were being paid out in debt service to French and American banks on loans that had been made to enable Haiti to pay reparations to France.

In 1922, seven years into a nineteen-year American military occupation of Haiti that resulted in 15,000 Haitian deaths, the United States imposed a $16 million loan on the Haitian government to pay off its “debt” to France .

The American loan was finally paid off in 1947. Haiti was left virtually bankrupt, its workforce in desperate straits.

The Haitian economy has never recovered from the financial havoc France (and America ) wreaked upon it, during and after slavery.

In 1951, America imposed sanctions on Guatemala after their 25th president and revolutionary Juan Jacobo Arbenz Guzman embarked on a land reform exercise.

In 1951, the indigenous people of Guatemala took a brave stand and took their land, which had been shared among a few white families and USA and Anglo American Conglomerates. This move by the Guatemalans did not go down well with the Americans and their allies and hatched a propaganda blitz demonising President Juan Jacobo Arbenz Guzman.

This was followed by the imposition of economic sanctions and after 10 long years of sanctions and suffering the Guatemalan army ousted their president under the instigation of USA and their conglomerates.

The Guatemalan army thought that only their president was the problem and after eliminating him they believed that sanctions would be removed, but USA told them that the embargo could not be removed since, they, the army was part and parcel of the old regime (the same old Taxi with a new driver).

They were then told to hold so called free and fair elections in which they could contest with an opposition party, which was being sponsored by the USA.

This opposition party was recruited from the indigenous people, but directed by the CIA under Dulles and George Bush senior. The elections came and the opposition won them, but still sanctions were not removed. The reason given by USA was that this party was a Red Indian party and it was, they, the indigenous people, who had robbed the whites and the USA conglomerates of their land.

So, what they needed to do was to reverse the land ownership rights to what they were on 31 December, 1950. This meant the return of land to the whites, before the sanctions could be removed. They agreed to do that, but still sanctions were not removed.

The next condition given was that the USA would give the money to the white farm owners, so that they could revive their farms which had been vandalised by the Red Indians, but this money was going to be paid back by the Red Indian government through taxation of their indigenous people. They also agreed to that, but still sanctions were not removed.

The last but most brutal and final condition was that the Guatemalan government had to cut the reserves where their Indigenous people were living in congestion by 75 percent and give that land to the whites as compensation because the whites needed to cover up for the 10 years’ loss of production which had been caused by the land reform. Also, all the Communities whose land had been included in this 75 percent had to automatically become compulsory farm labourers of the new white owners.

This was agreed upon and up to today the indigenous people are living on 25 percent of their land while a few white families and United Fruit Company and other European Conglomerates occupy 75 percent of the land. Guatemala today is the biggest producer of the so-called Euro Banana. The standard banana, which is shipped to Europe at the cheapest price. The money from these products goes to USA and Europe leaving the Guatemalan indigenous people being one of the poorest communities on the planet.

Our situation in Zimbabwe is not so different from the one Guatemala experienced. The USA and its allies made it clear that no sanctions will be removed as long as the land ownership rights in this country have not been (reversed) and returned to the minority white Rhodies.

What colleagues who oppose the removal of sanctions miss is that sanctions are not likely to be removed even if the opposition gets into power as long as they do not reverse the land reform programme.

It is thus, imperative as Zimbabweans to remain united in our steadfast opposition of sanctions. We do not want to be another Guatemala where citizens have literally become squatters in the land of their birth.