Agya Koo Nimo: The Golden Tongue Comes To Life In: Six Strings And A Note 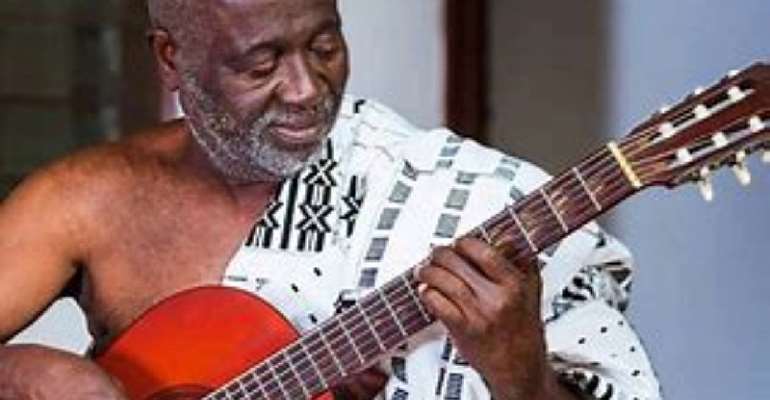 Agya Koo Nimo is one of the most gifted persons in our country, Ghana.

He has a golden voice, which would be enough for most other persons.

But, in addition, he also has a brain – and that’s not all that common in humans.

No; not for Koo Nimo.

For his life’s equipment further includes the gift of the gab: he can make you laugh with a story, but even as you laugh, you’ll realise that you’re being taught a lesson, which has practical application to the life you lead.

I could go on and on about this man (whom I have never had the pleasure to meet face to face, but who is ever-present in my consciousness).

But I don’t want to leave only crumbs to be collected by others who might want to partake in the feast his life has spread on the table for all of us.

So, finally, I draw attention to his generosity of spirit. Although he is in his late eighties, he possesses the memory of a young person who’s at the height of his mental powers. And God helps you if you have ever done him a favour, for whether you like it or not, he will remember your kindness and include your name in the persons he has met in his long life, towards whom he feels gratitude. The warmth of his friendship and love is something I would have liked to experience.

In fact, in the book about himself that he has inspired Obeng-Amoako Edmonds to write, Six Strings and a Note (obtainable from Amazon @US $18.00) Koo Nimo spends about three whole pages acknowledging the generosity that people have showered upon him. One reads the list and wonders: how come he remembers all these people? He genuinely does! – and in this case, the truth is: “the more the merrier.”

Yes -- others might think that he does rather go on and on, but I have no hesitation in confessing that I was tremendously impressed by the precision with which he recalls names and the deeds that he associates with them.

What a man Koo Nimo is! How many people would do this? Especially if they were artists of the first order, whose usual characteristic is to inhabit an ego so huge that they often regard people they come across in life as mere instruments placed in their path by Providence to accentuate their superiority over other humans?

Mr Obeng-Amoako Edmonds must be congratulated on not falling into the trap of regarding these myriad tributes as the ramblings of an old man’s mind, and (as most publishers would have done) editing them out. For they allow Koo Nimo’s true character to shine through the book effortlessly.

The book is 315 pages long, and I shall do the reader no favours if I try to summarise it. You just have to get it! Once you’ve begun to read it, you can’t put it down. For Koo Nimo has led a most eventful life: a small child from a small Asante town called Ofoase, who happened to obtain access to Manhyia Palace, Kumase, and learn music and oratory from Otumfuor the Asantehene’s own minstrels, hornblowers and drummers at first hand. The vast treasure of Asante music and culture became open to him from a very early age. Its riches are therefore strewn across his musical journey and the consequent output.

But he does not only dwell on the richness of the past. He sifts it with his native wit and thereby opens it all up for everyone who takes the trouble to listen to his lyrics and seek an authentic explanation of what they do not fully understand.

Koo Nimo’songs are full of instances of the ironies we all meet in our daily lives. It was my friend Ben Kidd who told me that he had heard this question asked in a favourite song: ‘If you’re a driver and you give your wife chop money in the morning before you go to work, and then, during the day, you come across some bush meat on the roadside and you buy it and bring it home, does your wife give you a refund of the chop money you had left behind?” Answer: Hahahahahaha!

Another song narrates the story of a poor person who goes to a rich man to try and borrow some money: “The rich man first makes you tell him everything you could possibly say about your circumstances, and when you’ve finished, he turns to you and says, ‘You didn’t come early enough – someone else who came before you has collected all the money I have on me!”

And then, there’s this -- with a more pointed lesson for the youth who do not normally appreciate why their elders do certain things: “A young lad saw his grandfather, aged 90, planting a coconut tree. The young lad asked, “But Grandpa, this coconut you’re planting, it won’t bear fruit before you die? And even if you don’t die, your teeth would have become too weak to eat coconuts with, if they have not been ejected from your mouth already?’ The old man replied, “ You see the tree under which I am now sitting to relax? It was not I who planted it but those who came before me. In the same way, I have to plant things for you too to come and enjoy, and not think only of what I can make use of!”

Unfortunately, Koo Nimo’s personal life has been replete with tragedy: one wife died shortly after giving birth to a child, who also died. Remarried, he has buried as many children as those that have survived. His very good friend – and friendly rival – ace musician Kwabena Onyina, has preceded him to the far beyond.

But he’s ever cheerful. He has served the Ghanaian musical community as much as possible, having once been president of the Ghana Musical Association. During his tenure, he was one of the principal instigators of the enactment and enforcement of copyright law for musicians. His own recordings are too many to list here.

He has received a national medal, plus an award from the Asante Nation. The Kwame Nkrumah University of Science and Technology, where he was once a chemistry teacher, has given him an honorary doctorate of philosophy degree.

Asked in a recent TV interview whether he was not afraid of death, he quoted the philosophers George Santayana and Socrates: death is a necessary component of the “journey of life”, and so there’s no need to fear it!

Well spoken, Agya Koo. I have only one request to make of you, Sage: Time: if the Almighty gives you the strength and the Inspiration, please produce a nice, eloquent song to warn our youngsters engaged in galamsey that our Ancestors will curse them if they continue to destroy the water-bodies they came to meet in the blessed land of Ghana. Water-bodies like Tanoh Kronkron; Prah; Offin; Ankobra; Oti, Birem and Densu.

Meanwhile, I wish you continued long life, contentment and happiness. May God bless you! You have indeed served your Nation.