Nkrumah And Blyden An Early And Lasting Influence

Written and first published in 2007
By Isa J. E. Blyden 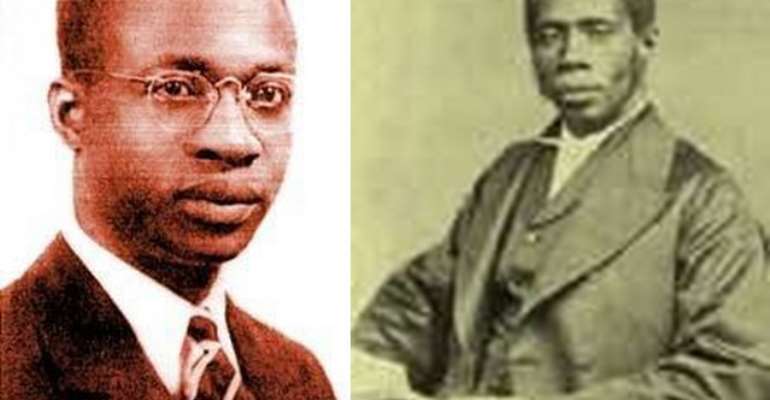 The Year 2007 promises to fill West African history with singular events from the annals of West African history. Edward Wilmot Blyden, “Father of Pan Africanism” celebrates 175 years, Liberia that shaped Dr. Blyden celebrates 160 years, Sierra Leone celebrates 220 years of freedom, and Ghana celebrates 50 years of sterling, professional independence, her proud contributions to progress and development is worthy the acclaim, admiration and festivity of populations the world over. Many will travel to this wonderful country nestled between countries less defined about themselves, to pay homage to Kwame Nkrumah--The lone figure that in the 50s and 60s of last century familiarized the world with his beloved Ghana and his West Africa, and later on his dream of a unified Africa. His dream was not unprecedented: there had been forerunners or contemporaries who with ” pen in cheek” pamphleteered the idea and definitions for an African personality, as being unique and indeed without precedence.

One of the most notable for becoming a self-avowed champion of the African race would influence and promote African race consciousness in West Africans and in small European circles during the latter half of the 19th century: Edward Wilmot Blyden born in St. Thomas Danish West Indies, and ended his days in Sierra Leone after a full and dedicated life in the realization of his mission: “Let me forever be scorned by the white race and condemned by the Black if I do not do all in my power to vindicate the African race…” His legacy which he avowed “millions would stand up to continue his work” left a legacy of ideas and concepts that were taken up by a wealth of Africans or those of African descent: William Dubois was inspired by Blyden’s pamphlet titled, “The Negro in Ancient History”.

Marcus Garvey would be inspired by Blyden’s appeal in lecture and pamphlet or sermon to African-Americans to return to Africa to contribute to development. As a young man he writes to the Curator of the British Museum Frederic George Kenyon:

Re my letter of the 6th inst^2 making application for admission to your reading room I further beg to inform you that the special purposes for which I would like to use the said room are "Reading the works of the late Dr. Edward Blyden LL.D^3 and other works that are not obtainable in any of the other libraries of London, as also to scan certain copies of old journals that are /not/ obtainable elsewhere. ["]

Knowing your willingness to assist those in need of that knowledge that is under your keeping I now feel assured that you will consider my purpose befitting the condition under which your department is seen. ^4 Yours faithfully

“ You who do not know anything of your ancestry, - Garvey would remark later on during his checkered career, - will do well to read the works of Blyden, one of our historians and chroniclers, who has done so much to retrieve the lost prestige of the race."

And he was given access. The Back to Africa Movement would be the continuation.i

In Africa, nationalist movements at the beginning of the 20th century led by clergymen and educators rippled through the West African intellectual circles. Today, Blyden is rarely if ever remembered as contributing to the early concept of Pan Africanism. Nor is it remembered that William DuBois invited him to attend the first Pan African congress held in London in 1900.

Kwame Nkrumah would be nurtured in the Blyden-influenced tradition of intellectual regeneration.

“Nkrumah deepened his studies into classic African civilizations by attending meetings of the Blyden Society for the Study of African History in Harlem, New York, during summer breaks. The society, named in honor of the great 19th century pan-Africanist scholar Edward Wilmot Blyden, author of the prodigious Christianity, Islam and the Negro Race,” {…} While a freshman at Lincoln, Nkrumah won second- place in an oratorical contest.

Indeed, in his student days his skills in oration would earn him merit and award. Much inspired he must have been by Dr, Edward Wilmot Blyden’s orations and speeches that, “Upon graduating from Lincoln’s seminary school, he delivered the “graduation oration” on a topic dear to black nationalists for at least a century before him: “Ethiopia shall stretch forth her hands unto God.” ii

This is what the text of Nkrumah’s graduation oration reads like:

“Africa is no vast island separated by an immense ocean from other portions of the globe, and cut off through the ages from the men who have made and influenced the destinies of mankind. She has been closely connected both as source and nourisher, with some of the most potent influences which have affected for good the history of the world.

The people of Asia, and the people of Africa have been in constant intercourse. No violent social or political disruption has ever broken through this communication. No chasm caused by war has suspended intercourse. On the contrary, the greatest religious reforms the world has ever seen – Jewish, Christian, Mohammedan – originating in Asia, have obtained consolidation in Africa. And as in the days of Abraham and Moses, of Herodotus and Homer, so to-day, there is constant accessible highway from Asia to the heart of Soudan. Africans are continually going to Liberia and along its eastern frontiers, Mohammedan Negroes, born in Mecca, the Holy City of Arabia, who thought they were detailing the incidents of their journeying and of those of their friends form the banks of the Niger-from the neighbourhood of Sierra Leone and Liberia – across the continent to Egypt, Arabia and Jerusalem. I saw in Cairo and Jerusalem some years ago, West Africans who had come on business or on religious pilgrimage from their distant homes in Senegambia.

Africans were not unknown, therefore, to the writers of the Bible.

Their peculiarities of complexion and hair were as well known to the ancient Greeks as they are to the American people today. And they spoke of the Ethiopians, they meant the ancestors of the black-skinned, woolly- haired people who for two hundred d and fifty years have been known as labourers on the plantations of the south. It is to these people to their country that the Psalmist refers when says, Ethiopia shall soon stretch forth her hands unto God. The word in the original, which has been translated as soon, is now understood to refer not so much to the time as to the manner of the action. Ethiopia shall suddenly stretch out her hands unto God, is the most recent rendering.

But even if we take the phraseology as it has been generally understood it will not by any acquainted with the facts, be held to have been altogether unfulfilled. There is not a tribe on the continent of Africa, in spite of the almost universal opinion to the contrary, in spite of the fetishes and greegrees which many of them are supposed to worship – there is not I say, a single tribe which does not stretch out its hands to the Great Creator. There is not one who does not recognize the Supreme Being, though imperfectly understanding His character – and who does perfectly understand his character? They believe that the heaven, and the earth, the sun, the moon, and stars which they behold, were created by an Almighty personal agent, who is also their own master and sovereign. And they render to Him such worship as their untutored intellects can conceive.

{…}There are no atheists or agnostics among them. They have not yet attained, and I am sure they never will attain to that eminence of progress or that perfection of development; so that it is true in a certain sense that Ethiopia now stretched out her hands unto God.

And if the belief in a Common Creator and Father of mankind is illustrated in the bearing we maintain towards our neighbour, if our faith is seen in our works, if we prove that we l love God whom we have not seen by loving his neighbour whom we have seen, by respecting his rights even though he may not belong to our clan, tribe or race, then I must say , and it will not be generally disputed, that more proofs are furnished among the natives of interior Africa or their belief in the common Fatherhood of a personal God by their hospitable and considerate treatment of foreigners and strangers than are to be seen in many a civilized and Christian community. {…}And this peculiarity of Africans is not a thing known only in modern times. The ancients recognized these qualities, and loved to descant upon them. They seemed to regard the dear and love of God as the peculiar gift of the darker races. In the version of the Chaldean Genesis, as given by George Smith, the following passage occurs” ‘The word of the Lord will never fail in the mouth of the dark races that He has made.’ Homer and Herodotus have written immortal eulogies of he race. Homer speaks of them as the ‘blameless Ethiopians,’ and tells us that it was Ethiopians alone among mortals whom the Gods selected as a people fit to be lifted to the social level of the Olympian divinities.

But there is another quality in the Ethiopian or African, closely connected with the preceding, which proves that he has stretched out his h hands to God. If service rendered to humanity is service rendered to God, then the Negro and his country have been, during the ages, in spite of untoward influences tending upward to the Divine. (..)

Take the country. It has been called the cradle of civilization, and so it is. The germs of all sciences and of the two great religions now professed by the most enlightened races were fostered in Africa. Science in its latest wonders has nothing to show equal to some of the wonderful things even now to be seen in Africa. In Africa stands that marvelous architectural pile- the great Pyramid – which has been the admiration and despair of the world for a hundred generations.

“Ethiopia Shall Stretch Forth Her Hands unto God.” Edward Wilmot Blyden (1882}

i … An anecdote in our family history as narrated by my father (, Edward Wilmot Blyden III, (Blyden’s grandson), was of Garvey sending his wife to visit my grandmother and great-grandmother around 1822 when my father was four years old. He narrates that she brought a message from Marcus Garvey that the movement had started and all was going well. —Isa Blyden This is all historical lyricism…

Inside Politics: Political Quotes
Catch up with all the political quotes from our politicians.
Sponsored
More Article
Modern Ghana Links
Ghana's unstable building problem is about more than lax regulation
How Kenya's new personal data protection law could affect researchers
Pasha 92: How we discovered two new giant radio galaxies
How young Kenyans feel about farming goes against conventional wisdom
Jonas Gwangwa embodied South Africa's struggle for a national culture
The approved covid-19 vaccines: Series of clinical trials is the way to go in Ghana
Why wait till I am no more?
South African minister's COVID-19 death unites friends and rivals in tribute
The copy ‘Cat is out of the Bag’!
Election Reports Quotes Dossiers
TOP STORIES