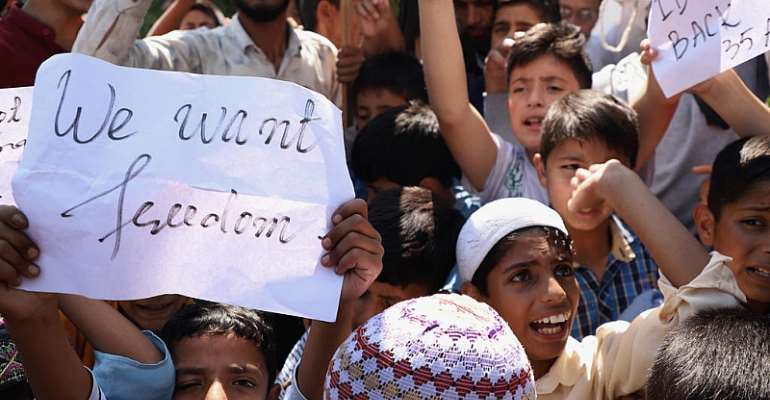 Indian-controlled Kashmir, the disputed Muslim-majority region bordering Pakistan, has been under direct rule since 5 August last year. At least 4,000 activists, students and opposition politicians have been detained.

Since the imposition of direct rule twelve months ago, the Indian government has banned mobile phone networks and internet services. Schools, shops and road raffic were shut down and shopkeepers shuttered their businesses in protest. In the six months since the crackdown was implemented, the region's economy has been severely disrupted.

Zuhaib Hilal, a 19-year-old from Srinagar in Indian-controlled Kashmir, started helping his father at his wholesale automobile business when he quit school. He hopes to become a successful Kashmiri businessman. “Schools usually remain shut because of the sudden unrest, so one loses interest in studies,” Hilal says.

His father also sells famed Kashmiri shawls, which have delighted women around the world for centuries. He gave responsibility for the automobile business to his son, who made a huge profit much faster than his father ever had.

In early 2019, Hilal began selling spare parts full-time. He also invested all his money in the business. He told RFI that, at the pace he was going, he was sure he would achieve huge success. “But I had no idea we would face a strict lockdown for almost a year that would ruin my business.” That lockdown was imposed by the Hindu-Nationalist government led by Prime Minister Narendra Modi to stop any resistance to the move in which the contested region was stripped of its autonomous status.

The region is facing rebellion against New Delhi's rule and last August's move is believed to be reducing the exclusive rights of natives and allowing people from other parts of India to settle in the Muslim-majority region.

On 5 August 2019, the Indian government revoked the special status of Kashmir (limited autonomy granted under Article 370 of the Indian Constitution to Jammu and Kashmir) – a disputed region controlled by India which has been the subject of dispute between India, Pakistan and China since 1947. Revoking Article 370 was part of the ruling party's manifesto in 2019 elections, in which it won a landslide victory.

Modi's government argued that the article has prevented the region's development and its integration with India. But in the past year, almost no developments have been seen on the ground. People in Indian-controlled Kashmir have become frustrated as most of them have lost their businesses and jobs.

Students have not gone to school for a year.  They feel frustrated with the speed of the internet which, under the added restrictions of the Covid-19 lockdown, has become a barrier preventing them from attending online classes like the rest of India's students. According to the Washington Post newspaper, Kashmir's internet ban is the longest ever in any democracy. The government claims that anti-national elements are misusing the internet, obliging the authorities to restrict it to low speed.

Hilal said that he lost all contact with his clients outside the region, following the scrapping of Article 370. “My payments were stuck with my clients but I could not contact them from my prepaid number, which was banned. I tried calling them from another number but they refused to recognise me,” he says.

In October 2019, post-paid networks came back online, followed by low-speed internet in January 2020. Then things took a U-turn in March when the government imposed the Coronavirus lockdown on 75 districts, which also included Indian-controlled Kashmir.

After the back-to-back lockdowns, Hilal has spent almost every penny supporting his mother and two siblings. “My father was stuck in Kolkata because of the pandemic, my family was entirely dependent on me,” he says.

Along with his few friends in his locality at Soura, Srinagar, he had also started helping the poor and needy. He said he helped almost ten families with money and food. “They would have died of hunger and nobody would have noticed,” he said.

'Government is destroying us'

According to an estimate by the Kashmir Chamber of Commerce and Industry (KCCI), the region's economy suffered losses of hundreds of millions of rupees since August 2019.

KCCI data shows more than one hundred thousand people working in the private sector have lost their jobs. Tourism, one of the mainstays of the local economy, has come to a halt and is unlikely to resume for a long time.

Hilal has no idea about his future, with his business now lost.

He told RFI that in any other place, life would have been different for him. “Who can be a successful businessman here? Nobody. The government is destroying us in the worst possible way."