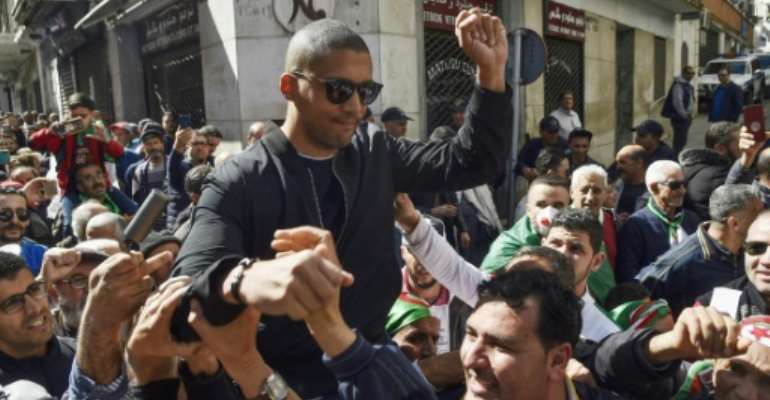 Journalist Khaled Drareni is seen at a demonstration in Algiers the day before his arrest in March. By RYAD KRAMDI (AFP/File)

The trial opened Monday of Algerian journalist Khaled Drareni, who has become a figurehead of press freedom in the North African country, with the prosecution calling for a four-year prison term.

The prosecutor at the Algiers court also called for Drareni's two co-accused to be jailed for four years, as well as all three facing heavy fines and being stripped of their civic rights, judicial sources said.

Drareni, 40, who ran the Casbah Tribune website and was a correspondent for French-language television channel TV5Monde, was arrested in March while covering an anti-government protest.

He is accused of "inciting an unarmed gathering" and undermining the nation's "territorial integrity", charges he denies.

Press freedom watchdog Reporters Without Borders (RSF), for which Drareni also works, has called for the charges to be dropped.

Drareni appeared by video-link from prison, an AFP journalist said.

RSF tweeted that the prosecutor's demand was "shocking" and that Drareni had "only exercised his right to inform". It called for his immediate release.

Several Algerian and international human rights and media freedom groups have urged the government to release Drareni and end the harassment of independent media.

Weekly protests by the "Hirak" movement rocked Algeria for more than a year, and only came to a halt in March due to the coronavirus crisis.

Drareni is being tried alongside two members of the protest movement, Samir Benlarbi and Slimane Hamitouche.

Unlike Drareni, they were released on bail in July and were both present in court on Monday.