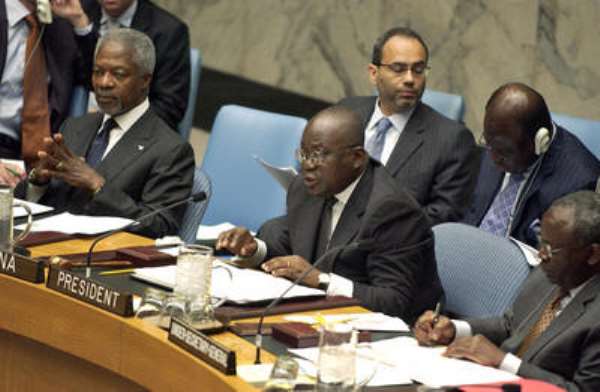 Africa is or should be able to solve its own problems, Ghana's Foreign Minister Nana Addo Dankwa Akufo-Addo said Wednesday in New York. Former Liberian president Charles Taylor, currently in The Hague on charges of war crimes, should have been tried in Africa, according to Minister Nana, who noted that "it would be anomalous for Milosevic to have been tried in Freetown." He added that the indictments by the Hague-based International Criminal Court of the top five officials of the Lord's Resistance Army rebels from Uganda should be put on hold pending peace and amnesty talks being held in Juba in South Sudan between the LRA and Uganda's Yoweri Museveni government.

Ghana, which holds the presidency of the UN Security Council this month, had scheduled a full day open session on West Africa peace consolidation. Ghanaian Foreign Minister Nana began by noting that while "events in the Middle East are important, there are other important events in other parts of the world. I think it is just as well that a balance is established to show that the concerns of humanity are not just focused on one region but focused on all parts of the world that need consideration and discussion."

In responding to seven questions from Inner City Press at the conclusion of the afternoon session, ranging from Ivory Coast through Liberia to Uganda and Zimbabwe, Minister Nana sketched out an Afro-centric vision of justice and "peace on the Continent." He expressed hope that diplomatic relations between the world community, specifically the United Kingdom, and the Robert Mugabe government in Zimbabwe can be improved.

Responding to concerns that Mr. Mugabe's appointed mediator and former Tanzanian president Benjamin Mkapa is too close to Mugabe to be seen as independent, and that Kofi Annan erred in deferring to Mr. Mkapa, Minister Nana said, "I prefer to wait and see." He responded similarly when asked about the peace talks with the Lord's Resistance Army. "Talks for peace? That has to be good, right? We must wait to see what happens."

Thursday Kofi Annan's spokesman was asked by Inner City Press to respond to these "wait and see" views. At the televised noon briefing, the spokesman said that the indictments are for the ICC to comment on, but that "the Secretary-General and the UN system do not condone impunity." He stated that countries which are signatories to the ICC's Rome Statute, which included Uganda, must arrest and turn over indictees to the ICC in The Hague. More generally, he stated that "each post-war situation calls for a different solution, drawn up by governments themselves." This appears to apply to the UN's silence on the offer of a colonel's position in the Congolese army to Peter Karim, who took seven UN peacekeepers hostage for over forty days. The spokesman closed with a reference to the UN's new Peacebuilding Commission, which is focused in part on Burundi.

Turning to The Hague, the chief prosecutor of the International Criminal Court Luis Moreno-Ocampo has repeatedly reminded Uganda and the Democratic Republic of Congo, where LRA leaders Joseph Kony and Vincent Otti are reportedly staying, of their duties to enforce the ICC's arrest warrants for both men and three other LRA leaders. From Wednesday's statements by Ghanaian minister Nana, it appears clear that Ghana, or its foreign minister at least, has doubts about the indictments. In the sphere of lobbying, some have begun to call for the ICC "to employ Article 53(4) of the Rome Statute, under which the Prosecutor can reconsider a decision at any time based on new facts or information.'"

Of Charles Taylor, Minister Nana complained that too many "are talking as if he has already been convicted."

In a separate interview Tuesday with the United Kingdom's permanent representative to the UN, Emyr Jones Parry, Inner City Press inquired into reports that the UK is promoting a draft security council resolution to allow the use of force and crossing of borders into the Congo to pursue the LRA and its leadership. Ambassador Jones Parry confirmed that the UK is drafting such a resolution.

On another matter before the Security Council, the request to remove the sanction on the trade in Liberian diamonds, Minister Nana noted that ECOWAS has called for a lifting of all sanctions with economic impacts, by implication including the diamond sanctions. Mr. Nana said, " if as we see a responsible and accountable government is beginning to put its feet down in Monrovia, there's every reason to assist that process by enabling them to have access to more and more money to do the work they need to do to consolidate peace in their country."

The Security Council is also actively seized of the situation in Ivory Coast in the run-up to the elections now scheduled for October 31. Inner City Press asked Minister Nana if he expects that deadline to be met. Mr. Nana responded that "increasingly most of us have recognized that may not be feasible," but that the need to maintain momentum should "guide all actors in the Ivorian drama." Asked to respond to Laurent Gbagbo's recent statement that he will remain in power even if elections are further delayed, Minister Nana said he is "not in a position to comment on the Constitutional propriety either way."

During Wednesday's open Council session, UN Secretary-General Kofi Annan spoke of the competing needs for reconciliation and for strengthening the rule of law. Wednesday Inner City Press asked Mr. Annan's spokesman to prioritize these two. The spokesman's response noted that "the Secretary-General and the UN system do not condone impunity" and that "justice must be served without delay." In the tinted glass building on Manhattan's East River bank, the statements are straight-forward. Out in zones of conflict, particularly out of the media's spotlight like the deal in East Congo with Peter Karim, the messages get lost. Nor, some note, has peace as yet resulted.