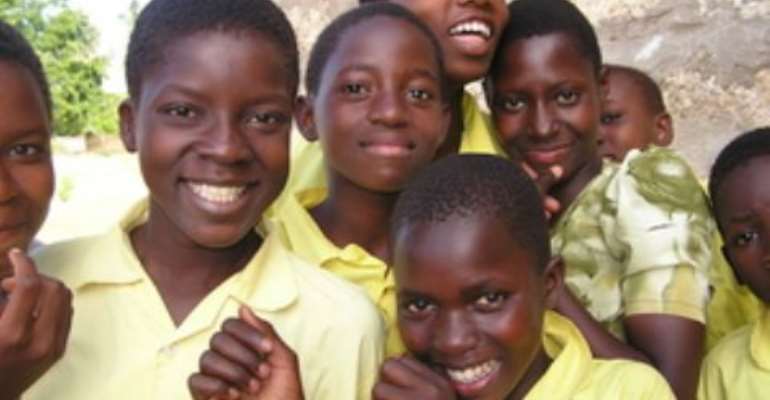 Obuasi-Ashanti Region, GNA - The Obuasi Municipal Directorate of Education is setting up a 50 million cedis fund to support needy girls in the payment of their admission fees to senior secondary schools.

Mrs Evelyn Benewoe, the Municipal Girls' Education Officer, told the Ghana News Agency at Obuasi that for the past three years, a number of brilliant girls had not been able to enter secondary school, because of the admission fees.

"Last year, six of our girls had admission to various secondary schools, but could not enter because of the initial fees of between 1.8 to two million cedis", she stressed.

Mrs Benewoe said the fund was aimed at assisting such girls to enter secondary school, since there were few organisations, who were prepared to offer two or three scholarships to girls but first wanted them to be in school.

She observed that, there were really needy children in the Obuasi municipality, who needed to be supported, that was why they had started lobbying for scholarship elsewhere to support their education.

She commended the Provident Insurance Company, the Adansi Rural Bank, Agricultural Development, Ghana Commercial Bank, Odotobri Rural Bank, Lizmart Shopping Centre and National Investment Bank among others for their support to the fund.

Mrs Benewoe said the fund account number at the Obuasi branch of the Agricultural Development Bank was 6041500072303 and appealed to well-meaning people and organisations to contribute to the fund.

Commenting on the fund, Mr Joseph K. Onyinah, the Municipal Director of Education, said the directorate wanted to encourage more girls to pursue senior secondary education, hence the setting up of the fund.

He said the educational empowerment of girls, who were the future women, was very crucial to the development of the nation and therefore, appealed to all stakeholders in education to contribute to the fund.

Mr Onyinah said the initiative and vision of the Girls Education Unit of the directorate were laudable, which needed to be encouraged and supported.

He appealed to financial institutions, traditional authorities, philanthropists, municipal and district assemblies, as well as non-governmental organisations to support the promotion of girl-child education.