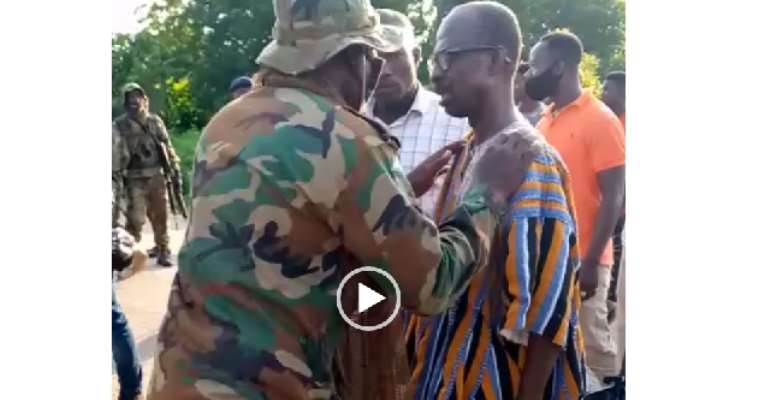 The General Secretary of the largest opposition National Democratic Congress(NDC) has taken a swipe at the Ghana Armed Forces asking the military to act decisively against the alleged intimidation of some Ghanaians from registering in the ongoing voters’ registration exercise.

“I have heard that the military high command has issued a statement denying the happenings. That is unnecessary. They should rather be concerned about the security of this nation and ensure that the citizens of this country are not disenfranchised or blocked from registering,” he told host Bonohene Baffuor Awuah.

The Public Affairs Directorate of the Ghana Armed Forces in a reaction to the confrontation between the NDC scribe and the military in Banda said the military were detailed in the area to essentially support the REGSEC brokered agreement entered between the two main parliamentary candidates following some skirmishes.

“No specific ethnic group was targeted in this regard,” a statement signed by the PRO, Colonel E. Aggrey Quashie said.

But General Mosquito maintained that what is happening smacks of “ethnic profiling”, adding “this is a condemnable international crime; similar thing is happening in Rohingya.”

The General Secretary of the opposition NDC party, Johnson Asiedu Nketia over the weekend clashed with military personnel stationed at Banda in the Bono Region over the soldiers’ refusal to allow some residents to register in the ongoing voters’ registration exercise.

In a video available to Kasapafmonline.com, the NDC Scribe is seen angrily exchanging words with the soldiers who had blocked the road to stop busloads of people from accessing registration centres.

It is unclear where the people were being bused from.

The NDC has had cause to complain over what they say is the use of military personnel to intimidate some legitimate Ghanaians from registering on the basis that they’re foreigners being bused from border towns into Ghana.

“The road President Akufo-Addo is taking our beautiful country through, using the military and party thugs to stop people from exercising their right to register and vote in the upcoming December elections, is dangerous and unacceptable,” the NDC Flagbearer said.