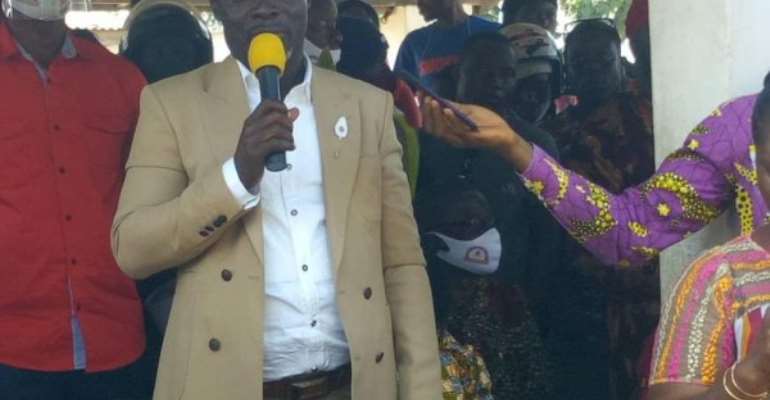 The Founder and Flagbearer of the Ghana Union Movement (GUM) has said God has sent him to rescue the country from the claws of the two major political parties, Reverend Christian Kwabena Andrews.

He said since the return to democratic rule in 1992, the New Patriotic Party (NPP) and the National Democratic Congress (NDC) were the only parties at the helm of affairs, plunging the country from one crisis to another instead of steering the wheels to development.

Mr Andrews, also known as Osofo Kyiri Abosom, who was speaking during his visit to the Ketu South Municipality to introduce himself and the Parliamentary Candidate for the area to Chiefs said Ghanaians, especially the youth, who suffer the most from the mismanagement of state resources must give him and GUM, a chance in the 2020 elections for the desired change.

“We're going to revive all the factories and all the good policies our first President Dr Kwame Nkrumah initiated to make Ghana a prosperous country. I am not a politician but a man of God, who has been sent to deliver Ghana from NPP and NDC and I'll never betray you.”

The Founder and General Overseer of the Life Assembly Worship Centre in Accra said it was unfortunate that Ghana with all her natural resources such as gold and bauxite remained a poor country with the majority of the citizenry living in penury.

He pledged to leverage on a free port for Ghana, industrialisation, improvement in agriculture production, among others to turn the country's fortunes around for prosperity for all and generations to come if given the nod on December 07 to be the President of Ghana.

General Joseph Nunoo-Mensah, former Chief of Defence Staff of the Ghana Armed Forces, who was part of the GUM delegation to pay separate visits on Paramount Chief of Aflao and Dufia of Nogokpo on Saturday, endorsed the party saying, it was a good party determined to bring Ghana back on the track to development.

He said instead of causing divisions, governments must make efforts to bring the citizenry to hold hands in the true spirit of brotherhood as envisioned by Dr Kwame Nkrumah at the time of Ghana's independence for the good of all.

Torgbui Amenya Fiti V, the Paramount Chief of Aflao, said the country needed the participation of true men of God in politics to ensure sanity in the way the running of the country.