The Folly Of Religiosity In Africa 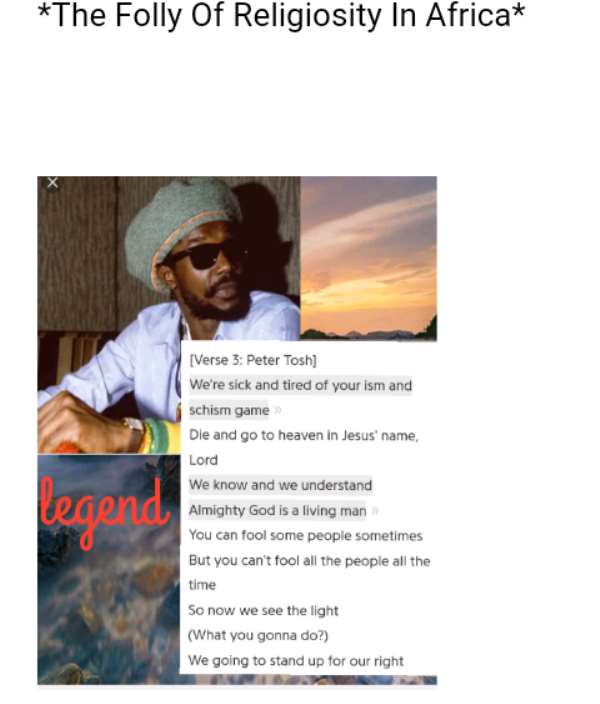 The third verse of the Wailers' Get Up, Stand Up hit song records the legendary Peter Tosh giving this revolutionary moral stance, as: "we're sick and tired of your ism and schism game. Die and go to heaven in Jesus' name, Lord. We know and we understand, Almighty God is a living man. You can fool some people sometimes, but you can't fool all the people all the time. So now we see the light, what you gonna do? We're going to stand up for our right".

The Jamaican reggae icon of African descent said this decades ago, and as it's said in my native Goka, 'the tongues of the prophets of old never rot', his words are still relevant in our lives today as it was at the time he said it. The ills of today's religiosity even makes the words of the martyr needing much review and adaptation than to them whose ears drank it afresh then.

Here in Ghana, watching TV3 Morning Show on Friday, thirty-first July, 2020, bespoke of the Muslims Eid celebration, there were these two panelists that came to stoke the ravaging flames of the ism and schism Peter Tosh laid down his precious life to stymie mankind into labouring its queasy and mortifying muddy path. They were western educated man and woman drawn from the Christian and the Islamic faiths respectively. The host, Berla Mundi, enquired from them if a Christian can marry a Muslim, and a vice versa.

Using verses upon verses from their adopted religious books, they all came to conclusion that, "it's a hell impossible for such two opposing faiths to intermarry".

After suffering my ears to listening to them, I concluded that: "these are the axis of folly of religiosity who have caused for our continuous marking of time in our progressive march as Africans".

Who a good God would encourage divisiveness than unity for purpose?

Are these guys different from the radical austere fanatic religious adherents in northern Nigeria, Boko Haram, the Joseph Kony's Lord's Resistance Army in Uganda, and the Al-Shabab militants in Somalia?

If yes, for the reason being that the Ghanaians who preach the despicable isms and schisms are not up in arms to promote their divisiveness agenda, readers should be reminded that all insurgents, including the founding father of Boko Haram, Muhammad Yussif, started as innocuous preacher who sought to place morality above indulgence and self gratification. But in the end, it's ammunition we see them use to forward their jihadism agendum.

Is Ghana ready for that nonsense? Let's think and act fast.

If marriage, as now the adherents of the New World Order explains it, is the union between two consenting adults, and here in Ghana we mean a man and a woman union, why should two lovers be crossed by pedestrian caveats as: "imagine you don't eat pork and that's your husband's delicacy? For this reason you can't intermarry on religious grounds". Foolishness at its highest peak, unapologetically. Is the worshipping of a God, undergirded by love for mankind replaced with glamorising foodie and self gratification? Did the Christ of the Bible preach a love of food ahead of the agape love for a fellow mankind created in the image of God? Or did the Islam Muhammad say to inhabitants of Mecca and Madina to choose whom they would love in likeness of the food they would eat?

Thanks be to God, and the still living souls of our forebears in some of our African leaders today who are counted amongst the ones "you can't fool all the time", they're few good examples to look up to.

The ones who don't see a fellow mankind as lesser than a God, but a God living in a man walking with men.

The vice president of Ghana, Dr. Mahamoud Bawumia, is a Muslim, but he's accepted the marriage to be the political consort, a second man to president Akuffo Addo, a Christian.

In Nigeria, we see a Muslim, Muhamadu Buhari, having his vice president from the Christian denomination.

Last year, the head of the Islamic community in Ghana, the chief Imam, Dr. Nuhu Sharaboutu, congregated with the Catholic church, he is wise, the folly of religiosity is not blinding his knowledge of the ideal path of unity for progress. But amongst his circle, the axis of religious follies spoke in the media, as it's in the lizard that spoils its nice looking white faeces with black at the end, to take shine out of the international commendation the centenarian chief imam got worldwide for sharing a religious space with the Christians. They, with myopic understanding of the religious books they read, spoke against the noble moves of the Chief Imam, claiming it's a sacrilege to the Islamic faith for such a leader to mingle with Christians. He the Chief Imam, as it's in Dr. Bawumia and other few people in Ghana and Africa have seen the light. And they stand up for their rights. The rights which is not stolen by follies of religiosity that seeks to break than to mend, that kills than grow, that drains than fill, and that which calls the so called "unbeliever" an anathema and contemptible than drawing parity for cohabitation.

If those leaders have had intermarriages in their faiths, and are leading their countries, is it not only an unteachable foolish religious conservatives that would promote divisiveness when the world now more needs unity for development?

Another angle is seen in the same denominations who preach divisiveness amongst themselves, being they of Christian or Muslim. Seemingly, evangelicals and orthodoxes are at odds in the Christan faith. The Sunni and the Shiites see themselves as opposing faiths in the Islamic religion. Another nonsense.

You follow it in the news today. A priestess, "commanded by her God", caused for the lynching of a ninety year old woman in Kafaba, northern Ghana. Her crime, "she's a witch who thwarts the progress of the youths". The many youths who are only after quick money but frowns on training and hardworking that enriches the serious minds.

In the central region, the birth place of Ghana's education, where we thought people would act with their heads, there's a report of a woman who following the commandment of her pastor had beaten to pulp his thirteen year old son whom the so called pastor accused of being a witch, the cause of woes for the foolish mother.

If there was to be more space to fill the foolishness religiosity is fomenting in Africa, the reader would be more angrier than I am now. Let's make do with these few, and arm ourselves knowledgeably to combat these religious nonsense.

You can't fool people all the time. The follies of religiosity should be buried today, it has no place in our forward march to the promised land.

From whence came the Bible and the Qur'an, they're not fighting religious wars as we the recipients here are fooling ourselves with here in Africa. Our common enemies are illiteracy, hunger, poverty, exploitation and hopelessness for the teeming youths. Religion should help stemming these ills, not complicating it.

I saw it coming – Ben Ephson on Koku Anyidoho’s expulsion fr...
10 minutes ago

When Joseph's brothers sold him into slavery; they didn't kn...
11 minutes ago