Solidarity; a Game-Changer in the face of a Pandemic 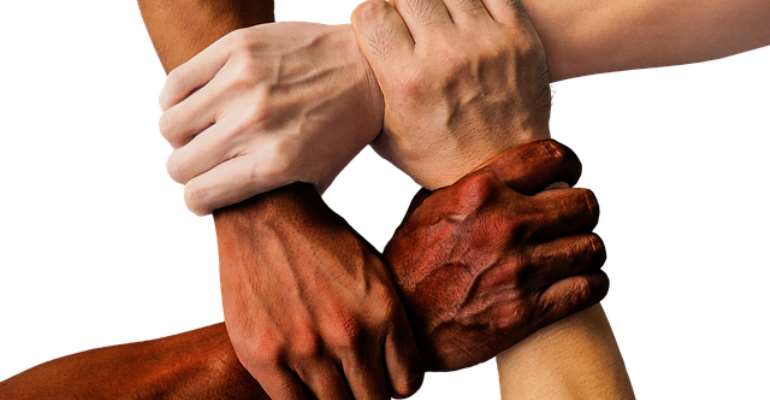 "One of the challenges of our time, without being pietistic or moralistic is to re-instil in the consciousness of our people that sense of human solidarity, of being in the world for one another and because of and through others."- Nelson Mandela

Today, the world continues to face the battle of survival against the deadly COVID-19 outbreak but it seems like we are battling with another pandemic called lack of solidarity. According to WHO, on 31st December 2019 there was an outbreak of a ‘viral pneumonia’ in Wuhan which led to the lockdown of China and many countries across the globe. Currently, COVID-19 has affected 215 countries with over 16 million infected cases, about 10 million recoveries and 657,987 deaths globally.

This, therefore, shows the extreme damage this virus continues to ravage the world. As COVID-19 keeps wrecking our world from various sectors of humanity including economic, social, culture, diplomacy and politics, the real foundations of human solidarity continue to be tested. In the beginning of March, the quick spread of the virus across the globe, generated worldwide panic and anxiety.

And in eradicating this anxiety, another pandemic of ‘lack of solidarity’ has been created as some world superpowers stick to blame games against each other, racism, xenophobia and stigmatization.

According to Merriam-Webster dictionary, solidarity is defined as “unity (as of a group or class) that produces or is based on community of interests, objectives, and standards.” The unity of the world in fighting against the pandemic looks farfetched as some leaders continue to make critical decisions which escalate the effects than the solutions. Unfortunately, US President Donald Trump recently announced that America will no longer be part of World Health Organization based on an accusation that WHO is acting under China’s control. A move many believe will hurt the efforts of WHO because US is the organization’s largest donor, which provided over $400 million in 2019, that makes up almost 15% of their entire budget.

Even before the COVID-19 emerged, there existed a trade war between China and US but it seems the outbreak of the pandemic has escalated the situation. After downplaying the severity of coronavirus in January since it was declared ‘Public Emergency’ by WHO, President Trump blamed China and the global health agency for failing to contain the outbreak. In rebuttal to US accusations, Lijian Zhao, spokesperson of China’s Foreign Ministry alleged on twitter that the US military brought COVID-19 to China during the World Military games in October, 2019.

These and many more blame games have been played by the World’s leading economic powers, which is hampering solidarity efforts in the pandemic response. As the world fights against a common enemy, COVID-19, society continues to focus on our differences rather than similarities. Within the first half of 2020, there have been racial abuse cases related to the pandemic against Asians and Africans across the globe. In Australia, two Asians were attacked in Melbourne as they tried to enter a supermarket and a home owned by an Asian couple was marred with abusive messages in Sydney on the premise of COVID-19. With the increase in racial abuses during the outbreak of the pandemic, patients rejected treatment from Asian doctors in UK.

In Guangzhou, a city in China, black people faced eviction from their rooms as the pandemic was ongoing. In France, during a TV debate, two French doctors suggested that trials of a COVID-19 vaccine should be done in Africa. In another barbaric incident, Jonathan Mok a Singaporean student suffered a xenophobic attack in London which left his left eye bruised. In his personal account of the incident, Mok claimed that one of his perpetrators said that “I don’t want your coronavirus in my country.” It was also unfortunate for Donald Trump, US President and Mike Pompeo, United States Secretary of State to often claim in their press briefings that the pandemic is known as ‘Chinese virus’. COVID-19 survivors have also had their fair share of the new wave of ‘lack of solidarity’ pandemic in the form of stigmatization and discrimination. In Ghana, Fred Drah, who recovered from COVID-19 narrated how together with his family are discriminated and stigmatized because of the pandemic. Increasingly, health workers at the forefront of the pandemic battle have also been stigmatized in many instances.

For instance, according to media reports health personnel in countries like Mexico, Malawi and India were denied access to public transport as well as some were evicted from rented apartments. COVID-19 outbreak has shown our weakness as a united global village. The pandemic has no affiliation with any country, colour or race, profession, age group and ethnicity but what the virus attacks are humanity. Blame games by leaders, racism, xenophobia, discrimination and stigmatization are toxic ingredients which won’t help in defeating this pandemic. Unfortunately, the world has seen too much hate than solidarity in our fight against the pandemic.

Humanity can’t allow this pandemic to keep tearing us apart. We have a generation to save; a world to protect; a story to tell tomorrow and posterity to judge us. We can only overcome crisis with solidarity. Let us unite to rise above our imperfections to achieve a common goal. As Dr Tedros Ghebreyesus, Director-General of the World Health Organization rightly puts it that, the world should “Fight, unite, ignite” in solidarity against the virus.