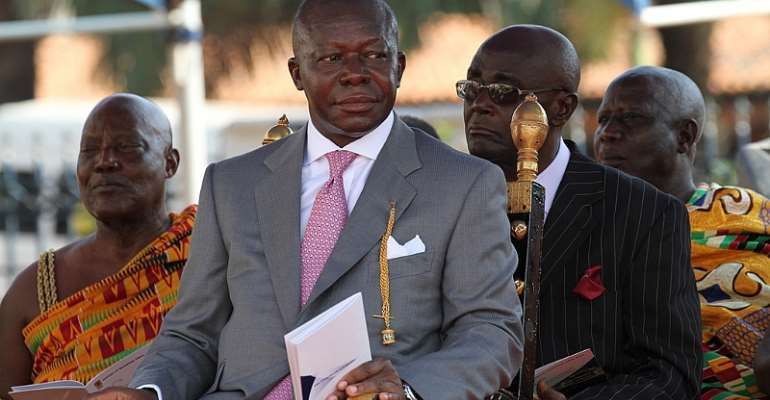 The Chancellor of the Kwame Nkrumah University of Science and Technology (KNUST), Asantehene Otumfuo Osei Tutu II, has called on government to complete the KNUST Teaching Hospital project which started 12 years ago.

Speaking at the investiture of Prof. Rita Akosua Dickson as the new vice-chancellor of the University, where President Akufo-Addo was present, the Asantehene made reference to letters that he had written to the Presidency and urged him to help ensure work resumes on the project.

“The KNUST teaching hospital project which will facilitate the training of health professionals for the country has been under construction for 12 years and appears to be abandoned due to lack of funds. I have written a series of letters to the Ministry of Finance and to the office of his excellency the president but it appears no action has since been taken. KNUST has been very instrumental in the development of the country's health systems and the completion of this facility will go a long way to contribute to the sustenance of such support,” the Asantehene said.

In response, President Akufo-Addo assured that the project will be completed soon.

He said the tenure of the new Vice-Chancellor “will be marked by the construction of the teaching hospital which is so dear to your heart and that of the Otumfuor Osei Tutu.”

The 800-bed capacity hospital was expected to be one of the leading medical training and healthcare facility in the country, has been abandoned for more than a decade.

The project, which was being executed by the College of Architecture and Planning of KNUST, with funding from the University in collaboration with the Ghana Education Trust (GETFund), at the cost of about $125 million, was expected to be completed in 6 years.

Covering a land area of some 71 acres, it was to among others things have a cardiothoracic and neurosurgical centre, diagnostic unit and laboratory, morgue, administration and Out-Patient-Department (OPD) block, wards, security post, effluent chambers as well as a laundry unit.

President John Mahama in 2016 gave an assurance that he will seek funding to complete the project which had at the time stalled due to lack of funding.

Currently, the superstructure of the project is only partly completed.