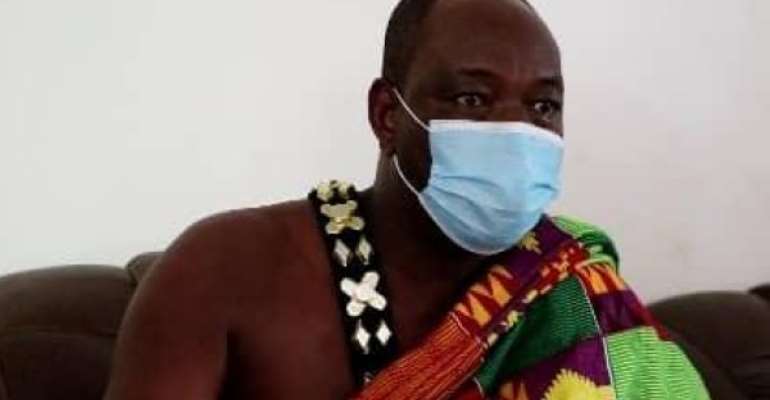 Torgbiga Adamah III, Makorsor of Somey has lamented that the concept of 'chief fisherman' was undermining the traditional chieftaincy institution.

He appeals to the Ministry of Fisheries and Aquaculture Development (MoFAD) to consider scrapping it.

Torgbiga Adamah III deemed the concept of enstooling chiefs for a section of the working public as disturbing and said there was the tendency of these chief fishermen arrogating powers that were not backed by law to themselves.

He said seeing themselves as equals to traditional authorities because “there's hardly re-election for new people making their (chief fishermen) reign limitless.”

Torgbiga Adamah made the appeal, when Rev Johnson Avuletey, Deputy Volta Regional Minister and Mr Elliot Edem Agbenorwu, Municipal Chief Executive for Ketu South led a delegation from MoFAD to pay a courtesy call on him at Agbozume.

The visit saw the sector Minister inform the Chief of the distribution of subsidised outboard motors to beneficiaries in the traditional area as part of the President's Fishing Input Support Scheme for fishers.

It also discussed Illegal Unreported and Unregulated (IUU) fishing practices that threatened the sustainability of the fishing industry.

The Makorsor of Somey said issues of IUU fishing practices were still prevailing despite all the efforts at ending them because the chief fishermen who was to regulate the activities of their fellow fishers at the various landing beaches “are themselves interested parties in the trade.”

He said illegal fishing could be a thing of the past as well as misunderstandings surrounding management and sale of premix fuel to fishers, if traditional leaders were involved, but “chiefs don't have a say in activities, when it comes to fishers, because they already have their chiefs who are the chief fishermen.”

Mrs Elizabeth Afoley Quaye, Minister, Fisheries and Aquaculture Development doubted if the Ministry instituted the chief fisherman concept to warrant any attempt to scrap it and noted that Torgbuiga's appeal would be considered nonetheless.

She said government would soon launch a collaborative fishing management policy, which would have all key stakeholders in fishing communities including; chiefs working together to safeguard the fishing industry.

On premix, the Minister said committees were formed at the various landing beaches to empower fishermen to run the premix fuel stations and use proceeds from sales of the fuel to develop the fishing communities.

She urged the committees to seek the consent of District Chief Executives and traditional leaders in those communities before carrying out projects.