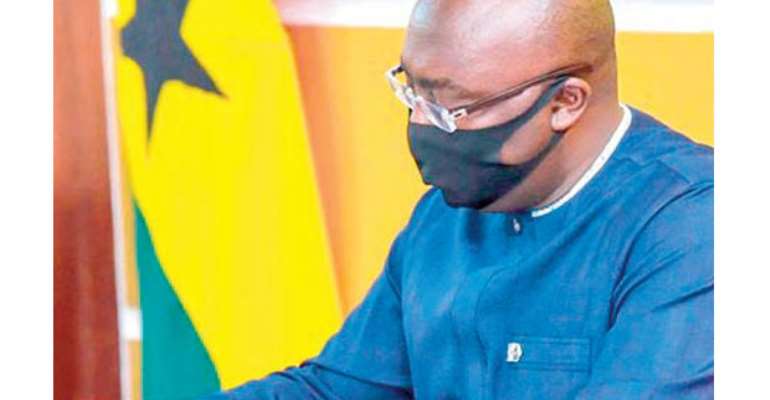 Vice-President Dr. Mahamudu Bawumia has announced the construction of model senior high schools (SHSs) in Muslim-dominated settlements, popularly called Zongos, in each of the 16 regions to cater for the education of the youth.

He made the announcement yesterday in his speech during this year's Eid Ul Adha prayers presided over by the National Chief Imam, Sheikh Osman Nuhu Sharubutu, at the inner reception of the Ghana Broadcasting Corporation (GBC) under Covid-19 restrictions.

He assured people of the segment of the country that President Akufo-Addo is committed to their welfare and development, especially in the area of infrastructure and education.

The 16 model schools, he added, would be constructed, as he put it, in the next term of President Akufo-Addo, God willing.

“President Akufo-Addo is more committed to uplifting education in Zongo communities. As a result, he has decided that inshaa Allah, his next government will build 16 model secondary schools in Zongo communities in each of the 16 regions,” Dr. Bawumia stressed.

“This will be a special senior high school, which will focus on educating children within Zongo communities,” he added.

The Vice-President indicated that an inclusive nation is being built through pragmatic social intervention policies introduced by President Akufo-Addo, saying “nobody is being left out.”

Social intervention programmes, such as the Free SHS, One Village One Dam, One District One Factory, Zongo Development Fund, One Constituency One Million Dollars, Planting for Food and Jobs, among others, are designed to carry along the poor and deprived members of society, who largely live in rural areas, Zongos and inner cities, according to Dr. Bawumia.

“Building an inclusive society requires pragmatic government policies to ensure everyone is covered. This has been the focus of the Akufo-Addo government, and this thinking is evidently clear in broader social intervention policies of our government,” he explained.

“The poor and deprived in Ghana largely live in rural, inner city and zongo communities, and have historically been excluded in many aspects of governance and access to opportunities and government services in this country,” he added.

The Vice-President said when they assumed office three and half years ago, they identified that apart from limited opportunities to access education due to cost and underdevelopment, the poor, deprived, rural, inner city and Zongo dwellers generally faced a number of common problems such as poor identity documentation, poor residential addresses, lack of TIN numbers and bank accounts, no ambulances, unemployment, whom you know syndrome, etc., which entrenched their exclusion from many aspects of governance.

The Vice-President observed that the outbreak of Covid-19 has further exposed the difficulties of the less privileged in society, thereby reinforcing the Akufo-Addo government's belief and determination to build an inclusive society, which cares for the poor and deprived in the country.

“This is the reason why apart from government's sustained efforts at curbing the spread of the virus, it has also made it a topmost priority to alleviate the effects of the pandemic on businesses and Ghanaians, especially the poor and the less privileged,” he pointed out.

“Since the outbreak of the pandemic in March, government has taken bold steps such as the distribution of hot meals and water to the less privileged during the lockdown, free electricity to lifeline consumers and 50% reduction for others, 100% subsidy on water bill, GH¢600 million stimulus package to small enterprises,” he said.

Sheikh Osman Nuhu Sharubutu, who led the prayers which was broadcast live on television, prayed for Ghana, the President and his Vice, as well as the people.

Present were the Saudi Ambassador to Ghana, Second Lady, Business Development Minister Dr. Mohammed Awal, representations from Islamic organizations such as the Coalition of Muslims Organizations, Federation of Muslim Women Associations of Ghana, Council of Zongo Chiefs, among others.