By Andrea Bernardi with Ella Ide and Alexandria Sage in Rome 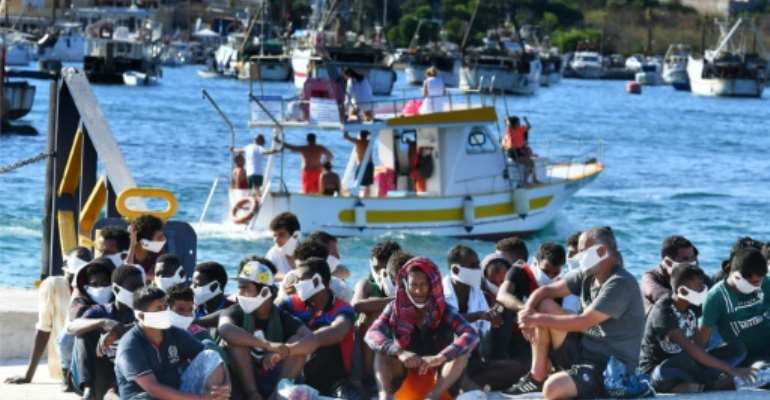 Most of the recent arrivals hail from Tunisia, a country battling high unemployment and political instability. By Alberto PIZZOLI (AFP)

Out in the Mediterranean, under a baking sun, fisherman Ezio Billeci comes across a boat of vulnerable migrants and calls for help, but for hours the only response he gets from Italian authorities is to "stand by".

The episode off the island of Lampedusa symbolises what critics say is the government's lax response to managing migration in a period exacerbated by the coronavirus pandemic -- accusations led by the anti-immigrant far-right.

Most of the recent arrivals hail from Tunisia, a country battling high unemployment and political instability. But Italy has its own financial woes -- figures released Friday showed it plunged deep into recession -- prompting resentment towards so-called economic migrants.

Several episodes in recent days of breakouts from overcrowded reception centres have also sparked fears among local populations that the migrants who did not respect quarantine orders could be spreading the virus throughout Italy.

Exasperated local mayors have appealed for help from the government, which has in some cases sent in army back-up.

Far-right rising star Giorgia Meloni, head of the Brothers of Italy party, accused the centre-left ruling coalition this week of having used draconian measures this spring to ensure Italians respected the coronavirus lockdown, but was now letting migrants roam free.

"You have the nerve to chase people on the beach with drones, and now you allow thousands of illegal immigrants to enter Italy, transgress our borders and violate quarantine, wandering around infected," she said in an angry address to parliament.

Many of the small boats carrying Tunisians to Italy land on the tiny island of Lampedusa. Its ex-mayor Giusi Nicolini, who won the UNESCO Peace Prize in early 2017 for her efforts with migrants, has insisted there "is no emergency".

The interior ministry has said the army would guard reception centres to prevent migrants from escaping mandatory quarantine. By Alberto PIZZOLI (AFP)

"They say we are overrun (with migrants) for political purposes," she said in an interview this week with La Stampa daily.

A widely-circulated photograph of a Tunisian family with straw sunhats and trolley suitcases arriving by boat with their pet poodle fuelled the far-right, as did a video of beach-going tourists watching as new migrants disembarked on nearby rocks.

"The illegal immigrants are arriving in droves, even with poodles who've clearly escaped from Libyan camps," quipped opposition chief Matteo Salvini, head of the anti-immigrant League, Italy's most popular party.

On Thursday, Lampedusa's local League representative, along with the centre-right Forza Italia party, filed a complaint against Interior Minister Luciana Lamorgese, accusing her of destroying nascent tourism on the island.

According to Italy's interior ministry, nearly half of the 11,191 migrants who have arrived in Italy this year through July 24 have set sail from Tunisia. Of them, nearly 4,000 are Tunisian citizens.

Over 2,000 migrants arrived last week alone, according to the UN Refugee Agency -- more than double the previous week.

'Look the other way'

The interior ministry has acknowledged that the economic crisis caused by COVID-19 in Tunisia has fed an "exceptional flow of economic migrants" to Italy's borders, while the virus has made managing numerous daily arrivals more complex.

Over 2,000 migrants arrived last week alone, according to the UN Refugee Agency -- more than double the previous week. By Alberto PIZZOLI (AFP)

After specifically singling out Tunisians escaping mandatory quarantine, Lamorgese said Wednesday that the army would guard reception centres, while two ships of 600 places each would be available soon to hold migrants during quarantine.

Prime Minister Giuseppe Conte has remained silent about the recent arrivals, reflecting tensions within the party over how to respond, given that Salvini famously built his voter base on an anti-immigrant policy that the left has failed to counter.

Salvini, who faces trial later this year for allegedly illegally detaining migrants by refusing to let them disembark from a rescue ship, insists that charity ships and others who save migrants at sea encourage more people to attempt the dangerous journey.

Fishermen who come across migrant boats -- whether from Tunisia or Libya -- beyond 12 nautical miles from Italy's coasts "are supposed to look the other way", and leave them there, even if they have run out of petrol and water, Billeci told AFP.