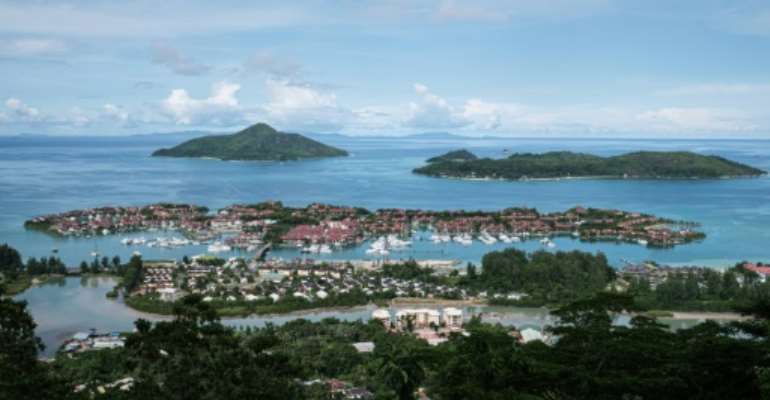 The archipelago of 115 islands, which relies heavily on tourism, has been hit hard by the pandemic. By Yasuyoshi CHIBA (AFP/File)

Legislative elections in Seychelles will be held early alongside October's presidential polls in order to save public money, as the island nation's economy is hit hard by the coronavirus pandemic, President Danny Faure has said.

The Seychelles has recorded only 114 cases of COVID-19, with no fatalities, but the impact on global tourism has weighed heavily on the Indian Ocean archipelago considered a paradise for luxury travel.

The government banned cruise ships and shut its international airport after the first cases were announced in March. The country is due to reopen to commercial flights on Saturday.

The pandemic is expected to result in a 14 percent drop in gross domestic product, according to an estimate released by the country's finance ministry.

As a result legislative elections, scheduled for next year, will now be held at the same time as the presidential vote, Faure said in a televised address on Thursday.

Due to "economic problems we will have to face and to reduce spending, I have decided that it is better to do these two elections together," Faure said, adding that it was "in the interest of the country".

The country's election commission has set tentative dates for the presidential election from October 22 to October 24.

It marks the first time since 1998 that the two elections will be held in the same year.

Faure announced in May that he would seek re-election in presidential polls.

The 58-year-old took office in 2016 after his predecessor quit following a crushing defeat in legislative elections for the party which had been in power for four decades.

The victory for the Linyon Demokratik Seselwa (Seychelles Democratic Union in Creole) was the first time since the country's return to multiparty politics in 1993 that the opposition had obtained a majority in parliament.

The ruling Parti Lepep, known as the People's Party locally, hopes to take advantage of divisions within the opposition coalition in the next elections to regain control of the National Assembly.

To make up for the loss of tourism revenues, Seychelles has turned towards its second-largest sector fishing, by accepting the rotation of international teams on its soil, to obtain foreign currency.

The archipelago of 115 islands welcomed more than 360,000 visitors in 2018, twice as many as ten years ago and almost four times its population.