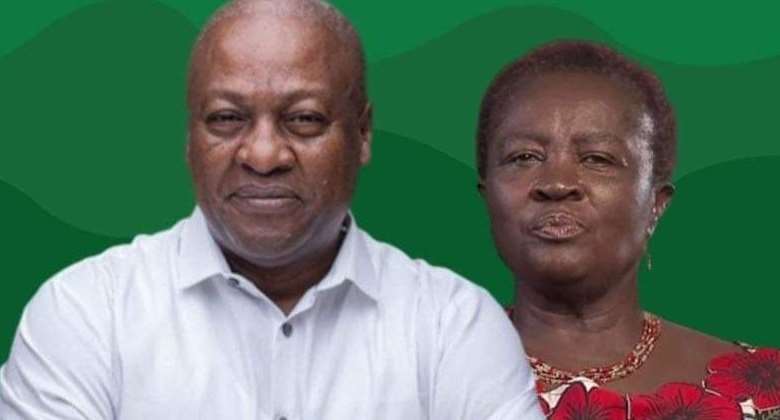 He is a man without a message, so former President John Dramani Mahama has been running around the country promising to provide social intervention policy initiatives and healthcare incentives that already exist in the country, the latter of which were first introduced into the country by former President John Agyekum-Kufuor and the New Patriotic Party (NPP), when Mr. Kufuor governed the country from January 2001 to January 2009. Clearly, Candidate Mahama is a complete stranger in his own country (See “What’s Mahama Talking About? NHIS Already Offers Free Primary Healthcare – Nsiah-Asare” Modernghana.com 7/30/20).

This is what those of us who have described the man as a pathological liar and a megalomaniac also mean when we describe Candidate John Dramani Mahama as a grossly incompetent former President and a has been, who still adamantly insists on being afforded another highly unlikely chance to totally destroy our beloved and only Sovereign Democratic Republic of Ghana. We are informed that while “outdooring” his 2020 Presidential Running-Mate and former Education Minister, Prof. Jane Naana Opoku-Agyemang, recently, Candidate Mahama had the temerity to glibly insult the intelligence of the Ghanaian citizenry and the electorate by promising to provide us with primary healthcare which, by the way, already exists in the country and has existed in the country for more than a decade.

So maybe, even as Nana Akufo-Addo’s Health Advisor, Dr. Anthony Nsiah-Asare, suggestively riposted recently, somebody needs to explain to this power-drunken political missionary without any missionary agenda, besides the raw grab for power, that “primary healthcare” involves the comprehensive provision of such services as “immunization, ante-natal care, malaria treatment, diabetes, respiratory tract infections and the treatment of hypertension and annual general medical checkup.” Indeed, I have often said that the National Democratic Congress (NDC) needs to more realistically redefine its ideological and political orientation because it is the New Patriotic Party, rather erroneously described as a Center-Right political establishment, that is social-democratically oriented.

The National Democratic Congress’ leaders are veritable kleptocratic sharks in blind pursuit of Social Darwinism or the barbarous ideology of The Survival of The Fittest. We all saw and felt the brutal brunt of this patent policy savagery reflected in their pre-Agyekum-Kufuor Cash-and-Carry healthcare policy, in which those who could not afford payment for the treatment of their ailments were literally left to waste away and die in their homes and on our streets. At any rate, those of us avid observers of the Fourth Republican Ghanaian political landscape were not the least bit surprised to hear Candidate Mahama scandalously confuse primary healthcare with specialized healthcare which, by the way, Dr. Nsiah-Asare, the former Akufo-Addo-appointed Director-General of Ghana Medical Services, also tells us exists under the Agyekum-Kufuor-implemented National Health Insurance Scheme, a fee-free healthcare policy initiative which both former Presidents John Evans Atta-Mills, late, and John Dramani Mahama vehemently pooh-poohed and called a veritable “pipe-dream.”

Candidate Mahama’s at once scandalous and inexcusable ignorance of what constitutes “primary healthcare” is none the least bit surprising because the man is totally out of touch with the reality of the existence of the proverbial average Ghanaian citizen, what with his Arab-married adult children, such as Shafik Mahama, the self-exiled United Arab Emirates resident, spending lavishly on conjugal festivities in the Tinseltown City of Dubai with the full orgiastic blessing of Daddy Kwame Dubai. You see, having effectively bankrupted our National Health Insurance Scheme, one does not expect this happy-go-lucky sexagenarian nation-wrecking King-of-Dumsor to know what socially responsible statesmen and women mean, when they talk of “primary healthcare” or “social democracy,” or even the “welfare state.”