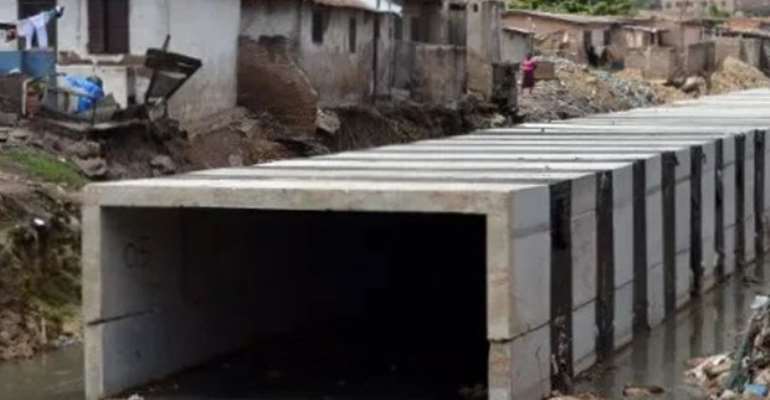 State of the Nima drainage

Parliament has approved a loan facility agreement of €101,760,002.01 between the government and the Standard Chartered Bank, London, to finance the design and construction of drainage and ancillary sewage system of Nima drain from Kawukudi to the Odaw River Basin.

The construction, when completed, would nip in the bud the perennial floods mostly resulting in the loss of lives, livelihoods and properties and disruption of economic activities with its consequent financial loss to the country.

The Nima drain takes its source from the western part of the airport and runs through the Airport city, Centre for Scientific and Industrial Research (CSIR), Mamobi, Nima, Asylum Down, Circle and finally discharges into the Odaw stream at Circle near the Hawkers' Market.

The stretch through Mamobi, a low income and heavily populated community was improved through a storm water project in the community, involving the construction of a 1.2km rectangular box drain measuring 5.0m wide by 2.5m deep and stretches from the Kanda highway close to the Kawukudi junction to the culvert on the Nima road.

The agreement was presented to the House on June 23, 2020 by the Deputy Minister for Finance, Abena Osei Asare, on behalf of the Minister of Finance and referred to the Finance Committee for consideration and report.

The Mamobi community has, for many years, been experiencing perennial floods, mostly resulting in the loss of lives, livelihoods and properties and disruption of economic activities with its consequent financial loss to the state.

Unfortunately, waste management in the community was very poor and the bulk of the waste generated from the community ended up in the Nima stream.

The channel banks in the community are degraded due to bank erosion and most building structures along the banks have collapsed into the drain.

The project covers works to be undertaken on the already existing Nima drain in the Accra Metropolitan Area, which include rehabilitation and enhancement of Nima drain PH.2 (3300M) from Nima road to Odaw River.

This is a major intervention which would be integrated with the city of Accra through a holistic resolution of pressure and problem zones together with the generation of city space elements—backfilling the side banks on phase one (stretch between Obasanjo highway and Mamobi highway) and construction of a rectangular (closed) section between Obosanjo highway and Mamobi highway.

There would also be the construction of a rectangular (closed) section on the stretch between Mamobi highway and Kojo Thompson Avenue, which comprises the necessary works for the foundation of the enhanced area over the new closed drain; and modification of the existing output of the Nima drain into the Odaw River rotating it to a 45° angle output.