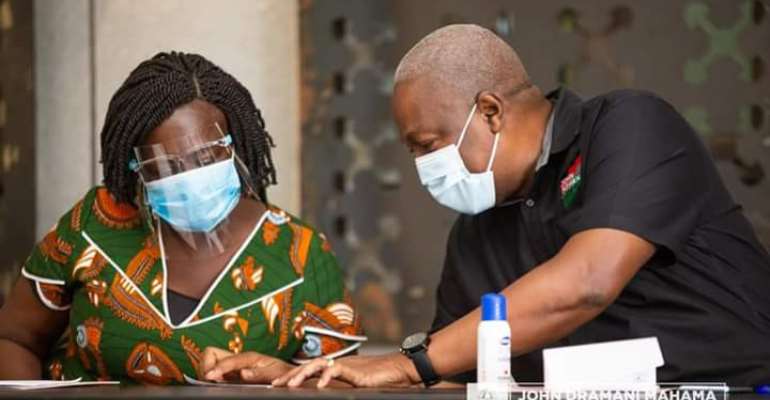 Fellow Ghanaians, "I don't know who invented the high-heels", said Marilyn Monroe "but all women owe him a lot".

All girls and women of our dear country owe former President Mahama a lot for respecting their "high heels" and giving it a place in the Flag Staff House. And their indebtedness to the former President must be translated into votes for him and one of their own, Professor Jane Naana Opoku Agyemang in the upcoming December election.

Wait a minute. If according to the Holy Scriptures both the man and the woman were created to assist each other in their existence on the surface of the earth, then this is the period we have gotten the leadership of our country right as religious people.

For me, I believe Ghana's example must be replicated across the world such that, it would now become a law to always have gender-balanced leadership, at least, with the woman deputizing in the highest office of every jurisdiction in the world.

For far too long, disturbing misogynistic statements have been used to demonize women, and attempts have always been made to belittle their achievements any time they challenge men, who have spectacularly failed the world.

I personally often wonder ponderously, if there was at most fifty percent of women world leaders in the last century, would both First and Second World Wars have been fought?

I wonder, whether over twenty (20) million people would have perished in the First World? And whether sixty (60) million lives would have been lost in the 2nd World War?

It's very obvious that men in leadership positions have often lose their patriarchal control with a little inflation of their egos by women, leading to abuse of office and atrocities on a scale larger than their testosterone.

The question is, who do men steal for? Who do they kill for, and who do they take the bullet for? The answer is very loud and clear: the woman!

Evil exists because of men's desperation to win the woman's attention! Why not bring her closer to him, not only in bed but in governance processes?

Isn't it stupidity repeating the same thing and expecting different results every time?

Fellow Ghanaians, according to Chanakya (c. 370-283 BCE), there are three germs upon this earth; food, water, and PLEASING WORDS --- fools consider pieces of rocks as germs."

The politically calming and soothing speech Her Excellency in the making, Prof. Jane - In Shaa Allah - delivered during her out dooring was nothing more than a political drive-by shooting to the New Patriotic Party government that has become an infuriating joke, a silo of gangsterism and a huge home for official financial criminals, a scumbag politicians, and a collection of misogynists!

Professor Jane Naana Opoku Agyemang is more than a hope and inspiration to this country's women and men, she is a symbol of optimistic meritocracy as a professor; She is a God-sent.

Listening to her deliver her "out-dooring" speech as a vice president in waiting, I felt like sewing "Hijab" and losing this troublesome "Sausage" of mine in between my legs as a young man. I noticed I instantly became jealous of women in this country. That is the second time I have wished to become a woman.

The first time I had harbored that wish was my childhood days with my uncle in a farming community of Kusheli in the Mion Constituency. Not because I was proud of women at the time but because they never engaged in the vigorous activities of farming.

At around five o'clock AM I was always ready to set of to our farm which was farthest than the rest of the farms in the community to chase birds from exhuming recently sowed seedlings. My uncle would later join me around 7am and we would weed till around five o'clock PM in the evening. It was very tedious and I had often feigned sicknesses to escape certain stubborn and dangerous weeds.

But the women only used to come to the farm at their own behest. Often, they brought our food or came to get some vegetables for cooking, and left us in that pythons festered jungle immediately they were done.

I was quite young then and didn't know that once you were born with these two "balls and a rod" in between your thighs as a baby boy, it is practically impossible in our clime to get it changed and replaced with that of the woman's "envy of humanity" between her thighs. So, every time I made prostration to God during my night prayers I pestered Him to command my "balls" to disappear and allow "what all women have" to appear between my thighs instead. I wanted to become a woman, at least a girl at the time to dodge farming activities.

And I had always childishly inspected my private part every morning to check whether my prayer was accepted or not so that I could also go to the farm at a will like the women. But to my bitterest disappointment always after every night prayer vigil, the "early morning dick or wood" as we slang the nocturnal penile tumescence in medical terminologies exposed me that my prayer was not accepted by God to escape farming! And over time I finally began enjoying the Adam's profession.

However, Professor Jane's motherly but very intellectual, inspirational, and spirit lifting speech made me jealous of our mothers once again. Even though this time around not to escape the difficulty in farming, but to embrace the beauty of the "high heels" that's about to grace the seat of government come January 7, 2021. In Shaa Allah.

You see, he who opens a school door, according to Victor Hugo, closes a prison.

The selection of Prof. Jane as an academic with her swashbuckling pen and towering intelligent quotient to be the running mate of President John Mahama, is not only restoration of hope to the NDC as a party, but she is a hope, a Savior, and a mercy all rolled into one, to the whole of Ghanaians!

She has come to put an end to our endless political bloodbath and perpetual bereavement of economic quagmire, as a Mother, since Akufo Addo came into office.

Clearly, president Akufo Addo and his cousins' government care a little about Ghanaians. Theirs is to recoup and replenish what had been depleted and lost - on the back of Ghanaians - in their pursuit and quest for political power for eight years in opposition during the 2008 and 2012 general elections, having had the mandate of Ghanaians to govern.

That explains why they have literally mutilated the country - incurring huge debts, changing names of institutions of state to venerate their corrupt forefathers whose legacy of legendary corruption perpetrated against this country they have inherited and embraced with alacrity to further feather the comforting nests of ill-gotten opulence and corruption, even if they are not more.

It is Albert Einstein who once said that, "any intelligent fool can make things bigger, more complex, and more violent. It takes a touch of genius — and a lot of courage to move in the opposite direction.”

Ghana needs the soft touch of the female palm; Ghana needs to be touched by a genius (Professor); She needs to move in the opposite direction.

Let President Akufo Addo take his knee off the neck of Ghana. Ghana must breath again.

For Prof. Jane, what Ernesto Che Guevara said is what she stands for: "I am not a liberator. Liberators don't exist. The people liberate themselves."

The incoming first female vice president rather put it mildly, "The choice we have in this election is clear: we can either build a Ghana where every citizen regardless of background is afforded equal opportunity to become their best selves. Or we can continue on a path where a few people attempt to control and dictate the destiny of the people who have given them the privilege to govern."

It's why every youth in this country must rise to the frightening crescendo of borrowing by the inept government of President Akufo Addo.

We can't afford to allow few selfish individuals to keep borrowing money on our behalf to be stolen behind our backs for their generations yet unborn. Our dreams must be accomplished and not be quashed decisively by food-is-ready politicians who don't have the foggiest clue on how to create wealth, but to waste it.

After all, G. K. Chesterton was right when he opined that the center of every man's existence is a dream.

Fellow youngsters of the Republic of Ghana, we must not allow political vultures to kill our dreams in the pursuit of their parochial thieving agenda.

The time has come for the HIGH HEEL to be "polished" in the Flag Staff House. The intellectual preparedness and moral gallantry displayed by Professor Jane Naana Opoku Agyemang must be supported with unalloyed electoral loyalty and zeal to the moral conclusion.

Four more years for Akufo Addo means, he would be borrowing at least GH¢10,000 on behalf of you and I to share among his cousins and friends.

So far, Akufo Addo's government has incurred over GH¢6,000 (60 million old cedis) on behalf of you, your younger siblings, your parents, uncles, nephews, whether they are four or forty years old, each.

That is the amazing and chilling incompetence of President Akufo Addo, who has in the last four years debased governance to borrowing to provide "free" electricity.

Fellow Ghanaians, this Lanister-led government has caused us a lot of pain and does not deserve any four more years if only we care for our tomorrow and the tomorrow of our country Ghana.

Tell me my reader, have you received GH¢6000 in your life without having to work for it if you have really made such an amount of money in the last four years in your life?

It’s under this government we have a useless and very insulting ministry like Zongo development ministry, yet the number of Almajiri (beggars) quadrupled in the Zongo communities. Every now then people rise on their feet in Mosques to ask for what to eat from the congregation.

This is the economic management Dr. Bawumia has been trumpeting every time and everywhere, from Accra to Zuarungu, Aflao to Axim.

Let's kick the "goggles" man out of power, he is responsible for our woes.

We have nothing to lose but our future and chains, to paraphrase Karl Marx.

This is the time for an "Adam and Eve" government. After all, in every home there's a husband and a wife.