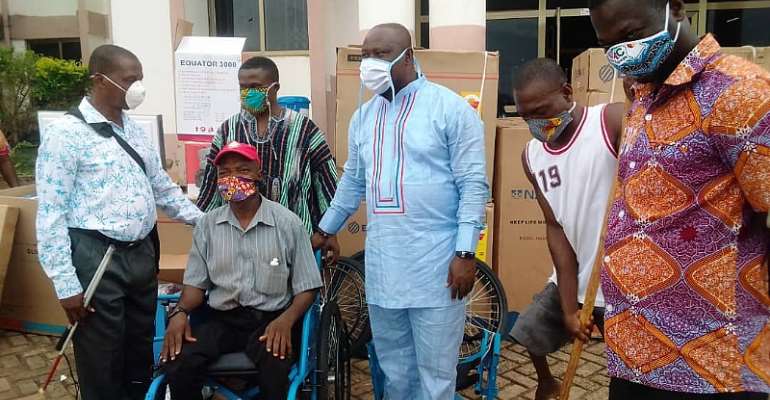 Employable equipment worth over Ghc 37,740.5 has been given to 77 Persons living with Disability in the Prestea Huni-Valley Municipality.

Additionally,an amount of Eleven Thousand Two Hundred Ghana Cedis ( Ghc 11,200) was shared among 14 PWLDs who needed financial support out of which Eight 8 we're males and the remaining six were females.

Addressing the ceremony, the Municipal Chief Executive of the Prestea Huni-Valley Municipal Assembly, Dr. Isaac Dasmani stressed that disability is not inability, adding, persons with Disability in the Municipality have the ability to do something in order to earn a living, in view of this, the assembly in collaboration with the Member of Parliament for the Prestea Huni-Valley Constituency also decided to help them to achieve their aim.

He added that, all the PWLDs were registered and asked to request for anything that will improve their livelihood.

He stated that, 635 out of 159,304 people in the Municipality were people with disabilities according to the 2010 Population and Housing Census, meaning 4 out of 100 people were persons with disability he emphasized.

He observed, the Assembly is planning of opening a Vocational Skill Training Centre for Persons with Disability to equip them with good skilled training which can help improve their standard of living.

Dr.Dasmani hintef, the Assembly is putting measures in place such that, next disbursement will come along with materials and start-up capital.

According to the MCE, the Assembly has discovered that some PWLDs do not use the support for its intended purpose. Hence, giving them a start-up capital in addition to the items will help them acquire basic things needed to supplement what they have already been given.

He advised them to desist from such character but rather use the equipment for the purpose meant for and also take very good care of the equipment in order to prolong its life span.

On behalf of the PWD’s, the Chairman of the Persons with Disability, Patrick Obeng said, thanked the Assembly for supporting them with such equipment, and was of the hope that they will put it into good use to cater for themselves and their family.

He said the Assembly has given a lot of support to Persons with Disability but such support mostly is not made public in the public.

He called on the media to highlight the good work done by the Assembly, and pleaded with beneficiaries to desist from selling the items, adding that anyone found in the act of selling Will be prosecuted together with the buyer.

You can’t dictate to Akufo-Addo; stop the disrespect – Sefwi...
57 minutes ago