Coronavirus in Nigeria: What we know

By Sophie Bouillon and Tunde Agoi in Lagos, with Aminu Abubakar in Kano 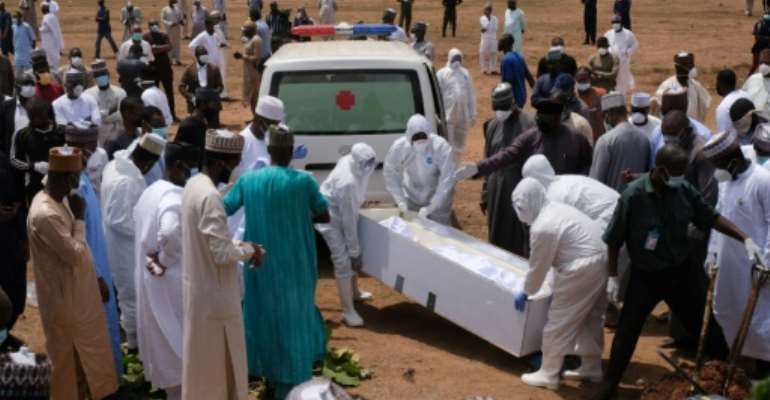 Five months after Nigeria saw its first case of COVID-19, the virus today is spreading at dizzying speed, posing a mountainous challenge to a health service already under strain.

Here's a snapshot of the situation in Africa's most populous country:

Like many countries in Africa, Nigeria imposed a lockdown at the start of the pandemic.

The move helped to brake the spread but at the cost of severe economic damage and was eventually eased.

In this country of 200 million people, the hotspots are the megacities of Lagos, Ibadan and Abuja, each with populations of more than 10 million.

Officially, Nigeria counted some 41,000 cases with 860 deaths as of the end of July.

But such figures do not tell the full story, according to Sani Aliyu, head of the national task force combatting the virus.

"For every one case, there are a handful of cases that we are missing because we are not able to test everybody," he said.

Nigeria carries out only 3,000 tests per day -- about a tenth of the number in South Africa, which has a much smaller population of 58 million.

Nigeria could do more testing, notably as private labs have been given the go-ahead to take part, but basic infrastructure -- roads, clinics and so on -- is a major handicap.

Anecdotal evidence suggests the mortality rate from coronavirus itself is low, although the disease could be indirectly having a fatal impact elsewhere.

Clusters of deaths in the northern city of Kano, where dozens were buried every day in April and May, point to a wider picture of mortality.

Coronavirus testing at the University of Maiduguri Teaching Hospital in northern Nigeria. By Audu MARTE (AFP)

An official investigation attributed around 800 of the deaths to COVID-19, although this was not backed by formal scientific evidence.

A gravedigger in the city told AFP that deaths always spike during the hottest months of April and May.

A doctor there, Safiyanu Ahmad, said the hot season was notorious for measles, meningitis and typhoid.

"We normally see a steep rise in fatalities during that period," Ahmad said.

"But this year COVID-19 was added to the deadly cocktail, which led to unusually high mortality. Some of the deaths could have been from COVID-19, but most of them were indirectly related to the pandemic."

Other respiratory diseases, as well as malaria, cholera and HIV, claim hundreds of thousands of lives in Nigeria each year, but most of the deaths are undocumented.

"The response to COVID has been sometimes at the expense of other diseases, immunisation campaigns," said Abayomi Sule, a health system specialist.

"And fewer people go to hospital now due to fear of infection."

Nigeria's public health sector is weak after years of neglect.

The country has just 35,000 physicians for a population of 200 million, more than 200,000 short of what is needed, according to the World Health Organization (WHO).

Its ratio of doctors to the general public is just 0.3 per thousand. By comparison, France, which is persistently rated as having the best overall health system in the world, has 3.23 doctors per thousand.

Added to low public confidence in the health system is widespread doubt that COVID-19 actually exists in Africa.

A public awareness campaign is needed "to educate and inform the public, using... megaphones mounted on vehicles," said Innocent Ujah, head of the Nigerian Medical Association.

The campaign must "move from village to village, community to community, so that people will accept that COVID-19 is real."

Evidence of problems in the Nigerian health system has multiplied as the pandemic has advances, most visibly in a string of warning strikes by doctors in Lagos over protective kits and demands for hazard allowances.

A huge coronavirus isolation centre was set up at a stadium in Kano in April thanks to help from Aliko Dangote, a locally-born businessman and philanthropist. But experts say lack of doctors is the health system's biggest problem right now. By AMINU ABUBAKAR (AFP)

A number of patients have been turned away from hospitals because healthcare workers, lacking adequate protection, feared they had the virus.

"Everybody is working like three times the rate, and we don't see the end of it," said virologist Adeola Fowotade.

Admissions are not coming in first or second waves, they keep rising relentlessly, he said.

"It's psychologically very hard to handle. Sometimes I wish I could go to sleep and wake up when it's over."

Dr. Folakemi Ezenwanne, a mother of two young children, spent four months in an isolation centre in Lagos and had just returned home for a short break before heading out again.

"It brings a lot of psychological stress," she said, but added: "I'm very passionate about public health. I can't stop working."

‘Sputnik-V procurement contract must be re-examined’ – Kwaku...
4 minutes ago

Getting Sputnik-V vaccines from black market using middlemen...
4 minutes ago