Thousands of migrants dying on trek across Africa: UN 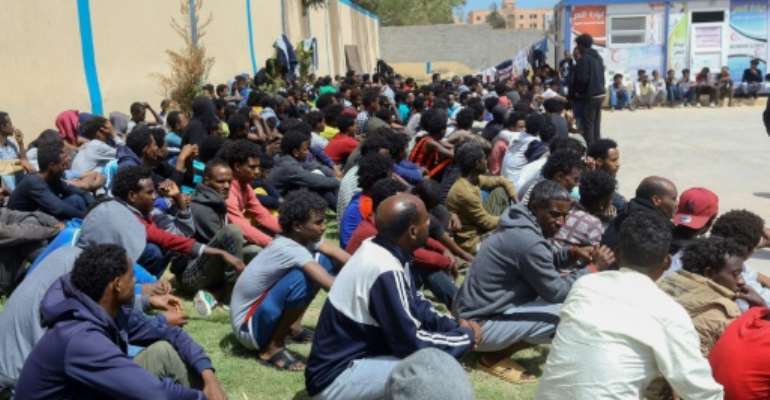 Tens of thousands of refugees and asylum-seekers -- similar to these African migrants who fled Libyan battle zones, pictured April 2019 at at a detention center in Zawiya -- have been stranded in chaos-wracked Libya. By Mahmud TURKIA (AFP/File)

Thousands of migrants have died after suffering "extreme" abuse while crossing Africa, according to a UN report on Wednesday that estimated 72 people perish each month on the continent's routes.

There has been considerable focus on the thousands lost at sea while trying to cross from Africa to Europe, but a new report found that routes from West and East Africa up towards the Mediterranean can be equally perilous.

Entitled "On this journey, no one cares if you live or die", the report published jointly by the UN refugee agency and the Danish Refugee Council's Mixed Migration Centre (MMC) details horrific dangers many face along the way.

Most migrants making such journeys experience or witness "unspeakable brutality and inhumanity" by smugglers, traffickers, militias and sometimes state actors, the UNHCR said.

In 2018 and 2019 alone, at least 1,750 people died, corresponding to an average of 72 a month, "making it one of the most deadly routes for refugees and migrants in the world," the report found.

'Tip of the iceberg'

UNHCR's Special Envoy for the Central Mediterranean Situation, Vincent Cochetel, told reporters that those numbers were considered "a low estimate".

"That's just the visible tip of the iceberg."

"For too long, the harrowing abuses experienced by refugees and migrants along these overland routes have remained largely invisible," UN refugee chief Filippo Grandi said in the statement.

The report, he said, documents "killings and widespread violence of the most brutal nature, perpetrated against desperate people fleeing war, violence and persecution."

Nearly a third of those who die along these overland routes tried to cross the Sahara desert. Others perished in the south of war-ravaged Libya, while another deadly route crosses conflict-ridden Central African Republic and Mali.

Those who survive are often left severely traumatised.

This is particularly true for the many who pass through Libya, where random killings, torture, forced labour and beatings are widespread, the report found.

Tens of thousands of refugees and asylum-seekers, often sub-Saharan African and Asian migrants hoping to make it across the Mediterranean, have been stranded in chaos-wracked Libya, now a key route for illicit migration to Europe.

And many of those who try to cross the Mediterranean are stopped and turned back by the Libyan coastguard.

More than 6,200 refugees were forced to disembark in Libya so far this year alone, the report said, stressing that many are then detained in "appalling conditions".

Women and girls, but also men and boys, face a high risk of rape and other sexual abuse along the various routes, in particular at checkpoints, in border areas and during desert crossings, the report found.

Smugglers were the main perpetrators in North and East Africa, while in West Africa police and security forces were held responsible for a quarter of the reported sexual assaults.

Around a third of those who reported witnessing or surviving sexual violence said it had occurred in more than one location.

"Strong leadership and concerted action are needed by states in the region, with support from the international community, to end these cruelties, protect the victims and prosecute the criminals responsible," Grandi said.

Cochetel lamented that so far such action had been cruelly lacking.

Over the past two years, he pointed out, there has not been a single arrest of a UN-sanctioned trafficker and no new names have been added to the list.

"Why don't we follow the money flows? Why don't we seriously go after those people to combat impunity?" he asked.

"We are tired to write those reports after reports and hear the same complaints from the same victims," he said.