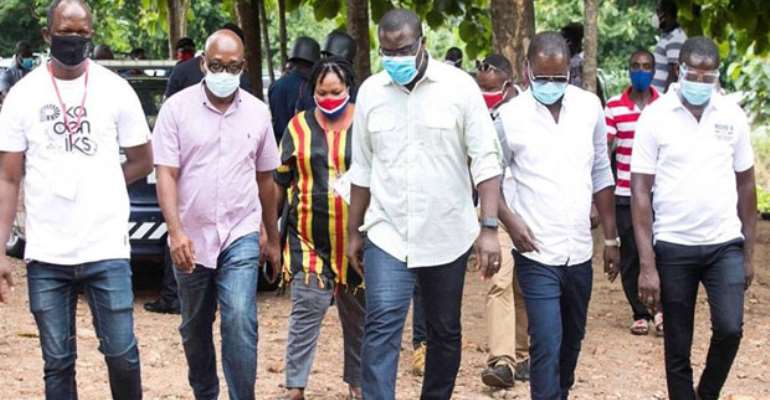 The governing New Patriotic Party (NPP) is not discouraged in their efforts to win the Volta Region which is the stronghold of the opposition, National Democratic Congress (NDC).

According to the National Organiser of the NPP, Sammy Awuku, despite how difficult it is for the NPP in the Volta Region today, he was hopeful that the region will one day become the stronghold of the NPP.

He said “a time will come one day when we will turn this place (Volta region) into our stronghold.”

Mr. Awuku made the observation when he toured some selected constituencies of the Volta Region to monitor the ongoing voter registration exercise which is currently in its penultimate phase; thus the fifth phase.

The six out of 18 constituencies toured by Sammy Awuku who was in the Company of the Regional Chairman, Makafui Woanya and the Deputy Youth and Sports Minister, Perry Okudzeto include, Ho, Ho West, Afadzato South, South Dayi, North Dayi and Kpando.

He expressed satisfaction for the registration exercise so far and urged them never to rest on their ores, despite the difficulty and challenges associated in campaigning for the NPP in the strong hold of their strongest political opponents.

He stressed that agents and workers of the party on the ground should not be intimidated by the opposition party of officials of the EC in their quest to prevent the “flagrant disregard of the C.I.” guiding the registration process.

The Deputy Sports Minister, Perry Okudzeto urged NPP officials and agents to ensure that no Ghanaian is prevented from registering. Nonetheless they should also not lose their guard to allow non-Ghanaians to decide who leads the country.

The NPP Regional Chairman, Makafui Woanya noted that the NPP in the region is not against residents of the region as they are the same people, however, they will also not allow the opposition NDC to facilitate the illegal act of facilitating the registration of foreigners.

This they will do through the right legally backed process and not take the law in their own hands. “We are a law abiding people,” he stressed.

I’m worried Central Region is allowing other regions to over...
11 minutes ago