But For Nana Addo, Damongo Would Have Had Water By Now 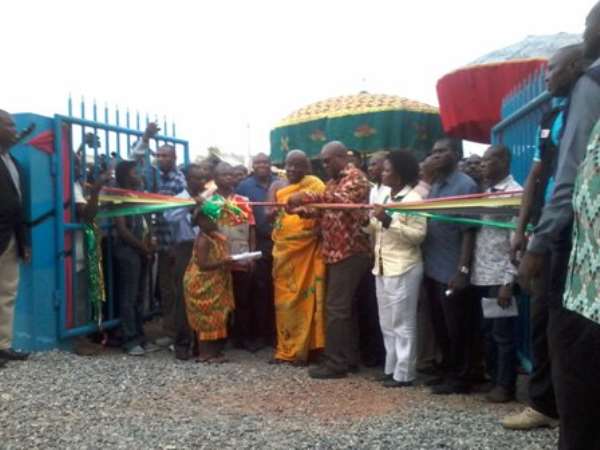 I have been wondering for the past week what the NPP takes us for in Damongo. As hard as I tried to understand what the political gymnastic is all about, I get angrier and hurt. Expectedly, their (NPP executives) and their ranting babies have taken to the media to use this scam of a sod-cutting to seek to attack John Mahama and the NDC. Well, I will like to set some records while I wait for the official response from the party in the region.

Yes, but for Nana Addo, Damongo should have water by end of 2018 and not to live and dream along this scam. Before I zoom to this substantive issue, let me make this clear, that, the NDC in 1998/99 extended electricity to the traditional capital of the Gonja Kingdom (ie Damongo). In 2015, the NDC led by His Excellency John Mahama completed and commissioned the 147.5km Fufulso-Damongo-Sawla road project which came with massive auxiliary infrastructure along. The NDC in around 1996/97 built and expanded the existing water facility to tap water from the Damongo Agric Dam to serve the Damongo township. These are incontestable facts.

Around 2002/03 when the Agric Dam needed to be desilted to allow for the facility to keep running, the NPP 1 sat and allowed the dam to dry out which ultimately resulted in the current water problems we have in Damongo. So, it is not true that Damongo never had taps flowing since time immemorial, but that the taps stopped flowing around 2002 and the NPP sat for 6 years without doing nothing.

Research has it that, by end of 2008, the pressing need of the people of Damongo and Gonjaland at large was the Fufulso-Damongo-Sawla road. In fact, this road became a death trap to the extent that as of 2008, vehicles plying between Tamale and Wa had to resort to using Tamale-Kintampo-Bamboi-Wa. This was the extent the road had become and the NDC had to fix this road. In fact, Gonjas who travelled from all parts of the Gonjaland for the annual Damba in Damongo at the behest of the Yagbonwura complained bitterly about the image the road aaa given the land.

After completion and commissioning later today in 2015, preparations for the extension of water to Damongo and it environs was started. By December 2016, even before we went for the election, the documentation and the loan facilitations were being done. So, on the 20th of December, 2016, a loan facility of $35m was arranged and was to be laid before Ghana’s Parliament.

Interestingly, the NPP side of the transition team wrote to Parliament for the agreement to be suspended but promised to continue from where the John Mahama administration had left of. Per the arrangement, work was supposed to start in the second quarter of 2017 and expected to be completed by end of 2018. So, if Nana Addo had continued from where John Mahama had left of, just as he continued with the road projects Mahama started in his hometown, Damongo by now should have water.

Facts are sacred and they must remain as such. The sod-cutting ceremony scheduled to take place in Damongo today, 28th July, 2020, is not just a camouflage but a total scam. Why? All that is to try to boost the chances of the NPP in the Constituency and an attempt to get at President John Mahama just as the scam they engaged in in Yapei yesterday, 27th July, 2020. This is the NPP for you.

The said water project which Damongo is supposed to benefit is not Damongo water Project as per the records in Parliament and at the Ministry of Water Resources. The said project is supposed to be a Tamale water project of which Damongo is treated as a suburb or a community amongst 27 others, including Tolon, Kumbungu, Pong-Tamale, parts of Tamale township and others. In fact, the office of the said project will be in Tamale while the facility itself will be in Yapei. So on what base is the sod-cutting scheduled to be done in Damongo? A camouflage, political gymnastics and a platform to campaign.

If the project were to start even today, which is not so because there is no contractor on-site and no work has started, Damongo would still have water around 2025 since it is a five-year project. So what were Nana Addo and his government doing for the past four years and only saw the need to come to throw dust into our eyes some few days to election 2020?

Well, I said this and will say it again, until Nana Addo pays back in full the water projects President Mahama gave to his hometown, Kyebi and other four additional communities, there is nothing special about anything Nana Addo will do in respect of water in Gonjaland. Maybe Gonjas are so accommodating and so good that, we will still hail Nana Addo than Mahama was ever hailed in Kyebi for giving them water.

Per existing records, on the 28th of March, 2014, President Mahama commissioned a 7.9m Euros water facility project for the following communities in the Eastern Region: -Kyebi, -Odenase, -Anyinam, -Apedwa and Nkwabeng.

For the records, the only water facility the people of this area had was established by the CPP government in the 1960s which could only serve about a population of 5,000. But the water facility President Mahama sent to these 5 communities including Nana Addo’s hometown of Kyebi, can serve up to a population of 30,000. This is what President Mahama did for the people of Kyebi, but he did this and never requested the people to hail him as a better son than Nana Addo’s father who was a President after Nkrumah’s CPP or evening hailed him as a better son than Nana Addo himself. In fact, President Mahama got attacked and insulted after commissioning this project in Kyebi. The simple reason was because of Mahama’s caution of the activities of galamsey and it’s expected effect on the water project.

So, it is cheap politics for Nana Addo and his NPP to seek to turn the people of Gonjaland against their own son, John Mahama. Meanwhile he, Nana Addo isn’t doing anything extraordinary to warrant any such praise as he seeks. Let me reiterate this point, that after John Mahama is sworn in on January 7, 2021, Insha Allah, Damongo water project will be treated as a stand-alone project and will be expedited far below the 5 year period this Bi-Water turnkey project has been scheduled to last. In effect, Damongo will get water earlier than 2025.