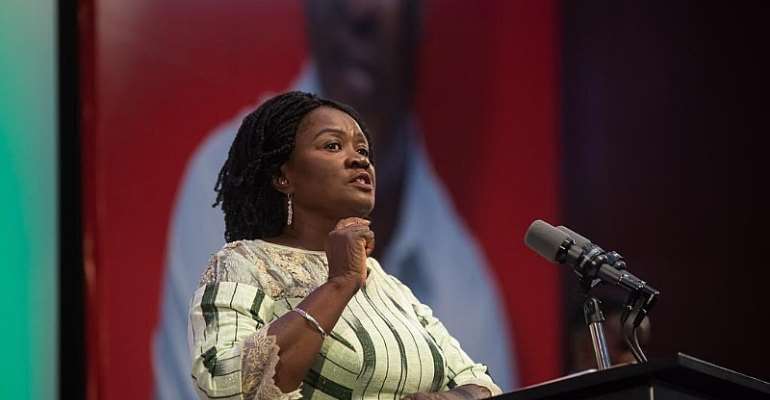 Senior lecturer of the University of Ghana and Political Scientist, Prof. Yaw Gyampo has scored the running mate to former President Mahama; Prof. Jane 70% for the delivery of her speech at an outdooring event on Monday.

According to Prof. Gyampo, he would have scored Prof. Jane more if she had started her speech by speaking extempore just as an accomplished academician would do without the help of even a teleprompter.

Prof. Gyampo in assessing the Monday' outdooring event noted few things which he talked about in his latest Facebook post.

In the Facebook post, the Prof Gyampo noted that Prof. Jane Naana touched on few issues which can be solved with her help if her party, NDC wins the elections. He admitted that the issues indicated by Prof. Jane are elementary problems the country is facing.

Prof. Gyampo further observed that Prof. Jane endeared herself to the listeners and people who watched the live event on TV. He noted that Prof. Jane Naana's posture makes it impossible for anyone to tag her as arrogant.

However, Prof Gyampo indicated that John Mahama spoke too much; indicating that his long address at the event could have been summarised.

This, according to Gyampo will give chance to his opponents to compare his speech to that of his running mate's speech which could lead to the exposure of contractions in the two speeches. Something that opposition communicators can chance on to score cheap political points.

1. The absence of Podium during the initial presentations of Asiedu Nketiah and Ofosu Ampofo, was a needless lapse, as it made speaking/reading a bit difficult for Ofosu Ampofo in particular. Flipping through the pages without a Podium was tight.

2. Asiedu Ntetiah’s extempore speech was good, particularly as he damage-controlled Sammy Gyamfi’s gaffe and showed much political maturity in handling the threat to deal with alleged unprofessional conduct of some security officers, in the on-going registration process by a future NDC administration.

3. The day wasn’t for JM. He spoke too much. He shouldn’t have given us the chance to compare his speech to that of his Vice Presidential Candidate.

4. The religious solemnity and the rendition of music by the choir, arrested much attention. The event (especially the beginning) was almost turned into a church. But given that we are a notoriously “churchical and religious people”, this didn’t spoil anything.

5. Prof Naana Opoku Agyemang endeared herself to her listeners and watchers. You cannot say you hated her after her speech. She borrowed Obama’s style of tracing background to season speeches, and in my view, this worked fine.

6 it was an outdooring and hence I was expecting her to be brief in her speech. She could have properly owned her speech by speaking extempore, as an accomplished academic, without the aid of a tele-prompter. This would have addressed the challenge she suffered at the concluding part of her speech, when clearly, the prompter stopped working.

7. She outlined a few issues that may be tackled with her support, including meaningful, quality and comprehensive education; vocational and technical training; institutional reforms to address youth aspirations; and creating opportunities that transcends political patronage. To my mind, these are known, basic and elementary challenges confronting us.

8. The economy is the most important consideration for all countries at the moment, given the impact of COVID-19 on the world. I was therefore hoping to hear something small around the area, especially, as she decided to outline some issues confronting us, that require action. But there was nothing said about the economy. One doesn’t need to be an economist to talk about our economy. Our Parliamentarians aren’t all economists, yet they debate government’s budget and economic policies.

9. All in all, I think she did well and she is one of the reasons why the 2020 elections would be competitive. I will score her 70 percent. I am unable to compare her to Dr Bawumia because they are two different personalities, each with unique attributes.