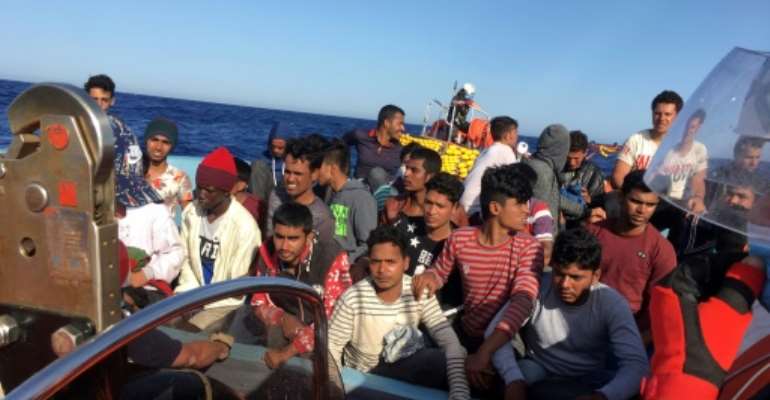 War-torn Libya is a key route for migrants seeking to make dangerous bids to reach Europe by sea. By Shahzad ABDUL (AFP/File)

Three Sudanese migrants were killed in a shooting in Libya after the country's coast guard intercepted them at sea and returned them to shore, the UN refugee agency said Tuesday.

The International Organization for Migration said separately that "local authorities started shooting when the migrants attempted to escape from the disembarkation point".

The UNHCR said it "deplores the tragic loss of three lives and calls for an urgent investigation" into the shootings at Al-Khums, a port city about 100 kilometres (60 miles) east of Tripoli late Monday.

"The shooting occurred after more than 70 people were disembarked from a vessel," the UNHCR said, adding that two migrants died at the scene and a third en route to hospital, while two more were wounded.

"The remaining persons who were disembarked were moved to detention," it said in a statement.

Libya has become a key route for irregular migration to Europe in the chaotic years following the 2011 overthrow and killing of dictator Moamer Kadhafi in a NATO-backed uprising.

"This incident underlines starkly that Libya is not a safe port for disembarkation," said UNHCR's Special Envoy for the Central Mediterranean Situation, Vincent Cochetel.

He called for "increased search and rescue capacity on the Mediterranean, including NGO vessels, in order to increase the likelihood of rescue operations leading to disembarkations in safe ports outside of Libya."

The IOM also stressed that "Libya is not a safe port and (reiterated) its appeal to the European Union and international community for urgent action to end the return of vulnerable people to Libya".

"The suffering of migrants in Libya is intolerable," said IOM Libya Chief of Mission Federico Soda, whose organisation reported that three people were wounded.

"The use of excessive violence results yet again in the senseless loss of life, amid a lack of action to change a system that often fails to provide any degree of protection."

Non-governmental group SOS Mediterranee France said on Twitter it was "shocked and outraged by the death of two people shot after their return to Libya".

The organisation operates migrant rescue ship the Ocean Viking, which was detained by Italy's coastguard last week over technical irregularities, a move the charity blasted as "harassment".

"Disembarking survivors in Libya is a violation of maritime law," it said.

"People continue to flee the war by sea while civilian relief efforts are hampered and state rescue capabilities are lacking," it added, calling on the EU to act to "prevent more deaths".

More than 100,000 migrants tried to cross the Mediterranean last year, with more than 1,200 dying in the attempt, according to the IOM.