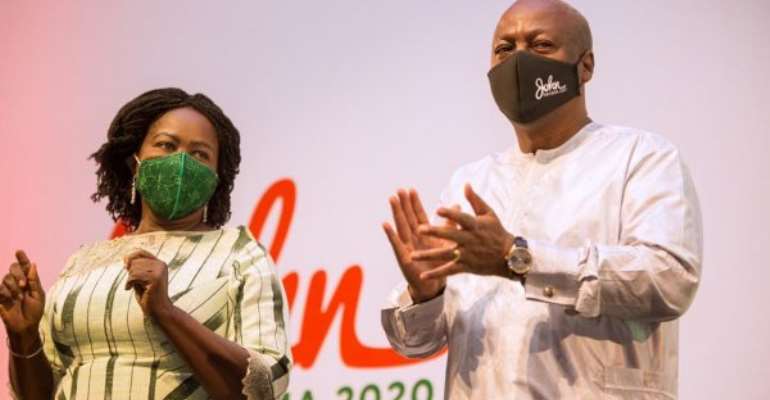 Former President John Dramani Mahama, Flagbearer of the National Democratic Congress (NDC), has assured Ghanaians that he would adopt a small size government should he win the December 7 elections.

He said the savings from governance due to the reduction in size would be channelled to paying district assembly members to collect accurate births and deaths information in their various electoral areas.

Former President Mahama, outdooring his running-mate, Professor Jane Naana Opoku Agyeman, said the next NDC government planned to embark on an aggressive job and entrepreneurial programme in the public and private sectors to deliver a minimum of 250,000 jobs every year.

He said the NDC believed in Ghana's future and would address the issues that affected Ghanaians.

“We will build a peaceful, secure and strong economy that provides sustainable jobs through a transformed, industrialised and digital economy.”

Mr Mahama said his administration would reinforce the independence of state institutions such as the Electoral Commission, Auditor General's Department, the Economic and Organised Crime Office and the Commission for Human Rights and Administrative Justice to operate better.

“In pursuance of social justice, I will vigorously push through a constitutional review that creates a fairer and just emoluments system and removes the distortions between Article 71 Office-holders and other public sector employees,” he said.

“We will as part of an Integrity for Development action plan, launch “Operation Sting. Operation Sting is an anti-corruption crusade, which under my watch, will involve massive, far reaching and practical governmental reforms,” he said.

That would be ruthless against corrupt political appointees and public sector workers, he said.

Mr Samuel Ofosu-Ampofo, NDC National Chairman, said the Party had the track record of promoting inclusiveness in governance and giving women the opportunity to serve at the higher level.