Message To Venezuela On 66th Birthday Of The Commandant 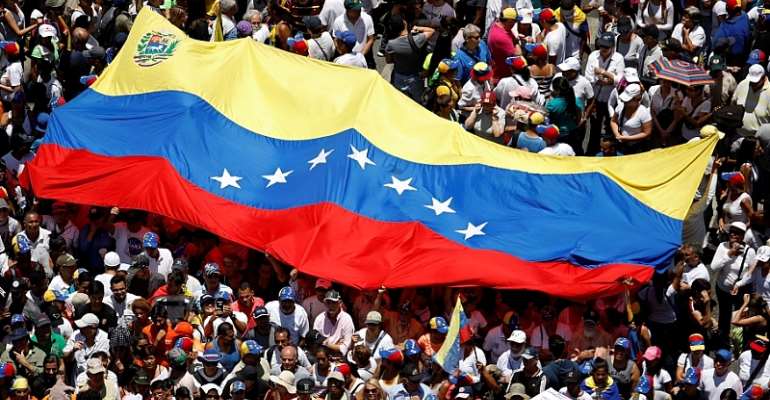 Peace to all Venezuelans!

This message of solidarity comes from a far distance, in Africa and from the Consular-General and President of the Governing Council of the Hugo Chavez International Foundation for Peace, Friendship and Solidarity (HCIF-PFS) on this historic day when we commemorate the 66th birthday of our Commandant, Hugo Chavez (Peace Be Upon Him). M name is Alimamy Bakarr Sankoh, and I salute every one of you, whether you live in Venezuela or outside the homeland. I say: “Chavismos! Chavistas! We are All Chavezs!

To me, anniversaries are a time for celebration and recognition, but they are also a time for sober reflection. It is therefore with a deep sense of humility and gratitude to God Almighty that I send you this solidarity message.

Nothing is so great than one to make the right choice and decision that affect one’s life. I need not to labour much here. Suffice it to say that, in life there are decisions made and these decisions must be consciously chosen and proudly carried. These decisions include first and most important is to know your Creator; the second is who you choose to marry; and the third is your passion for work and service. Your first decision determines how you live eternally. The second determines the quality of your family life. The third determines your legacy.

Do we remember the birth of Commandant Hugo Chavez by accident? Is it a mistake to express gratitude and appreciation to all those who preserve the legacy of our Commandant, including the Hugo Chavez International Foundation for Peace, Friendship and Solidarity (HCIF-PFS)? Is it not a noble path to honour Commandant Hugo Rafael Chávez (Peace Be Upon Him) in Africa, by creating an Organisation and named it after his illuminating personality? Or, does the sorrow part of March 5, 2013 mean an end to the vision of Hugo Chavez? Or, does it mean Hugo Chavez should be forgotten for his killers to continue stabbing at our backs?

Well, I want to assure you all that the Hugo Chavez International Foundation for Peace, Friendship and Solidarity (HCIF-PFS) will stand forever and as an organ to preserve the legacy of Commandant Hugo Chavez (Peace Be Upon Him), no matter the rugged road.

I want to take this opportunity now to show appreciation to constitutional President Nicolas Maduro, who, like his predecessor, is Afro descendant, for his dedication to preserving the legacy that was started and left behind by Commandant Hugo Chavez. As always, volunteers and members of the Hugo Chavez International Foundation for Peace, Friendship and Solidarity (HCIF-PFS) are storming the heavens with day-in-and-day-out-prayers that the angels be sent to constitutional President Nicolas Maduro to spread their wings to shield him from any harm, injury or sickness.

Africans who had witnessed the visits of Commandant Hugo Chavez on the continent know who the Venezuelan leader was and what he stood for. Africans have become deeply interested and supportive of the Bolivarian project, for peace, security, justice, development, prosperity and dignity. Let no one make mistake; we are bonded as a people with a history of common cultural values and struggle against slavery, colonialism, apartheid and racism.

Africa has a long history of solidarity with Venezuela and Commandant Hugo Chavez was steeped in that direction, and the contribution of African governments and leaders in the Non-Aligned Movement. Chavez’s acknowledgment of these contributions was not only historical, but also deeply felt by his actions. Among which include calling upon the World Bank, International Monetary Fund (IMF) and other international lending institutions to cancel debts owed by African countries; and also by made proposal for the creation of cultural bridges between Africa, Latin America and the Caribbean.

You will all agree that, Chavez popularity was not a magic and we need not the corporate media to say. You know as I do, that the Chavez’s government succeeded in reducing poverty in Venezuela, and ensuring that his government took back control of the national petroleum company, PDVSA, and used the proceeds out of the oil sales, to provide the social services that Venezuelans so badly needed. No amount of neoliberal rhetoric can dispute these facts.

Commemoration of the life and contributions of Hugo Chavez should not be about hero worship or uncritical praise of his unfinished Bolivarian project. There is no question that he set forth a singular profile, but we should not lose sight of the fact that he was just an individual, ultimately one among the many Venezuelans and people around the world, who love and fight for peace, democracy, human rights, justice, freedom and dignity.

We will forever remember Chavez as we do to others like Simon Bolivar, Ernesto Che Guevara, Fidel Castro, Kwame Nkrumah, Martin Luther King, Fidel Castro, Patrice Lumumba, Seku Toure, Nelson Mandela or Thomas Sankara. It is up to us to take up solidarity with our communities and peoples to prove that in memory, Hugo Chavez is still inspired by his leadership and service to humanity.

Today, I want to remind every citizen of Venezuela that, you are all blessed as a nation to be led by someone who is known for his strong political will, decisive leadership, and compassion for his countrymen and women. After the sorrow chapter of 5th March, 2013 when the death of Hugo Chavez was announced, the perpetrators of this heinous crime met to discuss the sharing of the natural resources of Venezuela. The assumption was that, since they have succeeded in killing Hugo Chavez, their next step was to impose a willing government in Caracas to do their bidding for control of the rich and abundant resources of Venezuela. What an evil design and tastes!

Venezuelans must be thankful to God for given them Maduro to succeed Hugo Chavez; else Libya is just a child’s play. I need not to remind Venezuelans again about the vision set-out by the Bolivarian project. What I know and it is the truth and existing reality in Venezuela today is that, constitutional President Nicolas Maduro is patriotic and hardworking leader, who wants to fulfill his goal of building a nation where opportunities abound and where Venezuelans are empowered to realize their aspirations. His sense of duty and fidelity to Venezuela stands as a motivation, for Venezuelans to work even harder to spread his message of peace and dignity of the homeland.

Outside Venezuela today, constitutional President Maduro is a man for the people, who is working so hard to build his country from where Hugo Chavez left before his painful assassination in 2013. It is befitting to pause for this one day, therefore, to render to Dr. Maduro, the honor and the gratitude deserving of a good leader, whose vision is revealed as each day unfolds. He acts both from the realm of power, and from the homes of the powerless.

We all know that the enemies of Venezuela have no other agenda other than to rape merciless the country’s rich natural resources and wealth, and make Venezuelans the next paupers after the people of Libya. As if the anti-democratic, anti-Venezuelan attacks in the corporate media were not enough to test the nerves and leadership of constitutional President Maduro, they now resorted to acts of state terrorism to achieve their evil agenda. Under these foreboding and grim circumstances how can we greet constitutional President Maduro with a hearty Happy 66 Hugo Chavez’s Birthday?

It is our fervent prayer in Africa that the Almighty continue to give constitutional President Nicolas Maduro good health and divine guidance as he safely navigates Venezuela through the rampaging waves of COVID-19 virus pandemic. Venezuelans should always count on our solidarity in this rugged journey.

In Africa as in Venezuela, we are observing the 66th birthday of Hugo Chavez at the height of the ongoing battle against the devastating Covid-19 virus pandemic. While it seems difficult to greet constitutional President Maduro on this important historic day due to Covid-19 menace, the Hugo Chavez International Foundation for Peace, Friendship and Solidarity considers Hugo Chavez’s birth as a gift from the Almighty.

Concluding, I want to thank the Almighty for giving life to constitutional President Maduro, and for lending the Venezuelan people his time and his indefatigable spirit to serve and protect his countrymen and women with his unorthodox ways and selfless brand of public service that puts to risk his life, honor, and the Venezuelan presidency.

Thank you all and may the Almighty bless!

Consular-General and President of the Governing Council

For and on behalf of the Hugo Chavez International Foundation for Peace, Friendship and Solidarity (HCIF-PFS)