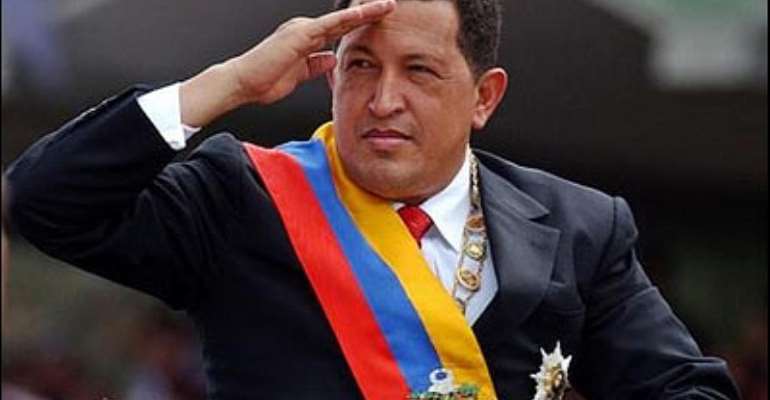 July 28 is the birthday of our Hero and Icon, late Commandant Hugo Rafael Chavez (Peace Be Upon Him). He would be 66 by now. We observe this great day in the history of our advocacy and solidarity.

Death is one of the hardest realities in life that everyone has to accept sooner or later. But, one should not loose strength of mind. The birthday of Commandant Hugo Rafael Chavez (Peace Be Upon Him) is a day we would forever celebrate, to preserve the legacy of a genius leader.

As usual on an occasion of birthdays, people receive gifts, Hugo Chavez has a special gift; it is US economic war against the Venezuelan people. That is his 66th Birthday gift. This is not surprising because the US has not abandoned its thirsts for the blood of the Venezuelan people, even after the murder of Chavez. Of course one does not need a soothsayer to tell us again why the US is hell-bent of imposing collective punishment on the Venezuelan people.

Commandant Hugo Rafael Chávez (Peace Be Upon Him) may not be physically to celebrate his 66 birthday today but cannot be forgotten – reason for what the Hugo Chavez International Foundation for Peace, Friendship and Solidarity (HCIF-PFS) exists. Chavez was a leader with exemplary qualities, and sterling example; and, a leader who lived in a manner that was unique and transparently selfless.

The purpose of this message is to extol the values of a genius leader who had complied with the directives and commands of his country’s Constitution to serve and protect his people. This message is about to honour and appreciate a man who died for the love of his country men and women. It is about to honour a leader who led by example so that others could follow. Only a few men have summoned such courage in the face of death- especially death by hi-tech assassination.

The path to greatness is a challenging one. Tens of millions of people had existed and left behind nothing as a legacy to preserve. There are also men and women who had existed but had their names written in gold and cannot be forgotten because they lived by values they saw greater than their lives. History has such men and women written down. The world always remembers such people for standing against oppression and injustice. The world doesn't remember cowards and selfish leaders. The world doesn't recall timid and greedy leaders.

If you follow through with your ideals and passions, the world will never forget you. Great men never die; their lives will continue to guide and inspire many to walk the same way they did. Society is designed to force someone into conformity and validation. Society was designed to make someone blend in rather than stand out. Do we have the courage to be different? That's the only way we can live forever in the hearts of men. To live without a purpose is to have come here to simply produce children and pay bills.

Born on 28th July, 1954 in Sabaneta, in the Barinas State of Venezuela, Commandant Chavez attended the Venezuela’s Academy of Military Sciences and graduated in 1975, with the rank of Sub-Lieutenant. He had a distinguished service record.

The second of 7 sons of two school teachers (Hugo de Los Reyes Chavez and Elena Friars de Chavez), Dr. Chávez was known for his concerns for various deserving causes. He was twice divorced and a Father of four wonderful children-Rosa Virginia, Maria Gabriela, Hugo Rafael and Rosines. He was a Roman Catholic Christian, and had a long and cherished history of personal sacrifice for the poorest of the poor.

Commandant Hugo Chavez (Peace Be Upon Him) political career started with his strong opposition to the government of President Carlos Andres Perez in 1990. His opposition to the wrongs of the ring wing fascist dictatorship in his country, landed him to prison for two years, and was later released on February 4, 1992 only to become a national hero and symbol of hope for peace, freedom and dignity in Venezuela.

The call to serve the Venezuelan people and rekindle their hope led Commandant Hugo Chavez to contest the election of 1998, and at the age of 44, became Venezuela’s youngest President. He was twice married and twice divorced. He had four wonderful children.

Despite smear attacks in the corporate media against his leadership and illuminating personality, Commandant Hugo Chavez (Peace Be Upon Him) was a world historic figure whose legacy will continue to leave its hemispheric mark on the side of a “Bolivarian Revolution” that guarantees social and economic freedom. Such a commitment is all but titanic, because it involves a more equitable distribution of wealth.

Chavez’s 14 years rule laid the foundation for transforming Venezuela, the world’s largest deposit of crude oil, from being a victim of degradation and dehumanization into a truly free, independent and dignified nation. He contested and won presidential elections for four consecutive terms, 1998, 2000, 2006 and 2012.

Throughout his leadership in Venezuela, Hugo Rafael Chavez had led his people to take away from foreign thieves and their local fascist collaborators control over the oil resources of his country and used the income to benefit the Venezuelan people and support the cooperation and development of countries subjected to merciless plunder and economic mess. In his patriotic valour, Commandant Chavez used proceeds from the sale of the Venezuelan crude oil to reduce poverty, improve the lives of the working masses, and strengthen national sovereignty. Local food production was increased (and food imports cut), access to clean water was assured for everyone, illiteracy was practically eradicated, education was made free up to and including universities, the number of doctors was increased four-fold, malnutrition and infant mortality rates were reduced, and social security for all senior citizens was assured.

One of the successes of the leadership of Hugo Chavez was to enhance Venezuela’s role and contribution to international peace, friendship and solidarity and unifying progressive forces of Latin America in their struggle for peace, stability, freedom, integrity and dignity. He ensured that oil prices were kept low for the poor and made serious contributions to the economies of Latin America through oil subsidies and discounts which angered the US. His example and charismatic leadership in establishing a welfare state on the model of socialism of the 21st century played a major role in the ongoing transformation process in Latin America.

Hugo Rafael Chavez was a firm proponent of Latin American and Caribbean integration; in 2004, he joined Cuban revolutionary leader, the late Fidel Castro Ruz to initiate the Bolivarian Alliance for our Americas (ALBA), which was created to encourage fair trade on the principle of justice, fair play and solidarity. He further advanced this integration process in 2011 with the creation of the Community of Latin American and Caribbean States (CELAC), to advance sovereign development, democracy, improvements in the quality of life of the working class, and solidarity among the peoples and nations of the world.

Commandant Hugo Chavez (Peace Be Upon Him) special character as a man of peace and flamboyant champion of freedom and humanity, as well as his commitment and ability to building bridges and fostering friendly and harmonious relationships amongst nations placed him high above others. His leadership role in Latin America as depicted by his activities, policies, programs and decisions was unrivalled. His outspokenness, conviction, courage, special love for the poor and foresight in crossing cultural boundaries as peace broker were great achievements, and these are well-documented for posterity to absolve him.

The leadership-role-model exhibited by Commandant Hugo Chavez was a great example of service to humanity, and his commitment to humanitarian endeavours was an inspiration to mankind. His love for the environment was bountiful. His balanced, broad-minded, mental viewpoints are invaluable addition to his humanitarian endeavours. And his special love and equal treatment of all races had impact on the lives of millions of people around the world.

To many Africans on the continent and the diaspora, Commandant Hugo Chavez was referred to as the Osagyfo (after the great Osagyfo Kwame Nkrumah of Ghana) of Latin America for what he stood for. He was referred to, also, as the bridge builder between the poor and the rich, the farmer and the office worker; the symbol of hope for the needy; the renovator and innovator of ideas based on socialism of the 21st century; the freedom fighter and, above all, the worth emulating.

The Hugo Chavez International Foundation for Peace, Friendship and Solidarity (HCIF-PFS), since its inception in 20017 owed respect to people who stood true to their highest ideals even in the face of mortal danger. We have a strong affinity for men of courage, conviction, tenacity and honour.

By all means Hugo Chavez was not a poor man during his time. He had all it took to lead a peaceful and prosperous life. He was a senior military officer in the Venezuelan Army. So, he was doing very great. But his passion for his people and their future wellbeing was too great for him to have looked the other side. A great man is one who thinks more about the wellbeing of his people than he thinks about himself. Hugo Chavez was just such a man. He saw the wellbeing of his people as something that was more important than his very life.

He faced threats even before his eventual death. His family was rumoured to have attempted prevailing on him to jettison his struggle for his own personal safety reasons but he courageously told them he was willing to face the wrath of the brutal imperialist onslaught. He did honour his word. He knew his end from the moment he chose the path of war against oppression and injustice. He knew his end from the moment he started opposing the activities of right wing fascist dictators. Truly indeed, Commandant Chavez (Peace Be Upon Him), we want to believe, was killed by those who wanted him out of the scene.

Commandant Hugo Chavez was indeed a rare patriot because his life epitomized enduring love for Venezuela. His love for humanity was particularly defined by self sacrifice. Death has only taken his flesh, but not his ideas.

The achievements that set Commandant Hugo Chavez apart and which had made him subject of edifying posthumous commentaries, though undeniably solid were far from personal. They were solid altruistic achievements of a man whose life epitomized love and self sacrifice. The world will forever be proud of the leadership and illuminating personality of Commandant Hugo Chavez (Peace Be Upon Him).

We cannot find words to express the profound grief that has befallen humanity. Commandant Hugo Chavez was greater than words, and he is more eternal than words. Words alone cannot praise him better than his achievements as a great leader. No words suffice to console us for the painful assassination of this genius man. Hugo Chavez shall continue to be in our heart; in our blood and in our marrow. He shall continue to be our role model and icon in the service of humanity.

You can kill the messenger, but not the message.

For and on behalf of volunteers and members of the Hugo Chavez International Foundation for Peace, Friendship