We Don't Trust That You'll Pay Us, Sign MoU With Us First – Customers Of Collapsed Financial Firms Doubts Mahama's Promise 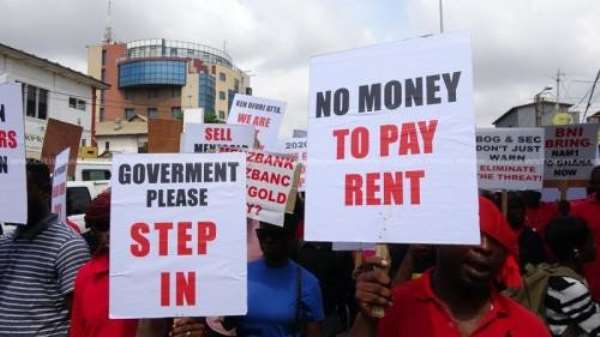 The Chairman of a group calling itself the Affected Customers of GN Bank and Other Affected Banks, Mr David Ampofo has said that promise by former President John Mahama to pay the locked-up funds of all the victims of the financial sector cleanup exercise should he win the 7 December 2020 general elections is welcoming.

“We’ve been pushing this government, we’ve basically hit a dead wall, so, any government, we don’t care which government; anyone who promises us and will deliver by paying us the money, we’ll wholeheartedly welcome it because all we are interested in is the money”, he said on Class91.3FM’s mid-day news 12Live on Tuesday, 28 July 2020.

Mr Ampofo, however, told Class News in an interview that just as the victims have lost trust in the Akufo-Addo government, as far as getting their money is concerned, they cannot also trust him to deliver his promise unless they sign a pact to that effect.

“We probably have to go and sign an MoU or some kind of a pact with him [Mahama]”, insisting: “The thing is, we’ll have to sign a pact with him because we don’t trust him either just like we are beginning to distrust this government”.

In his view, the erstwhile Mahama administration is not blameless as far as the financial sector troubles are concerned.

“The ex-government is a major contributor to why we have this financial mess so for him to come out right now, maybe he’s realised his errors and promising to pay us. We welcome it but we’re not going to take his word for it”, Mr Ampofo added.

“We’ll have to sign an agreement with him before we’ll do anything with him”, he reiterated.

According to him, “Anybody who can help us retrieve our monies, not five years, not 10 years, as soon as possible; one year is perfect for us or within one year, that’s fine for us”.

“We’ll welcome any such person and we are happy to partner the person in the fight to retrieve our money because we’ve got pensioners who are dying, we’ve got people who cannot afford university fees; so many people who were relying on the interests on these monies. We’ve not borrowed any money, it’s our hard-earned cash. To say we’re disappointed in what the government is doing now is an understatement”.