Akufo-Addo Has No Real Solutions For Ghanaians – Mahama 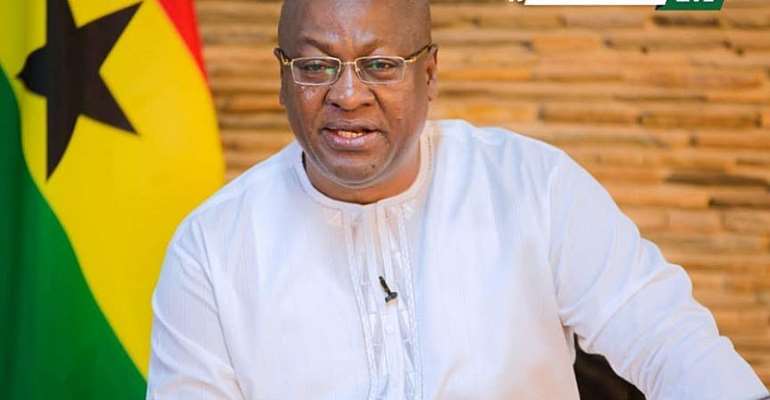 Former President and flagbearer of the opposition National Democratic Congress John Dramani Mahama has stated that President Akufo-Addo is bereft of ideas and has no real solutions to the problems of Ghanaians.

The former President addressing party members at the University of Professional Studies in Accra (ACCRA) to officially outdoor his runningmate, Professor Jane Naana Opoku Agyeman, Mr Mahama called on Ghanaians to come together and kick out the Akufo-Addo administration in the December elections.

According to Mr Mahama, the last four years under President Akufo-Addo has led to several job losses, deliberate collapse of indigenous companies and dehumanizing Ghanaians.

Mr Mahama added that a future NDC government will within one year pay all customers whose investment have been locked up as a result of the financial sector cleanup undertaken by government.

“We will Within one year of being in office pay customers of the collapsed financial institutions all funds locked up. We shall not put together any long plan that will delay the payment,” Mahama stated at the outdooring of his running mate Professor Jane Naana Opoku-Agyemang in Accra.

He described Prof. Opoku Agyemang as the best choice for Ghana adding that she is more than competent to be the vice president of Ghana and contribute to the development of the country.

“With Prof Naana, we can say we have made the best choice for Ghana. I have in my partner a veep who will ensure that we present a winning ticket and an experienced ticket to the people of Ghana,” Mr. Mahama said during an outdooring ceremony for his running mate in Accra Monday.

The former president also condemned misogynistic attacks on his running mate and promised that the NDC will run a campaign devoid of insults and vitriolic attacks.