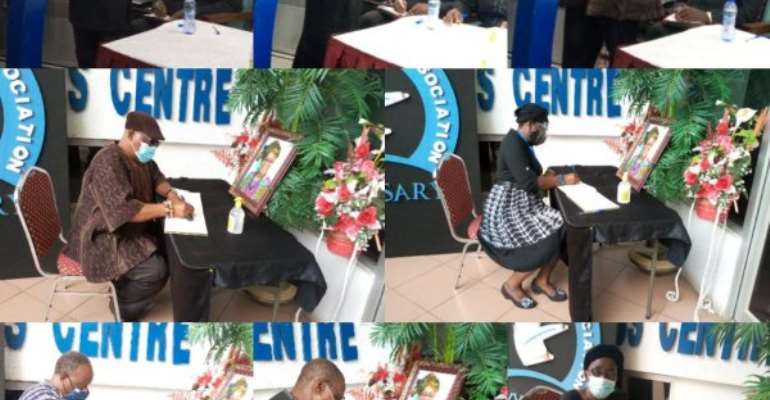 Dr Doris Yaa Dartey, a Communications Expert and a Media Consultant, who passed away on Sunday July 19, 2020 would be laid to rest on August 6, 2020 in Accra.

The private burial would follow a funeral ceremony for the former Member of the National Media Commission (NMC) at Accra.

The details were announced on Monday, when the Ghana Journalists Association (GJA), officially opened a Book of Condolence at the Ghana International Press Centre, Ridge, in honour of her memory.

The ceremony, adorned with a brief religious service by Pastor Joseph Aaron Hagan of the Seven Day Adventist Church, was taken from the Bible Verse 'Ecclesiastics 3:1, which says, “To everything there is a season, and a time for every purpose under the heaven, a time to be born and a time to die”, to encourage members of the Association and the entire public to make good use of time and make a positive impact whiles alive.

Mr Affail Monney, the President of the GJA, said Dr Dartey was a symbol of boundless energy, unconfined joy, known for her infectious smiles and ironclad commitment to work.

Her life, he said, resonated her deepest value-sacrifice, diligence and excellence, adding that, she was successful in whatever she did because she executed all her assignments and undertook all endeavours with unrestrained love, chronic zest and incredible gusto.

The GJA President wrote: “Your demise is a tragedy of shattering magnitude and devastating circumstances for the media community in general and the family in particular. A Jackley of all trades and master of all. May your workaholic, generous and humorous soul rest in peace,” in the Book of Condolence.

Nana Kwasi Gyan-Apenteng, a former Chairman of the NMC also wrote: “Yaa, No words can describe our loss with your departure. Let me just say Da Yie.”

Mr Kabral Blay-Amihere, another former Chairman of the NMC, noted: “You served your nation to the best of your ability. You touched so many lives, helped to defend institutions and Ghana's democracy. Fare thee well, Dr. Yaa Dartey.”

Madam Ajoa Yeboah-Afari, a former Chairperson of Editors Forum Ghana and former GJA President signed: “Yaa D, as I used to call you, I never imagined it would be this way when you promised to meet me here at the Press Centre on your return from Europe. YaaD, da yie, my sister, da yie.”

A Legal Practitioner, Mr Akoto Ampaw, described the late Dr. Dartey as: “Impressible, warm vivacious fearless great friend and resolute advocate and champion of free expression and media freedom. Great and extraordinary teacher and mentor. You will never be forgotten for your selfless commitment for Ghana. May your gentle soul find eternal rest.”

Madam Doris Adabasu Kuwornu, Vice President of the Ghana Association of Writers (GAW) said: “On behalf of the National Executive Council and all members of GAW, we wish the family and GJA strength. We will all miss Dr. Dartey's love, integrity, commitment to duty, and to everything she touched with honesty. May she rest in peace and in God's power.”

Ms Darkoa Ofori-Yirenkyi, a daughter of Dr Dartey, who announced the details of the funeral ceremony said due to COVID-19 safety directives, the burial service would be streamed live on online platforms for other well-wishers to join.

She announced www.dorisdarteymemorial.org as the website created to give information on Dr Dartey and what she believed in.

Ms Ofori-Yirenkyi said although her mother battled breast cancer, her challenges did not deter her from giving out her best to humanity.

“She remained realistic and pragmatic to fight her situation until the very end, while discharging her duties. That is why people did not notice her problem,” Mrs Ofori-Yirenkyi said.

Dr Dartey, she said, wrote a book on her experience with breast cancer, as a proof of her courage, which would be published soon.

She expressed gratitude to the GJA and other institutions for their unflinching support to the family.

Dr Dartey, who succumbed to the complications of breast cancer at the Korle-Bu Teaching Hospital, died at age 67.