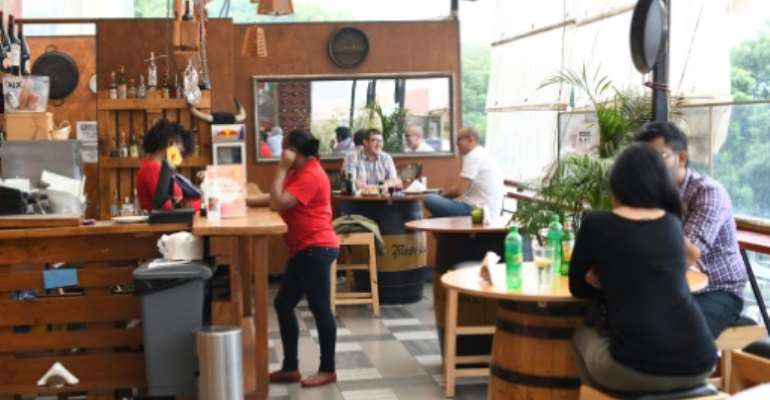 Restaurants in Kenya must close from 7:00 pm. By Simon MAINA (AFP/File)

Kenyan President Uhuru Kenyatta on Monday banned the sale of alcohol in eateries and restaurants and extended a curfew in a bid to halt a steep rise in coronavirus infections.

Kenyatta delivered a stern dressing down to Kenyans for "reckless" behaviour that has seen cases triple in the past month to 17,975, while 285 have died.

He said there was notably an "aggressive surge" among young people who were socialising "particularly in environments serving alcohol" and were in turn infecting their elders.

He ordered that a nationwide curfew from 9:00 pm to 4:00 am will remain in place for another 30 days and "there shall be no sale of alcoholic beverages or drinks in eateries and restaurants" over the same period. Restaurants will also close from 7:00 pm.

"All bars shall remain closed until further notice," Kenyatta said.

Like many nations in East Africa, Kenya took swift action to combat the coronavirus, closing its borders on March 25 when it had only 25 cases, shutting schools and imposing a curfew while advising people to work from home.

However bars took advantage of the fact that restaurants were allowed to remain open and began selling food.

Three weeks ago Kenyatta lifted movement restrictions around the capital and key cities and announced international flights would resume on August 1.

The education ministry has however declared the school year lost and said classes will resume next year.

Kenya's restrictions have hit the poor hard, and it was a clamour to re-open the economy that pushed Kenyatta to lift the measures.

"Our economic health is tied to keeping our infections and fatalities as low as possible... I tell you there will be little tourism, scarce investment and falling trade if our headlines start to match those of countries that have been hardest hit by the pandemic," said Kenyatta.

The president warned Kenyans not be lulled into a sense of "false comfort" by the country's relatively low fatality rate of 1.6 percent.

"Let us not think that we are immune or special, we are not. Please fellow Kenyans, let us not follow the examples we have seen across the world," he said.

Kenyatta stressed that countries with the "most extensive and advanced medical facilities" in the world have been overwhelmed.

"In many countries, they even lack sufficient space in the mortuaries to hold bodies and bodies are left lying on streets," he said, describing "very lonely, scary burials".

"We cannot allow this to be our fate in Kenya," he said.

"Our victory will be to suffer minimal harm and minimal loss and to shorten the length of this war."