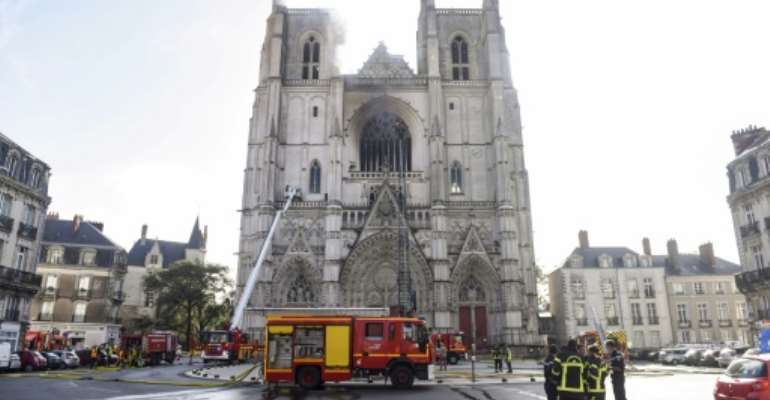 The blaze destroyed the 17th-century organ of the cathedral in Nantes, as well as priceless artefacts and paintings. By Sebastien SALOM-GOMIS (AFP/File)

A volunteer church assistant has confessed to setting the fire that severely damaged a Gothic cathedral in the western French city of Nantes, his lawyer said Sunday, though his motives remain a mystery.

The 39-year-old, an asylum-seeker from Rwanda who has lived in France for several years, was arrested Saturday after laboratory analysis determined that arson was the likely cause of the blaze, the local prosecutor's office said.

"My client is cooperating," lawyer Quentin Chabert said at a news conference in Nantes, without speculating what prompted the attempt to burn down the Cathedral of Saint Peter and Saint Paul.

Nantes's public prosecutor Pierre Sennes told AFP on Sunday that the volunteer had been notified in November 2019 of an order to leave the country, after officials refused to grant him residency.

But so far "he has not elaborated in detail on his motivations" for setting the blaze, Sennes said, adding that a psychiatric evaluation has been ordered.

"What he did ... is dramatic for everyone," said Father Hubert Champenoishe, the rector of the cathedral, on Sunday.

He said the volunteer, who had been "at the service of the cathedral" for four years, had "certainly been marked by the events which marked his country".

"When someone cracks up, it is to everyone's astonishment."

Prosecutors opened an arson inquiry into the early morning fire on July 18 after finding that it broke out in three different places in the church, which the volunteer had locked up the night before. 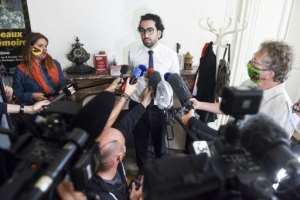 At a press conference Sunday in Nantes, lawyer Quentin Chabert declined to elaborate on why his client had tried to burn down the cathedral.. By Sebastien SALOM-GOMIS (AFP)

He was taken in for questioning the next day but later released without charge, with the cathedral's rector saying "I trust him like I trust all the helpers".

But Nantes prosecutor Pierre Sennes said in a statement Saturday that he had been arrested and charged with "destruction and damage by fire", and faces up to 10 years in prison and 150,000 euros ($175,000) in fines.

"He admitted during his first appearance for questioning before the investigating judge that he set three fires in the cathedral: at the main organ, the smaller organ, and the electrical panel," Sennes told the Presse-Ocean newspaper on Sunday.

The blaze came 15 months after the devastating fire at the Notre-Dame cathedral in Paris, which raised questions about the security risks for other historic churches across France.

While firefighters were able to contain the Nantes blaze after just two hours and save the main structure, its famed organ, which dated from 1621 and had survived the French revolution and World War II bombardment, was destroyed.

Also lost were priceless artefacts and paintings, including a work by the 19th-century artist Jean-Hippolyte Flandrin and stained glass windows that contained remnants of 16th-century glass.

Work on the cathedral began in 1434 and continued over the following centuries until 1891.

It had already been damaged by a more serious fire in 1972.

The French government has said it will ensure the cathedral's restoration, though very few, if any, elements of the main organ are likely to be saved, said Philippe Charron, head of the regional DRAC state heritage agency.

"It will take several weeks to secure the site... and several months of inspections that will be carried out stone by stone," he said.