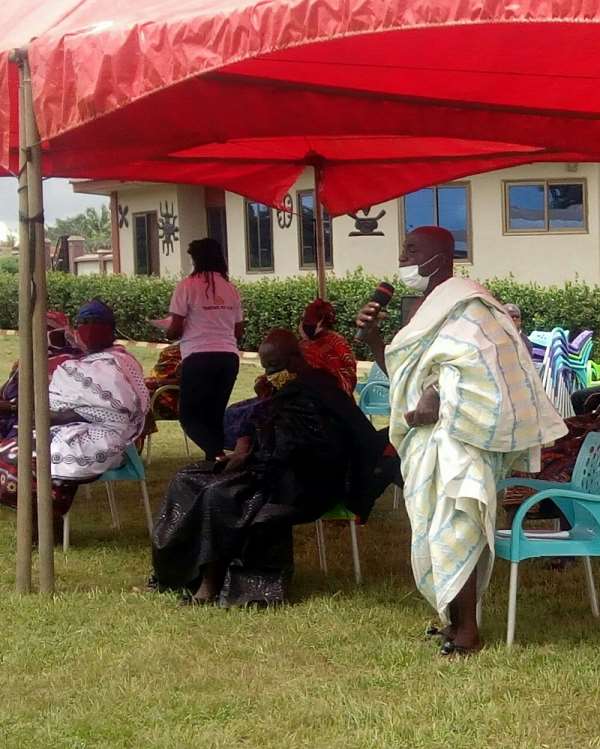 Otumfour Osei Tutu II Charity Foundation together with USAID have shown readiness to help fight COVID-19 in Ahafo Region due to the rate it is spreading.

This was revealed when the executives of the two bodies paid a courtesy call to the chiefs and assembly members of Kenyasi No.1 Traditional Council to discuss the best way to fight against the disease which has currently infected 36 persons in the Asutifi North District where Kenyasi is situated.

A member of the team, Nana Dabo Agyekum disclosed that Otumfour Osei Tutu II, Leader and President of Ashanti Kingdom and also the Founder of Charity Foundation, has decided to assist all communities within his kingdom in the curbing of the novel coronavirus and the first step to achieve this task is by meeting the chiefs and assembly members who represent residents.

According to him, the outcome of the deliberations would be forwarded to the Asantehene, Otumfour Osei Tutu II to have way for the second step to commence where the team will meet the entire community in a form of mini durbar with COVID-19 protocols and directives by the Country's President in mind to further share genuine concerns of the disease and how to have an effective fight against it.

He stated that his team is extremely overwhelmed per the facts and figures the chiefs and assembly members shared at the meeting on the disease showing clearly that with a little push the spread of coronavirus in Kenyasi halted.

Nana Dabo Agyekum commended them for providing several interventions such education, the supply of Personal Protective Equipment (PPEs) among others to the people in the fight and pleaded with them to continue with the sensitization to keep residents free from COVID-19 which has infected 116 persons in Ahafo Region within a little space of time and a worrying situation to Otumfour Osei Tutu II.

Some of the chiefs and assembly members interviewed after the meeting thanked Asantehene for such initiative which is of a major boost to the community concerning the fight against the deadly disease. According to them, the only missing item to help fight it is the lack of directives enforcement.

They explained, most residents in the community and the region as a whole are not enforced to adhere to the wearing of face masks once they are out from their homes and it is a worrying situation. Chiefs, Assembly Members, individuals, and companies have distributed a number of face masks to the people but unfortunately, when they are out you do not see them wearing and their reasons are not tangible.

"Soon the police will team up with task force to punish such persons for sanity to thrive," they said.

They appealed to Otumfour Osei Tutu II to extend the initiative to other parts of the region to help fight the disease although the government is handling things in accordance.

The meeting which highly adhered to all COVID-19 protocols and held at the forecourt of the palace allowed them to share ideas of the disease for an effective fight against it.

It will require hard work, collective effort to break eight-...
2 minutes ago