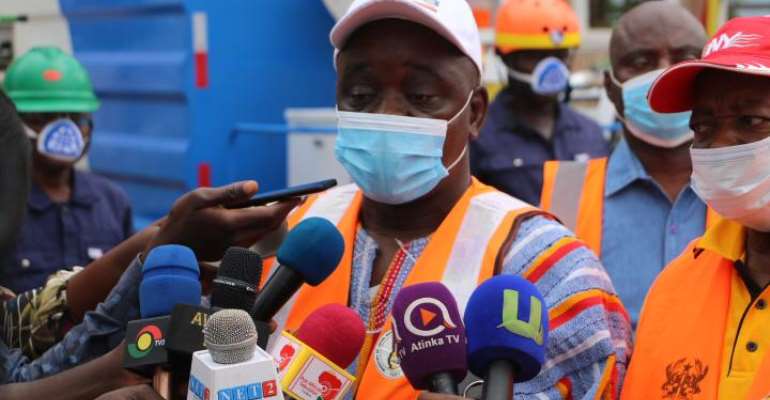 The North East Regional Minister Solomon Namliit Boar has disclosed that the COVID-19 cases in the region stopped due to the first disinfection exercise that took place a few months ago.

According to him, the current case count in the region stands at nine (9) maintaining that the current stable case count is the resultant effect of the first disinfection exercise.

The Minister revealed this on Saturday during the launch of the Second Phase of the Disinfection Exercise in Nalerigu in the North East Region.

“I must say that the first disinfection that took place was applauded by every tom dick and hurry and I must say that we have really benefitted from it,” Namliit Boar emphasized.

“…The cases we had is on a very low side and we want to believe that the exercise contributed to it”.

The Minister who doubles as the Member of Parliament for Bunkpurugu further explained that the second phase of the disinfection exercise forms part of the government's comprehensive approach to confront the COVID-19 head-on and curb its spread.

He added that this is a demonstration of President Akufo-Addo’s commitment to ensure that the citizenry is safe from COVID-19.

“ I want to express my delight to president Akufo-Akuffo for his continued effort to ensure that we live a very dignified life,” the Minister stressed.

Whilst commending the Local Government Ministry and Zoomlion for their commitment and zeal respectively in the execution of the first exercise, the MP for Bunkpurugu also gave the assurance that the COVID-19 measures that the North East Regional Co-coordinating Council has put in place would help compliment the effort of government to further reduce the case count in the region.

“So from here we will be moving to various markets and as usual we know Zoomlion will be at their best. We have 75 markets and we know they will do a very good job,” the MP for Bunkpurugu emphasized.

On his part, the North East Regional Manager for Zoomlion Mr. Edmund Kwaku Vidjah expressed the company's commitment towards executing what he called an important national exercise.

He stressed that all the 75 markets in the six (6) districts in the region will be disinfected adding that it is to keep the markets and public places in the region safe and free from the coronavirus.

“The exercise does not end there, I think the coordinating council has put in place measures for the protocols to be adhered to,” he added.