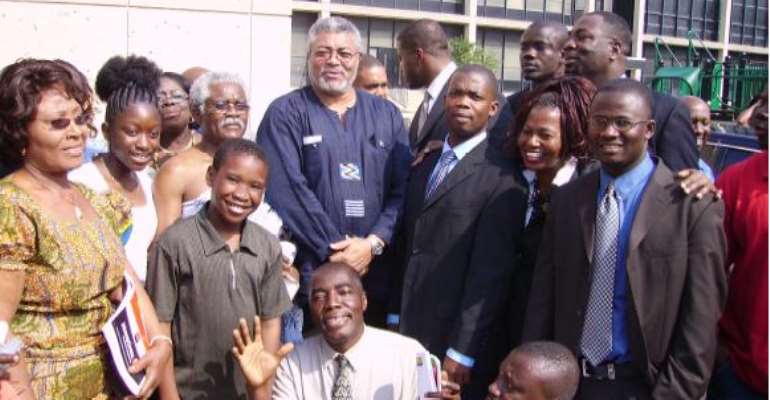 Former President Rawlings some well-wishers after the church service.This picture talks for itself that the earlier publication on Ghanaweb was false.

My attention has been drawn to a publication on Ghanaweb with Daily Guide as the source of the report that former President Jerry John Rawlings was escorted from a Chicago Church last Sunday during a thanksgiving service due to an incident with a lady who claimed to be a daughter of the executed former head of state, General Ignatius Acheampong.

Second, Rawlings was not, and I repeat not accompanied by Louis Farrakhan, to the service, he mentioned a sermon preached by Farrakhan earlier in the day, that did not mean the honorable minister was at the Christ Oasis Church.

That Rawlings asked President Bush to learn from Louis Farrakhan, was a blatant lie concocted by Daily Guide to serve its own dubious purposes! Rawlings simply made reference to Farrakhan's address on Family values, which he said President Bush could adopt in order to fight against American Family disintegration.

Almost at the end of the service, blessing and dispersing the congregation, Victoria Acheampong, who claimed she is the daughter of former head of state, Acheampong, was holding a picture of the former head of state and walking towards President Rawlings when she was stopped by the president of the Ghana National Council, Mr. Reuben Hadzide in her tracks.

She then slapped Mr. Hadzide in the left cheek and was wrestled away by the security of the former president without any fanfare. There was alcohol smell on Victoria during the incident and she did not mutter any words.

One white guy,who appear to be in his fifties and unkempt was heard pleading for the security to leave Victoria alone. He was the only white guy at the service!

After the incident, Rawlings asked and was given the chance to address the parishioners and he went on to thank the organizers and the congregation for inviting him to the service.

Rawlings was his usual self, refused the advice of his tight security and took a few pictures with some of the church--goers before leaving.

Daily Guide could not have been more melodramatic with its statement “The scene brought the church service to an abrupt end”. This is simply fictional.