Eternal mothers, whores or witches: being a woman in politics in Zimbabwe

By Gibson Ncube - The Conversation 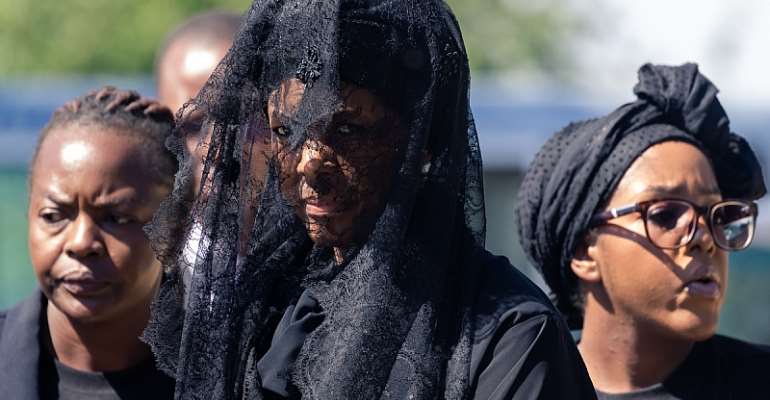 The political arena in Zimbabwe is a de facto male space in which women play very peripheral and insignificant roles. Author and scholar Panashe Chigumadzi sums the situation up in an op-ed article , writing that

Politics in Zimbabwe remains a man's game, and virility is a measure of one's ability to rule over others.

It is not the place of women to rule, especially over men. Women who dare to aspire to rule are considered to be wild and unruly.

Grace Mugabe , the former first lady of Zimbabwe, is one such woman, I argue in a paper on the tropes used to describe women in politics in the southern African country.

Grace rattled political cages in 2019 in her bid to replace her ageing husband , both as leader of the ruling ZANU-PF party and also possibly as president of the country.

But instead of focusing on the merits and demerits of her political interests, the recurring comment was that she was a sex-starved hure (a Shona word for “whore”). This sexist slandering has not been used to describe just Grace Mugabe. It has been used systematically to denigrate women who aspire for any political positions.

From 'gold-digger' to mother figure

Grace became a public figure in 1996 when she married Robert Mugabe after the death of his first wife. She had previously been his personal assistant. At the time of the marriage, she was defamed for having an affair while his first wife, Sally, was terminally ill.

Moreover, Grace was labelled a gold-digger because she had married a rich and powerful man who was 40 years her senior. Sally Mugabe (1931-1992), former first lady. Keystone/Hulton Archive/Getty Images

She was often compared to Sally, the latter characterised as womanly, motherly and homely. Sally was a saint, according to public opinion, partly because she had assumed a more ornamental role as first lady.

However with time, Grace was embraced as the proverbial mother of the nation and the endearing appellation of Amai (mother) was bestowed on her.

In 2014, she took her first steps in politics when she was elected president of the women's league of the ruling Zanu-PF party. She was fronted as the face of the Generation 40 faction within the ruling party. Generation 40 was a group of young party members who felt there was need for a change of power from the old guard that had waged the liberation war. Grace began a series of rallies across the country. The rallying call at these events was the Shona phrase Munhu wese kuna Amai (Everyone, side with Mother).

She used the rallies to attack not just members of the opposition but more importantly members of the competing faction which was headed by current president Emmerson Mnangagwa . Her outbreaks were far from diplomatic, they were blunt, scathing and contemptuous .

From mother figure to 'whore'

It was around the time of the countrywide interface rallies that the name Amai was gradually replaced by the tag of hure. Academic and writer Rudo Mudiwa in the article On Grace Mugabe: coups, phalluses, and what is being defended, explains how Grace came to be called hure and shows how the name was linked to the November 2017 “ coup that was not a coup ”:

Grace, already branded a harlot, was considered a threat to the nation-state on the basis that she was improperly influencing Mugabe, weaponising their pillow talk to sway a senile old man. Her speeches, nakedly ambitious, only seemed to confirm that it was she who was in power in Harare. The phallus had been deposed.

The hure label was used because Grace had subverted the image of the domesticated first lady who was not interested in politics. In Mudiwa's argument, the soft coup that overthrew Mugabe was actually a defence of patriarchy and a counter attack against the anxieties that Grace was causing men in politics. The military intervention could thus be read as the protection of male dominance which had been challenged by a woman who had left behind her decorative role as a silent, domesticated and thus respectable woman. Grace Mugabe addresses a religious gathering and rally in 2017. JEKESAI NJIKIZANA/AFP via Getty Images

What this tells us

Grace Mugabe's short stint in politics has shown that women are far from being afforded a place in Zimbabwean politics.

Sexist and misogynistic slurs such as hure point to how women continue to be sexualised and objectified. The treatment of women in politics is no different from how women in general are regarded in the country, because their competencies are often disregarded or unnoticed. Emphasis is placed rather on their bodies and sexualities.

In the few instances that women are accorded a space in politics, they are used as pawns in factional battles within political parties, as Grace was.

When she attacked other women politicians like former vice president Joice Mujuru , she was not considered dangerous. However, when her verbal attacks targeted men like Mnangagwa she was deemed to be treading treacherously. When the coup that toppled Mugabe was in progress, the men in the Generation 40 faction clandestinely left the country, leaving Grace alone to deal with the military.

The future of women in Zimbabwean politics

As long as safe and conducive spaces are not created for women in Zimbabwe, they will continue to be sidelined from positions of political power and authority. As Zimbabwe continues to aspire towards democracy and democratic ideals, despite the odds, more needs to be done to level the political playing field.

Women who do choose to venture into the field of politics will need to do so fully aware of the multifarious challenges that lie in wait. They will need to be strategic in their actions and how they navigate a space that is slanted heavily against them.

For as long patriarchal societies, such as Zimbabwe, do not recognise the vast potential women have as knowledgeable politicians and skilled decision-makers, an equitable society cannot be realised.

The author's paper on women in Zimbabwean politics is available to read here .

Gibson Ncube does not work for, consult, own shares in or receive funding from any company or organization that would benefit from this article, and has disclosed no relevant affiliations beyond their academic appointment.

By Gibson Ncube, Associate Professor of French, University of Zimbabwe