I Trusted The MCE So I Didn't Wear Nose Mask; I Contracted Covid-19 And Nearly Lost My Life, Spent Ghc12,000 — Deputy CEO Of CODA Reveals 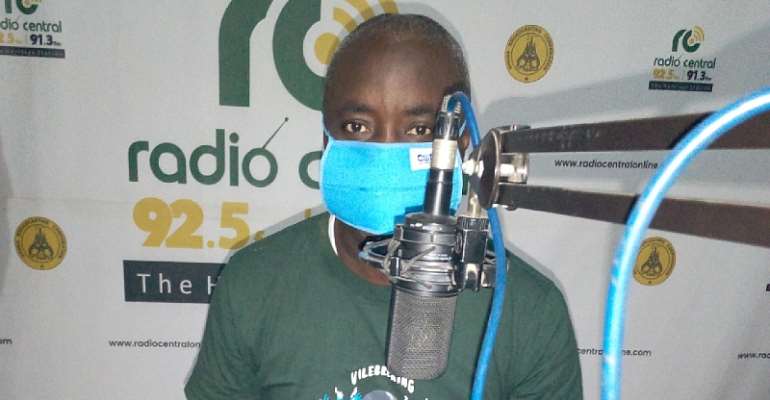 The Deputy Chief Executive of the Coastal Development Authority (CODA) and a Vice-Chairperson of the Central Regional NPP, Kofi Karikari Bondzie has admonished all Ghanaians not to entrust anyone with their health following an experience he had which led him to contract coronavirus.

He added that Covid-19 is real and Ghanaians must take it seriously and abide by all the necessary protocols to safeguard their life.

When asked how he got to know he had contracted Covid-19, he said he contracted the disease on a visit to Sekondi Takoradi.

According to Mr. Bondzie, after they had finished their formal meeting in the Sekondi Takoradi, the MCE in the person of Hon. K. K. Sam requested for a personal conversation with him.

"We only spoke for about five minutes and I left," he explained that because of trust he never wore a nose mask and neither did Mr. Sam.

He continued that, after several days the news broke out that Mr. K. K. Sam had passed to eternity and the cause of his death was coronavirus, "there I knew I was in trouble."

He continued his narration by saying that he was feeling feverish and went for a check-up.

The results proved that he wasn't having malaria but he instructed the health professionals to administer malaria treatment, which they did.

Mr. Bondzie added that he normally gets malaria within July to August, so, that feeling made him think that it was his normal malaria.

According to him, several days passed and he had same feelings and getting weaker each passing day which prompted him to visit the hospital again.

He added that this time around he requested for a Covid-19 test.

Mr. Bondzie said while waiting for the Covid-19 results he told the health professionals at the University of Cape Coast Hospital to begin treating him for coronavirus. "Initially the health professionals were reluctant and insisted they can only do so when the results confirm he is positive. I told them to start because I cannot wait any longer and might be dead by the time the results come through".

Expounding further, the Vice-Chairperson of the ruling NPP in the central region said, he was later moved from the UCC hospital to CCTH.

He narrated that he was taken to an isolation centre for treatment. "It's like leaving in cell. Not even your wife, children or any family relation is allowed to see you except health officials".

He recounted that, that experience was harrowing and he knew he was going to die at one point but the assurances from the health professionals were very encouraging and gave him hope.

He explained further that, within the first few days he was so weak that nurses had to be cleaning him from time to time. "We have a very good medical team at the CCTH and I must thank them for their support and care. They did extremely well for me and I thank God for them".

According to him, the CEO of CCTH Dr. Eric Kofi Ngyedu together with the medical team that took care of him deserve some commendation for a good job done.

He revealed that coronavirus affected his pancreas to the extent that he started having an irregular sugar measurement in his system.

According to him, sometimes when his sugar measurement was taken in the morning, it would read for example 2.2, in about three hours it could drop to 3.4 and latter rise to 11. 2. "This made tracking the sugar movement cumbersome for the health professionals to track and help me. It was very hectic," he explained.

Elaborating further, he said before contracting coronavirus, he had no health history with either high or low sugar problem but all of a sudden Covid-19 strikes him irregular sugar levels in his body which he is now battling even though he has recovered from Covid-19.

Down Moments with Coronavirus

Responding to how he felt during all these trying times, Mr. Bondzie said, the encounter that downed his spirit was food services.

He continued that every time food was brought to him, it was placed at the entrance of his door and was called to come pick it up. "A nurse can only enter my room and serve me my food when they are dressed in their coverall otherwise, I must pick it up from my entrance without seeing anyone".

He continued that those times were difficult moments for him. According to Mr. Bondzie, he lost his sense of taste, and most times vomited all the food that he ate.

But with all these notwithstanding, Mr. Bondzie said, one encouraging moment when he was battling with Coronavirus was when one friend of his risked life to come to the hospital and gave him the elbow handshake.

He continued that, the gentleman said, "once I've shaken your hand, I know you're alive and you shall not die".

This according to him happened after several days of hospitalisation.

Stigmatisation has been part of our society. People Stigmatise others for various reason and as society grows, we expect such socially deviant behaviour to subside but, it still persists. People Stigmatise rape, HIV/AIDS, TB and now Covid-19 victims.

Stigmatisation could be an act of describing or regarding someone or something as worthy of disgrace or great disapproval. Unfortunately, this happened to Mr. Karikari Bondzie due to coronavirus.

He recounts three main stigmatization experiences that broke his heart and hope it never reoccurs again.

According to the Deputy CEO, after he had been discharged, he decided to attend a party meeting.

With the second experience, Mr Bondzie explained that his driver's friends were sacked from a bar they have been regular customers because of their association with him. "Their boss is Covid-19 patient and we cannot allow his driver to patronise this bar. Even though I call it positive experience because I want my driver to stop drinking but the experience is very bad for him," he fumed.

Narrating his third stigmatisation encounter, the Central Region NPP Vice-Chair said, his outfit is collaborating with the Fisheries Commission to distribute outboard motors.

According to him, his counterpart was to call him so they could meet to ascertain the number of outboard motors before handing it over to the Central Region Minister.

He continued that, he waited and the Fisheries Commission guy never called him all because he is a Covid-19 recoverer. "I was furious and gave it to him well, well."

In concluding the discussion, Mr Bondzie cautioned that all Ghanaians must be very careful and that he wouldn't wish the experience even for his enemy.

He continued that, the only way we can overcome the coronavirus fight is to wear facemask at all times and at all places.

According to him, the doctors at CCTH are very good because they did very fantastic job. He continued that "we in the Central Region need to cherish our own health professionals especially those at CCTH."

He further revealed that he spent about ¢12,000.00 in battling coronavirus. "Not every treatment regarding Covid-19 is free and citizens must know this and be careful."