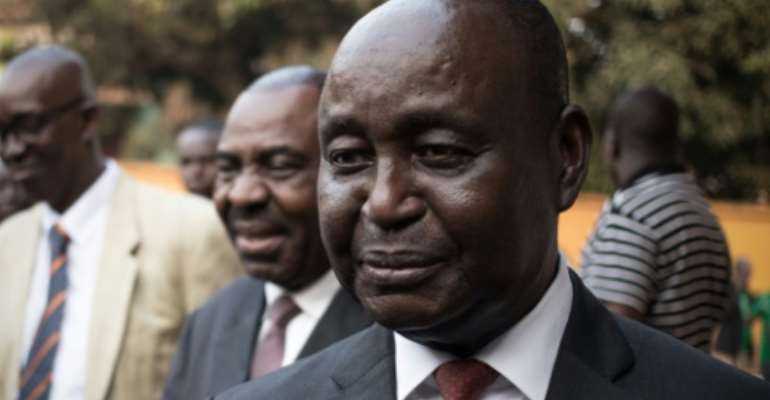 Bozize is still under UN sanctions. By FLORENT VERGNES (AFP/File)

Controversial former Central African Republic head of state Francois Bozize on Saturday announced he is running in the December presidential election, a high-risk vote in a country ravaged by civil war since his ouster in 2013.

Militants of Bozize's Kwa Na Kwa (KNK) party have been meeting in Bangui since Friday and the announcement was widely expected.

"The party congress has just designated me candidate of the Kwa Na Kwa for the next presidential election ... I solemnly accept the mission you have entrusted me," he said in a speech that was also transmitted live on Facebook.

The veteran politician took power following a 2003 coup, before being overthrown himself 10 years later by Michel Djotodia, head of the mainly Muslim Seleka rebellion in the predominantly Christian country.

Since then, the poor, landlocked country has spiralled further into bloodshed, marked by vicious intercommunal violence.

"The many sufferings of the Central African people, as well as the call of the activists have pushed you to come back to the fold," said the KNK's secretary general, Bertin Bea, addressing Bozize earlier.

France intervened militarily in its former colony from 2013 to 2016 to push out the Seleka, winding down the operation after Faustin-Archange Touadera was elected president.

Touadera governs today with the support of a large UN peacekeeping operation, but most of the country is controlled by ex-rebels and militias.

The government signed a peace deal in February 2019 with 14 armed groups, who typically claim to defend the interests of specific communities or religions.

Violence has since generally receded, but there are still bloody flare-ups, typically sparked by fighting over resources.

The fighting has forced nearly a quarter of the country's 4.7 million people to flee their homes.

Bozize is still under sanctions by the United Nations for his role in the 2013 crisis, during which he is accused of supporting the Christian anti-Balaka militias.

At the end of January, he said that "nothing" would prevent him from running as a candidate in the president election and that he would ask the UN to consider dropping the sanctions against him.

Bozize will very likely run against the incumbent Touadera, whose candidacy has not yet been officially announced, even if observers regard it as a certainty.

There have been flare-ups of violence between militias, who often exploit ethnic tensions.

UN experts warned in mid-July that the "prospect of elections has provided armed groups with another reason to maintain and increase their territorial control".

Their report pointed to an influx of foreign fighters, principally from Sudan, which shares a border with the northeast of the CAR and regularly sees inter-militia fighting.

Four suspects arrested over attacks on motorists along GIMPA...
45 minutes ago

Chinese man crushed to death at Suhum
45 minutes ago