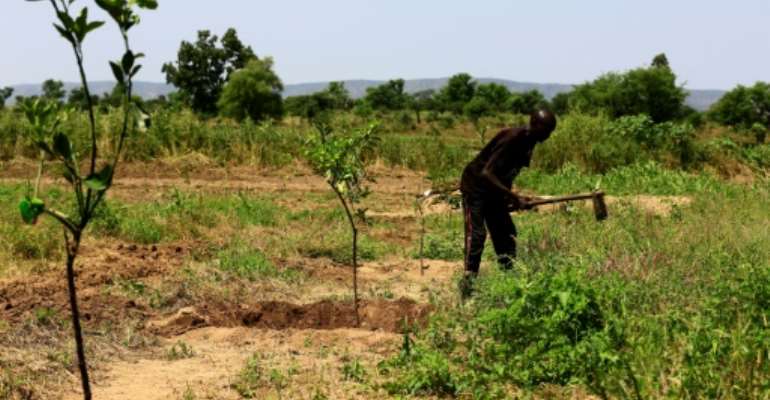 Land ownership was a main driver of the deadly conflict that broke out in Darfur in 2003. By ASHRAF SHAZLY (AFP/File)

Gunmen killed at least 20 civilians including children in Sudan's war-torn Darfur as they returned to their fields for the first time in years, a witness and a tribal chief said Saturday.

Twenty people were also wounded in the attack in Aboudos, some 90 kilometres south of Nyala, the capital of South Darfur province, tribal chief Ibrahim Ahmad told AFP by telephone.

Darfur has been devastated since 2003 by a conflict that has killed 300,000 people and displaced 2.5 million others, according to the United Nations.

Those killed in Friday's attack were mostly displaced farmers who had returned to their fields under a government-sponsored deal struck two months between "the original landowners and those who took their fields", Ahmad said.

"But armed men came on Friday and opened fire, killing 20 people, including two women and children," he said, adding that the toll could rise because some of the wounded were in serious condition.

A survivor, speaking anonymously for fear of reprisals, told AFP the farmers had returned to their fields to take advantage of the rainy season and plant crops.

"Because of the violence we hadn't been back for 16 years, and we thought it was over," he said.

"The gunmen arrived on pickup trucks, some of which had machine guns on them. They surrounded us from all four sides and opened fire."

The survivor said 14 lost their lives immediately, while a further six died in hospital.

The conflict in Darfur broke out after ethnic African minority rebels, complaining of marginalisation took up arms against the government of now ousted president Omar al-Bashir.

The state hit back with violence led by the Janjaweed, a feared militia that was recruited mainly from Arab pastoralist tribes.

Bashir is wanted by the International Criminal Court over charges of genocide and crimes against humanity in the conflict.

The violence has abated in recent years although armed groups have continued to carry out attacks.

"The Bedouins want to throw us off the land our grandparents farmed," the survivor said.

Adam Mohammed, an expert on Darfur, said land ownership was a main driver of the conflict between farmers of African tribal origins and Arab Bedouins.

"During the years of fighting, farmers fled their lands and Bedouin herders took their place," he said.

Bashir was deposed by the army in April 2019 following months of mass protests against his rule, mainly over economic woes, and a transitional government was sworn in late last year.

The 76-year-old is currently on trial over the military coup that brought him to power more than three decades ago.

Under his rule, several conflicts broke out as rebels complained of racial discrimination, marginalisation and exclusion.

In Darfur, the Janjaweed was accused of applying a scorched earth policy against ethnic groups suspected of supporting the rebels, raping, killing, looting and burning villages.

The ICC said in June that it had taken custody of fugitive militiaman Ali Kushayb, a senior Janjaweed commander wanted on 50 counts of war crimes and crimes against humanity committed in Darfur between 2003-2004.

That came months after a coalition of nine rebel groups -- including factions from Darfur -- signed a preliminary agreement in January with the government after weeks of talks.

But violence has persisted in the desperately poor region.

In late June and early July, hundreds of protesters camped for days outside a government building in the Cental Darfur town of Nertiti to demand that the govern beef up security, after multiple killings and looting incidents on farmland and properties.