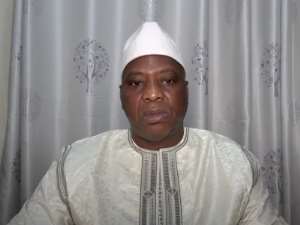 Dr. Morissanda Kouyaté has just been named the co-winner of the United Nations Nelson Rolihlahla Mandela Prize - 2020 edition. As Executive Director of the Inter-African Committee on Harmful Traditional Practices (IAC), Dr. Kouyaté is a leading figure in efforts to end violence against women in Africa, including female genital mutilation (FGM). He spoke with Africa Renewal’s Franck Kuwonu on, among other issues, what inspired him to take up the fight against FGM, progress he has seen over the years, and what the Prize means to him as he continues in his quest to end FGM:

Congratulations, Dr. Morissanda Kouyaté! How does it feel to win such an award?

I first learned about it a few days ago through an email from the office of the President of the United Nations General Assembly, Tijjani Muhammad-Bande. I read it and when I woke up in the morning, I thought it was a dream. I had to read it again after taking a shower to make sure it was true. I felt very honoured.

You are known for your fight against female genital mutilation (FGM) in Africa. When did you start this journey?

It begun in 1983 in the Tougué region in the Republic of Guinea.

I understand there was an incident that would change you forever. What happened?

Indeed. It was one evening in 1983 at the hospital in Tougué where I was a young medical director when 12-year-old twin girls were brought in. They had undergone genital mutilation and were bleeding profusely. The parents were distraught and despite the tremendous work we did at the hospital to save their lives, the twins died. I was devastated. It was as if I had lost my own daughters. It was horrible!

How did that incident affect you?

I was so shocked that I actually took three days off. I couldn’t work instead I just sat down and wrote a pamphlet against FGM. During those days, FGM was referred to as female circumcision. I wrote a strong-worded pamphlet to say that it was a practice that could lead to tragedies, like the death of the twins. The pamphlet would later land on the table of the World Health Organization (WHO) officials.

Before then, I knew there was FGM in Kouroussa, where I come from, but I had never questioned it myself. The death of the twins changed everything and that's where my journey to fight this vice started.

How long after that experience did you manage to persuade representatives of 16 countries in Africa to agree to set up the Inter-African Committee on Harmful Traditional Practices?

A year later, on 6 February 1984 with the support of WHO and other civil society activists, we created the Inter-African Committee on Harmful Traditional Practices Affecting the Health of Women and Children (IACW) in Dakar, Senegal.

To honour that date, we proposed to the United Nations to declare 6 February the International Day of Zero Tolerance for Female Genital Mutilation. It is the day the Inter-African Committee was initially created and today it has become a great date. A date that reminds all humanity to get rid of FGM.

States Parties shall prohibit and condemn all forms of harmful practices which negatively affect the human rights of women and which are contrary to recognised international standards. States Parties shall take all necessary legislative and other measures to eliminate such practices, including:

Only 16 countries attended the Dakar meeting. Was it difficult to get other countries on board?

In 1984, it was extremely difficult to talk openly about FGM. Therefore, not all countries were on board. Since then, it has been a long and difficult road to mobilize everyone - the international community and the whole world - against the practice. However, today, our organization is represented in 29 African and 19 non-African countries around the world. We are represented in all continents.

We know that social change is slow, very slow. So we must persevere and find ways and means to accelerate them. Let’s not complain about the slow pace, but we must accelerate.

Your organization is present in only 29 African countries, out of 54. Does that mean the rest do not have FGM?

Not at all. Today, FGM is present all over the world. With immigration, people are moving with their traditions and practices, so FGM, even though it is more concentrated in Africa, is now everywhere.

It is also important to note that the Inter-African Committee is not only fighting against FGM. It fights to eliminate all traditional practices affecting the health of women and children, including childhood diseases. So, we should be in all African countries and around the world. This is why we are about to expand to all African countries.

You have been in this fight for over three decades. What are the main changes that have taken place on the continent over the years?

First of all, FGM has been totally demystified and is no longer taboo. It may seem trivial, but it is a great achievement knowing where we started from.

Secondly, the African Heads of State and governments, and the African Union have made a strong commitment to this fight against FGM through the Maputo Protocol [SM1] (The Protocol to the African Charter on Human and Peoples’ Rights on the Rights of Women in Africa in effect since 2005).

A few days ago, Sudan, which was initially one of the most difficult countries to convince and which is a member of the Inter-African Committee, strengthened its legislation against FGM. I would like to take this opportunity to congratulate the Sudanese authorities and the Sudanese people for making this possible.

And thirdly, the people themselves have taken ownership of this fight, especially young girls and boys who are now organizing themselves to resist FGM, and all forms of mutilation, as well as child marriage.

For me, the most important achievement is that the survivors are standing up to protect themselves.

And finally, the prevalence rate of FGM is declining across the continent and globally.

Have the lives of women and girls improved as a result?

It is not just about improving the lives of women and girls. If there is no violence against women, if their rights are not violated, they will be able to improve their lives themselves. This is not a gift to be given to them, it is their right, their full right, which everyone must respect.

What setbacks did you encounter along the way?

The setbacks I have encountered in this struggle are many but the biggest obstacle was the resistance of leaders. Political leaders, religious leaders, and even some traditional leaders who, despite knowing the negative consequences of FGM, continue to defend the practice for political, religious or self-promotional purposes. This is the hardest setback for me. It shocks me in more ways than one.

Yet, you haven't given up. What drives you to soldier on?

The Tougué twins. For me, they represent all the girls and women in Africa and around the world who continue to suffer from violence, discrimination and are undervalued. I will never stop until all harmful practices against girls and women are eliminated globally.

According to the WHO, about 3 million girls are still at risk of FGM every year. What are the chances of these numbers dropping to zero and how soon could that happen?

International organizations, including the United Nations, like long-term programmes – 15, 20, 30 or even 40 years. Objectives that are set for the long term, which I can understand, but we should avoid applying this to FGM, since this is a physical and psychological aggression.

So, instead of saying we will eliminate FGM in one generation, I propose we set a clear objective. If we all get together, if we work together hand in hand in Africa and throughout the world, in ten years, that is to say by 2030 like with the United Nations Sustainable Development Goals, we must totally eliminate FGM.

Now that you’ve won the award, what are your plans for the future?

I feel invigorated and more engaged. But most of all, I’m very humbled, like the great man that Nelson Mandela was.

I will fight even harder to mobilize more human resources and more material and financial resources to eliminate FGM and any other harmful traditional practice including child marriage.

I would like to thank the United Nations for awarding me this prestigious prize. I will do my utmost best to earn the confidence of the international community in improving the lives of girls and women.

What is your message to those who still strongly defend FGM?

To them, I say: stop defending the indefensible. Attacking girls and women physically and psychologically is neither culturally right nor justifiable on health grounds. It is a pure violation of their rights, and this is unacceptable.