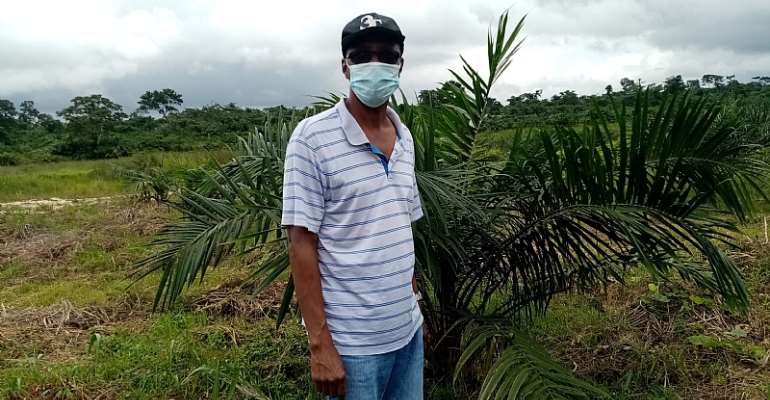 The One District One Factory initiative as promised by the current New Patriotic Party government is targeted at transforming the economy of the country through industrialisation. This is geared towards creating jobs for the teeming unemployed youth in the country.

Residents of the Obuasi Municipal have not been left out in this industrialization drive that seeks to utilize the raw materials of the various districts in the country.

Mr. Ohene Adu Aboagye said through the efforts of the Adansi Traditional Council led by its President Nana Opagyakotwere Bonsra Afriyie and the Obuasi Municipal Assembly, he is in the process of establishing a 1000 acre Oil palm plantation and processing factory in the Obuasi Municipality.

He anticipates that fruits from the Oil palm plantation will serve as readily available raw materials for the Oil Palm factory and also buy from outgrowers who have already benefited from seedlings under the Planting For Exports and Rural Development (PERD).

Mr. Ohene Adu Aboagye, the CEO of LEAPAB who rose through the ranks to become General Manager, Sustainability, Anglogold Ashanti, Obuasi Mine told the Information Services Department that the factory will offer the people of Obuasi employment opportunities in a bid to diversify the local economy of Obuasi.

At the first phase of his project, the Ex Miner said he supports the idea that it is prudent to have readily available raw materials for a factory before putting up the physical structures. Citing the Komenda Sugar Factory as an example, he said "Factories especially agro-processing factories are destined for failure when it has no reliable source of raw materials hence it is important not to put the cart before the horse".

The CEO of LEAPAB said the gestation period for the project is between 3 to 4 years. He said he has so far accessed some credit facilities from the Ghana EXIM Bank; the major financial institutions for the 1d1f program. He hopes to access more facilities from the bank during the infrastructural stage.

Support from the Municipal Assembly

Mr. Ohene Adu said the Agric department of the Assembly has so far been very supportive. He mentioned that they have provided technical support for him throughout the period. He said he is in close contact with the beneficiaries of the Government's Planting for Exports and Rural Development Programme (PERD) which distributed 15000 Oil Palm Seedlings to farmers last year. He asserted that they will serve as Outgrowers for his Oil Palm plantation.

The CEO further stated he will still work closely with the Assembly when it comes to the upgrading of roads linking the factory and other support.

He said currently he has employed about 50 workers from the surrounding communities to work on the farm but he hopes to employ between 200 to 300 workers when it starts full operation. This he believes will bridge the unemployment gap in the Municipality.

Currently, two (2) other factories; Citrus and Bolts and Nuts factories are undergoing processes to start full operations in Obuasi.