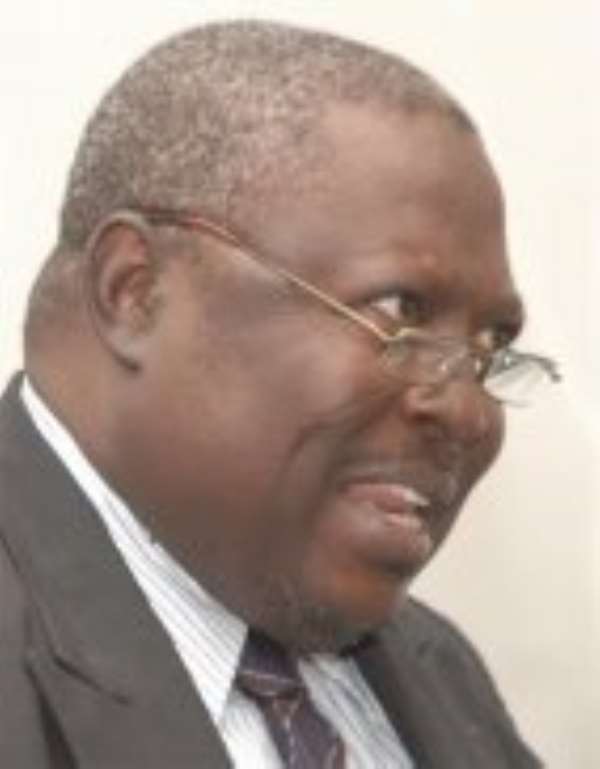 The nemesis of Mr Martin Alamisi Amidu Kaiser has nothing to do with systemic failure or self-inflicted corruption in Ghana, but it has all to do with his self-hate, empty bitterness and a lone man wandering in his own world which doesn’t exist.

A man who will ever live to be praised even in a failed state like Ghana, will live and die by his consistency and principles. Any man who changes his principles depending upon the situation, person, place or existing condition, is a tainted man with corrupt sight. The reformed Martin Amidu under Nana Addo is the man in the second context.

Of a man who patronized the sentimentalities of the unsuspecting Ghanaian; of a man who got the Ghanaian trapped in the empty obsession of the name Mahama and corruption, the least he can deliver to us is to chase, catch and retrieve our GHC 51m from Woyome for us. At least we could use that to prepare the one hot meal for the vulnerable Ghanaians suffering in the wake of this covid19 pandemic. He did promised us that anyway.

Strangely but expectedly, Amidu Kaiser keeps changing his colors; from a citizen vigilante who rode on the back of Woyome to light and fame; to the lead campaigner of Nana Addo who spewed baseless allegations against John Mahama; to an appointee who instead of working rather resorted to writing several epistles to explain his ineptitudes.

Owing to this, the confidence and respect most people especially those in the middle class had for Amidu is waning faster than lightening from an irregular rain pattern. His hatred and bitterness for John Mahama became too visible that a vindictive but desperate Nana Addo saw and exploited same. This marks the reason Nana Addo offered Amidu a job in the NPP manifesto even before winning power in 2016.

Less than six months of his appointment, the already tired Amidu couldn’t find his legs to stand on, so he started complaining about everything. First, it was a faulty law that established his office; he then zoomed into lack of personnel, office space and budget to work with; and then to government officials stifling his efforts. A strong but promising Citizen Vigilante has been turned into a chained dog who gets commission to bark at some intervals.

Our hard-earned taxes have been invested in Amidu which he can’t repay. The Ghanaian is suffering from abuse of power by this vindictive President. We are indeed suffering from insecurity, high taxes, arrogance in its new form, but in all these, we still have the hope that Martin Amidu will one day collect our money from Woyome for us. We are hoping that our barking dog will come home one day with a catch from the bush. For we are tired of his barking without biting.

Even when he’s being used and exploited, he can’t see and feel same because of his inbuilt hatred for John Mahama. And due to this, he is bent on proving a point where there is none.

Anytime the government back is against the wall, they throw a pound of flesh at their barking dog and release him from his cage and commission him to bark in order to divert attention and change the tone of the national conversation.

We are all aware that yesterday, 23rd July, 2020, an empty mid-year budget was presented to the parliament of Ghana. Amongst the many biblical quotations and slogans were the expenditure lines for the COVID funds. Ghanaians at large were outraged by the figures, and more especially the over GHC 54m supposedly used for food for the vulnerable within the 21 days lockdown period. Ghanaians took to social media and mainstream media to express their disappointments over this broad day robbery.

Just when we were about to settle, today 24th July, 2020, we are having to deal with yet another ego-driven-two-paged letter written by our Special Prosecutor (Martin Amidu) to the Foreign Affairs Minister, supposedly meant to request the Ministry to facilitate one Samuel Mahama’s coming to Ghana to help in some blind investigations into the NPP planted Airbus scandal. Coincidentally, the release of the letter came on the day the NDC was commemorating the 8th Anniversary of the passing of Prof JEA Mills, the man who gave Amidu his political life in NDC 2.

All these while, I thought Interpol had issued a red alert for the arrest of same Samuel Mahama some two weeks ago. What happened to that red alert? Indeed a sinking government will struggle to hold on to a the weakest straw it can find. Amidu has no credibility left in eyes of the Ghanaian.

Nothing of Airbus had and will ever have direct negative bearing on the lives of Ghanaians. COVID has ravaged lives and businesses, and the government is struggling to contain this and just fix the businesses. All of governments attempts mile back to nothing but thievery and more suffering for the Ghanaian.

Frontline health workers are complaining of common PPE to work with. Doctors are dying; nurses are dying; government officials are dying; students are dying; these are the issues the confused Ghanaian is worried about and not some government engagements in a decade ago.

Between Martin Amidu and Mr Daniel Domelovo, the sacked Auditor General, who should have gone on leave? Is Woyome in jail as promised? Where is our money? The best Martin Amidu can do is to work to prove a point to his employer. He has to ensure Mahama is still tied to corruption whether it can be proven or not. But the best I think should do is to get himself out of the solitary confinement he’s been kept by Nana Addo and his NPP government since assuming power in 2017. He’s chained in the cage to watch while they (NPP government) loot and share. Amidu in chains can never catch a helpless pregnant mouse. It is not a curse but a prophecy.

I dedicate this epistle to Father Lion Ohenenana Obonti Krow. May his humble soul rest with his maker.