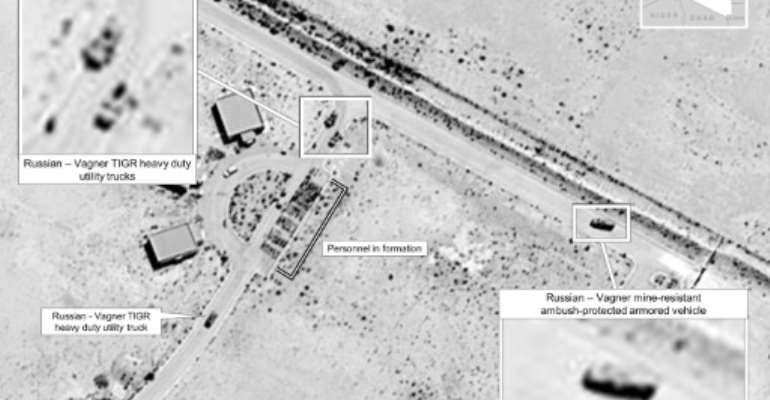 This July 14, 2020 satellite image released by the US Africa Command reportedly shows proof of Russia's involvement in Libya by showing Wagner utility trucks and Russian mine-resistant, ambush-protected armored vehicles in Sirte. By - (US Africa Command/AFP)

The Pentagon released satellite photographs that it said shows Wagner-supplied military equipment "on the front lines" of the Libyan conflict in Sirte.

US Africa Command director of operations Major General Bradford Gering said the photographs are evidence that Moscow is building its presence in Libya on the side of eastern Libya strongman Khalifa Haftar, who is fighting to seize power from the UN-recognized Government of National Accord in Tripoli.

"The type and volume of equipment demonstrates an intent toward sustained offensive combat action capabilities, not humanitarian relief, and indicates the Russian Ministry of Defense is supporting these operations," Gering said in a statement.

The Africa Command has documented Russia's provision, through the Wagner Group, of least 14 Mig-29 and Su-24 fighter jets to the Libya conflict.

Last week, Africom accused the group of laying land mines in and around Tripoli.

"The Russian Federation continues to violate UN Security Council Resolution UNSCR 1970 by actively providing military equipment and fighters to the front lines of the conflict in Libya," Africom said in the statement.

Payments Made To Customers Of Collapsed Banks, Others Must B...
5 hours ago