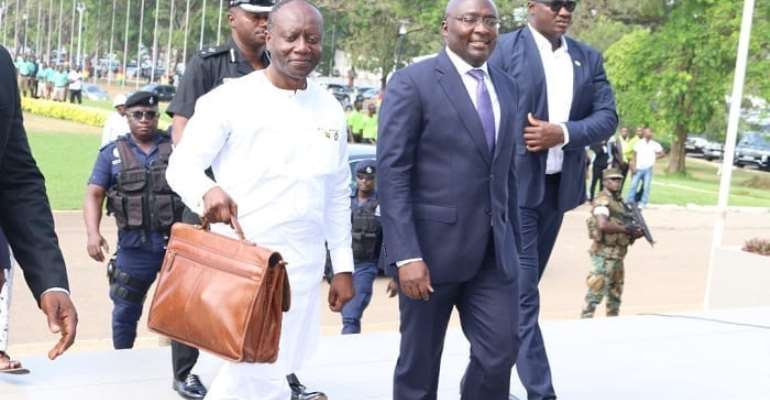 The Minority in Parliament have said the minister should use the opportunity to render accounts to the nation on all the accruals received for the COVID-19 pandemic fight.

The Chairman of the Finance Committee of Parliament, Dr Mark Assibey-Yeboah, however, told journalists a few days ago that Mr Ofori-Atta will not be doing that today.

Meanwhile, Economist Prof Godfred Bokpin has said the mid-year budget review, will not be the magic fixer of Ghana’s COVID-19-ravaged economy.

“There are no quick fixes, there is no immediate magic, a lot depends on prudent, greater sacrifice ahead of us”, Prof Bokpin told Kofi Oppong Asamoah on Class91.3FM’s mid-day news 12Live on Wednesday, 22 July 2020.

He explained: “We have seen a pandemic that hasn’t been tamed. The situation is very fluid. Since the beginning of this year, the IMF, the WB, the UN Economic Commission and all of that, have had to revise their projections more than three times. It tells you how fluid the whole thing is”.

“My suggestion to Ghanaians will be: let’s be very moderate so you’re not disappointed. Why am I saying so? If you look at the fiscal space, even pre-pandemic level, we didn’t have the flexibility to implement broad-based policies that can transform the lives of Ghanaians, policies that can take the macro numbers for it to reflect in the pocket of Ghanaians. We haven’t been able to do that even in normal times”, he observed.

From his assessment, the COVID-19 pandemic, which has, so far, killed 153 people in Ghana with a national tally of 28,989, has erased a lot of the economic gains made by the current government.

“Now, the little gains that we have made, even under this government, from 2017, because there’s no doubt that the economy has taken a turn for good since 2017, even those gains are practically being reversed”, he explained, adding: “The gains that have been made in the last 10 years, 15 years, also with the implementation of the Millennium Development Goals, where we celebrated that poverty has been halved and all of that, all those things are being reversed as we speak right now”.

He said the African continent is also feeling the heat of the pandemic.

“More than 27 million Africans are heading into poverty this year, about 45 million Nigerians are heading into food and nutrition crisis, it’s not different in the Sahel. Now, we are talking about in excess of 145 income losses to be recorded by Africa. If you look at Ghana, our GDP is going to decelerate sharply from about 6.8 per cent to about 1.5 per cent or even if it’s 2.5 per cent, that is very huge in terms of output losses, which will translate into income losses, so, this is where we find ourselves”, he pointed out.

“Now, if you look at Ghana, since independence, we haven’t had a problem with designing strategies. You can look at the Nkrumah, Busia, Kufuor, Mills and Mahama [administrations], our problem has been galvanising the necessary resource and institutional reforms, to translate those projections into useful broad-based inclusive outcomes for Ghanaians.

“And, it’s not going to be different with the mid-year review budget. Why am I saying so? Look at the statement the Finance Minister made in Parliament on the 30th of March. It tells you the deficit. Revenue remains dwarfed even though some of the tax handles have done quite well. Expenditure has gone up, mostly to contain the pandemic.

“Now, if you look at the fiscal stimulus that has been done, we have exhausted all of that. And yet, day in day out, more people are falling into the vulnerable group”, Prof Bokpin noted.

As far as what can be done to restore the economy is concerned, Prof Bokpin said: “A lot depends on the pillars that the government will identify to aid the recovery. That will be very very important since we don’t have money”.

“It is not also entirely our doing and Africa must fight this together. If you look at the global geopolitics and the world order, as it has been designed to be, it’s been done not to favour us and it’s going to expose us further and further hold us back from developing because of COVID-19”, he noted.