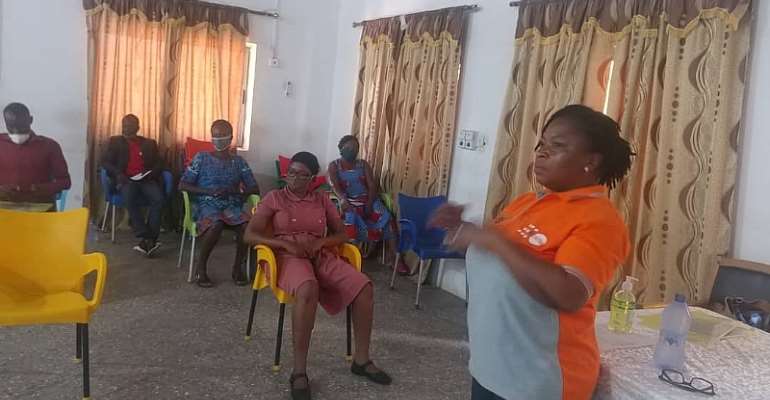 The Acting Regional Director of the Children Department of the Ministry of Gender, children and social protection, Madam Georgina Aberese-Ako

The Children Department under the Ministry of Gender, Children and Social Protection in the Upper East Region has called on Parents not customarily marry off teenage their girls who unintentionally get pregnant.

The Department has encouraged parents to provide an enabling environment for them to return to school after weaning off their Child.

Due to COVID-19 lockdown, there is a disruption of supply chains across the world and this has adversely affected the availability of contraceptives increasing the risk of unintended and unwanted pregnancies.

In an interaction with modern Ghana on line, the acting Regional Director of the Children Department of the Ministry of Gender, children and social protection, Madam Georgina Aberese-Ako bemoaned the incident of off the court settlement for sexual assault and defilement case filed at Domestic Violence and Victim Support Unit.

A Child Protection baseline research report in 2014 revealed that sexual abuse of young girls is common in the Upper East Region. Such abuse is normally committed by adult men and parents to fail to report the perpetrators for fear of stigma which could cost girls their marriage prospects.

In rural areas, sexual abuse is related to an intention to marry the victim; while children aged 13-17 are abused by men who can provide them with money and food in exchange for sex. According to the 2014 baseline study, the region has about 41.5% of the population aged below 14 years and has one of the highest rates of commercial sexual exploitation with 68.3 percent of children and 58.3 percent reporting that children in their communities have fall prey to such exploitation.

The Acting Regional Director for the Children Department, Madam Georgina Aberse-Ako encouraged parents to make time with their children especially their girl child to create the needed bond to facilitate problem-solving.

She expressed the worry that the irresponsibility of some parents forced them to fend for themselves exposing them to social vices. This she says results in sexual exploitation, unwanted and unintended pregnancies.

Madam Aberese-Ako encouraged the introduction of family planning methods to adolescent girls who are sexually active, not intended to promote promiscuity bu to reduce teenage pregnancy.

Responding to Sexual and Gender-based violence that has increased in some communities especially during this lockdown, the acting Upper East Regional Director for the Department of Gender, James Twenne bemoaned the negative cultural practices that promote sexual and gender-based violence in the region.

He disclosed that with support from United Nations Population Fund, the department has set up 36 men and boys group to sensitize them on gender and sexual violence issues for them to relay the information to members of the community.

Speaking on some challenges the department is faced with Mr. Twene mentioned which includes financial constraints, inadequate vehicles for the department, and inadequate staff. While expressing gratitude to the chiefs, traditional rulers, NGOs for their support he appealed to government, stakeholders, NGOs, and other institutions to resource the department to implement their policies and programs.