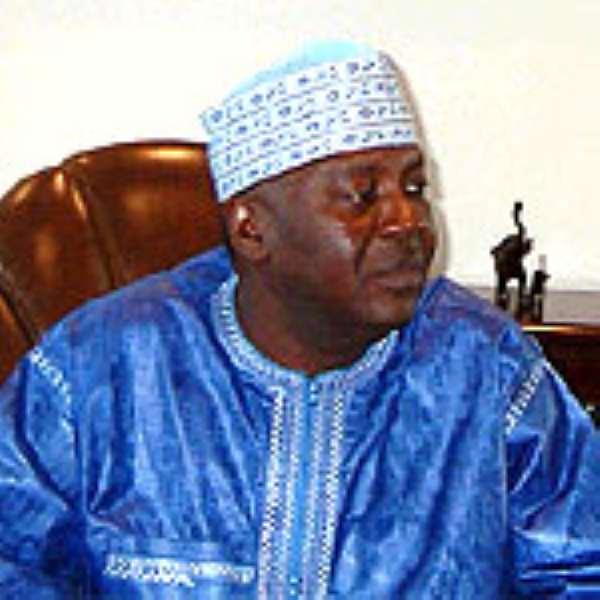 The Vice President, Alhaji Aliu Mahama, last Monday inaugurated a 1.76 billion-cedi 14 units single storey market stores at Aboabo in the Tamale Metropolis in the Northern Region and urged the people to maintain the facility to enhance their economic activities. He said the facility was important as it would offer employment opportunities to the people and help to reduce poverty.

The Vice President said though business seemed to be doing well, there were pockets of serious poverty not only in the metropolis but also in the entire region. He said it was in this regard that the government initiated the Youth Employment Programme and the Millennium Challenge Account and called on the youth to take advantage of the programme to help reduce poverty and improve on their living conditions.

The Vice President urged the Tamale Metropolitan Assembly to use the resources from the Millennium Challenge Account to improve agriculture, water, sanitation, health facilities and small-credit schemes for the people.

He said a 4.6 million-dollar World Bank Sanitation and Community Infrastructure Upgrading Project would soon take off in the metropolis. It would be used to give Tamale a facelift while the Metropolitan Assembly is also collaborating with the Ministry of Energy to provide streetlights to the city.

Vice President Mahama reminded the people in the region, especially those in the Tamale Metropolis, to co-operate with the contractors building the sports stadium for the smooth completion of the project.

"As a host city, we must prepare ourselves to receive a large number of foreigners who will visit our city to watch the matches. "We must extend the best of courtesies and hospitalities to the visitors so as to create a good and impressive image for ourselves, our city and the nation as a whole," he said.

Vice President Mahama expressed concern about the alarming prevalence rate of HIV/AIDS in the country and urged the youth to live disciplined and responsible lives to avoid being infested with the disease since it has become an obstacle to the socio-economic progress of the country.

He also called on people in the Northern Region in particular to strive to maintain the peaceful atmosphere that was currently prevailing in the area. "We have come a long way and I hope we would jealously guard and build on the gains we have collectively made through compromise and self-sacrifice," he said.

Mr Adam said the assembly had engaged in discussions with some private investors and the Social Security and National Insurance Trust (SSNIT) to complete the abandoned Aboabo multi-purpose market complex. He said the assembly was collaborating with the Regional Coordinating Council (RCC) to provide a modern Information and Communication Technology Centre in the metropolis to serve the business community.

Minority will reject move by gov’t to purchase new president...
34 minutes ago